In the spring of 2009, I was helping students at four different schools in Washington, DC complete class projects for their respective school auctions.  One of the most popular class creations was a Warhol inspired painting.  For this project I would copy pictures of the children onto rice paper using a Xerox copier.  They would then paint self-portraits using bright and whimsical colors.  I could not print the photos with an ink jet printer because the colors would run.  I could not print the photos with a laser printer, as the laser image would not take paint.   I would copy face after face and dry toner was my friend. 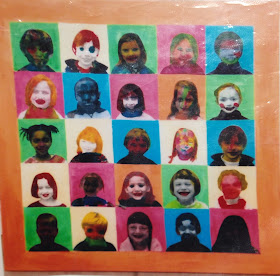 In the spring of 2009, husband Fred was hospitalized with stage four cancer.  I still had to finish the class creations while I cared for a very sick husband.  The night I finished the last Warhol project, I cried and cried above so many copied faces.  I had been researching my husband’s condition; I knew there was a great chance he would die soon.  Late into the night I worked on that project, my tears mixed with the gel medium as I adhered each little face.  The colors did not run, as my mind raced and dry toner was my friend.

A few weeks ago Jim Mignano reached out to me, he works with Xerox Healthcare.  He was very impressed with The Walking Gallery and my focus on the patient perspective in healthcare.  He asked if I would be willing to come to Las Vegas for HIMSS 2016 and be their guest.  Would I be willing to paint in the Xerox booth?

Soon after Tamara StClaire, Chief Innovation Officer at Xerox Healthcare, reached out to me about joining The Walking Gallery.  She is passionate in her belief that we are on the cusp of great change in medicine.  At the intersection of Genomics, HIT and mobile devices a swirl of creation is advancing.  Tamara is determined that technology advance in a way that is patient centric.

So, I titled her jacket painting “Determination.” 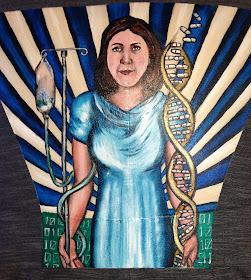 Soon Jim and the Xerox Healthcare team were asking if they could host a gathering of The Walking Gallery at HIMSS. On Tuesday March 1, 2016, I painted all day in the booth and created the painting “Behind the Scenes at Xerox Health.”  When the day began the entire team had a planning huddle.  They invited me to explain my work and explain why I would be painting among them throughout the day.  During the huddle, I was informed that all the lanyards we wore were color-coded based on the individual’s product knowledge and expertise.  This was a great system, as I would often need to guide booth guests to the correct person.  I liked the idea so much I used those colors into the painting.  The title of the painting and the visual theme was inspired by a phrase I often heard from passersby, “Hmm, Xerox.  I didn’t know they worked in health.” 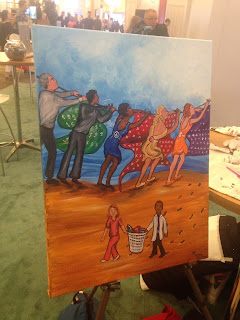 At 1:30 The Walking Gallery gathered and it was exciting to see so many friends in the Xerox booth. So many members were present that we flowed into the booths beside Xerox. (Photos below taken by Xerox Healthcare Photographer) 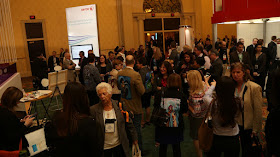 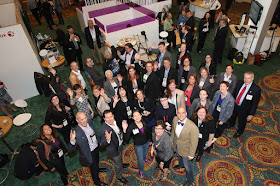 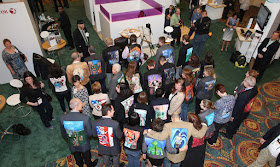 On Wednesday the 2nd, I created another HIMSS painting entitled,  “Value Based Care vs. Fee For Service.”  This painting was based in great part on the results of a survey Xerox Health recentlycommissioned.  This painting was representing the adoption rate for doctors and practices for the new value based care payment model. 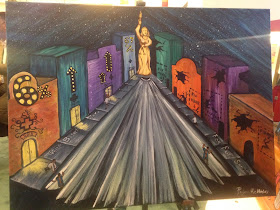 Later that evening, I would finish my last painting.  This canvas would be painted whilst I took part in a round table discussion about the landscape of care in the US.  In the prior two paintings, I plenty of time to paint and hours of overheard discussions to build on.  The evening painting had to be completed within three hours.  I opened my mind’s eye and looked for a vision.  I saw a flying saucer with the Xerox emblem.  So although that was a very odd thing to paint, I began my brushwork, connecting the ship above to the buildings below.  Then I titled the painting, “Investigating the Idea.”  I finished the painting and handed it to the great folks sitting at the tables.  An employee asked me, “How did you know we call Xerox the mother ship?”  I looked at her and quietly laughed.  I didn’t know, but I guess my brush did. 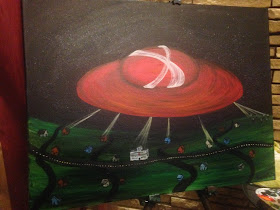 Then I gathered up my supplies and left Las Vegas.  I left happy and a bit tired.  Much had been accomplished in two days.  The Xerox Healthcare team was incredibly kind and I am very glad they invited me to the table. 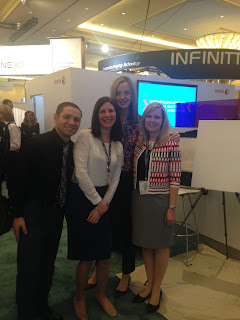