The Web We Weave

On January 29th, 2014 I was honored to present at the 1st Health Informatics Tri-State Summit on the campus of the University of Southern Indiana in Evansville.  The room was filled with energetic folks with interesting questions.  I was honored to present and paint.  This was of those venues where I painted in the front of the room and occasionally threw out questions to the speakers whilst painting.

At the event, I painted this piece entitled: “The Web We Weave.” 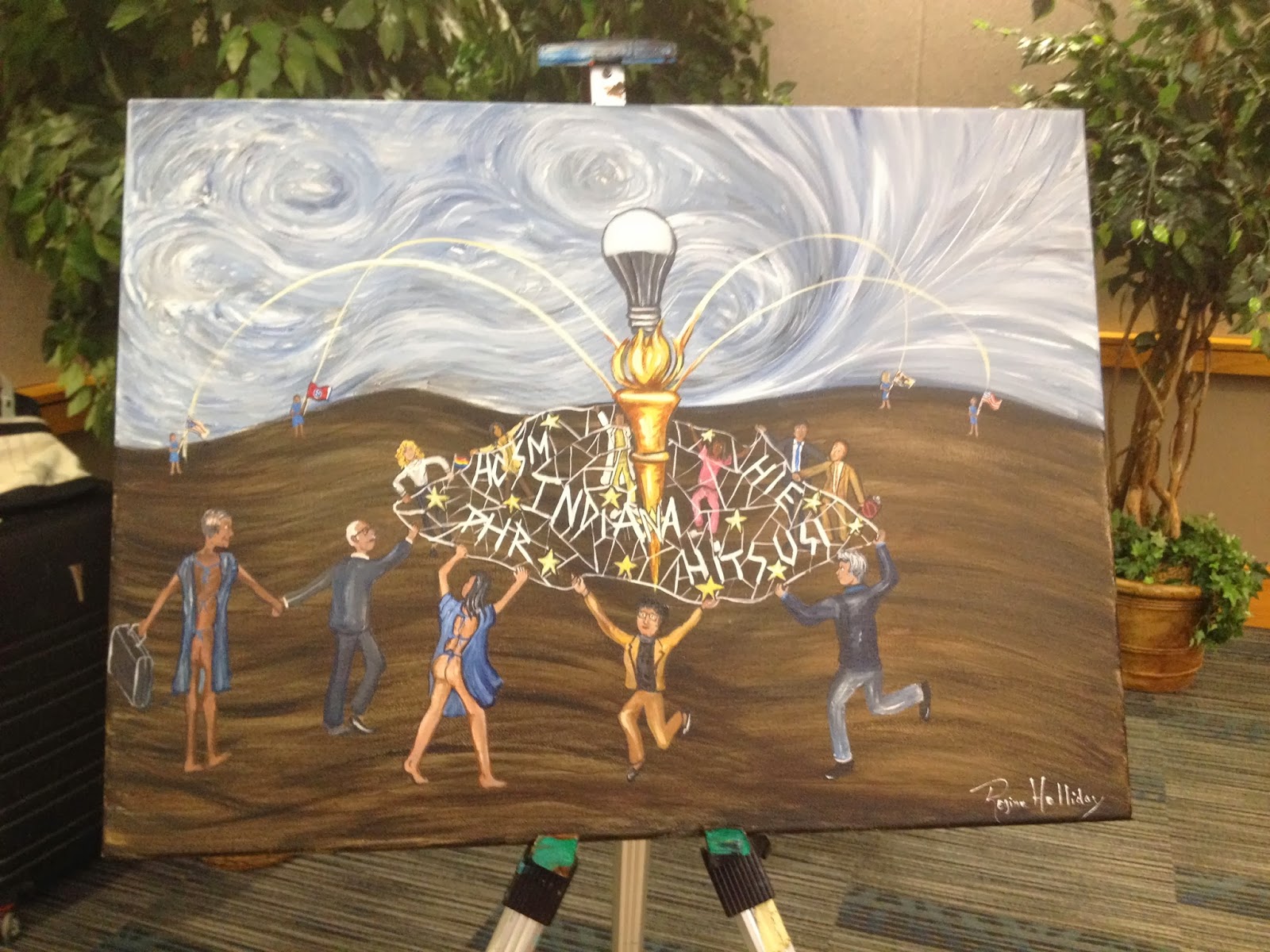 Gabriela Wilson began the day by greeting us warmly.  Peggy Graul explained the schedule of the day.  She even mentioned the twitter hashtag: #hitsusi and that made me very happy.  You can see it archived on Symplur. While they spoke I painted a swirling winter sky. As they explained the foundation upon which they plan to build future conferences, I painted the new earth ready for seeds.  Then I put down my brush and began to speak. 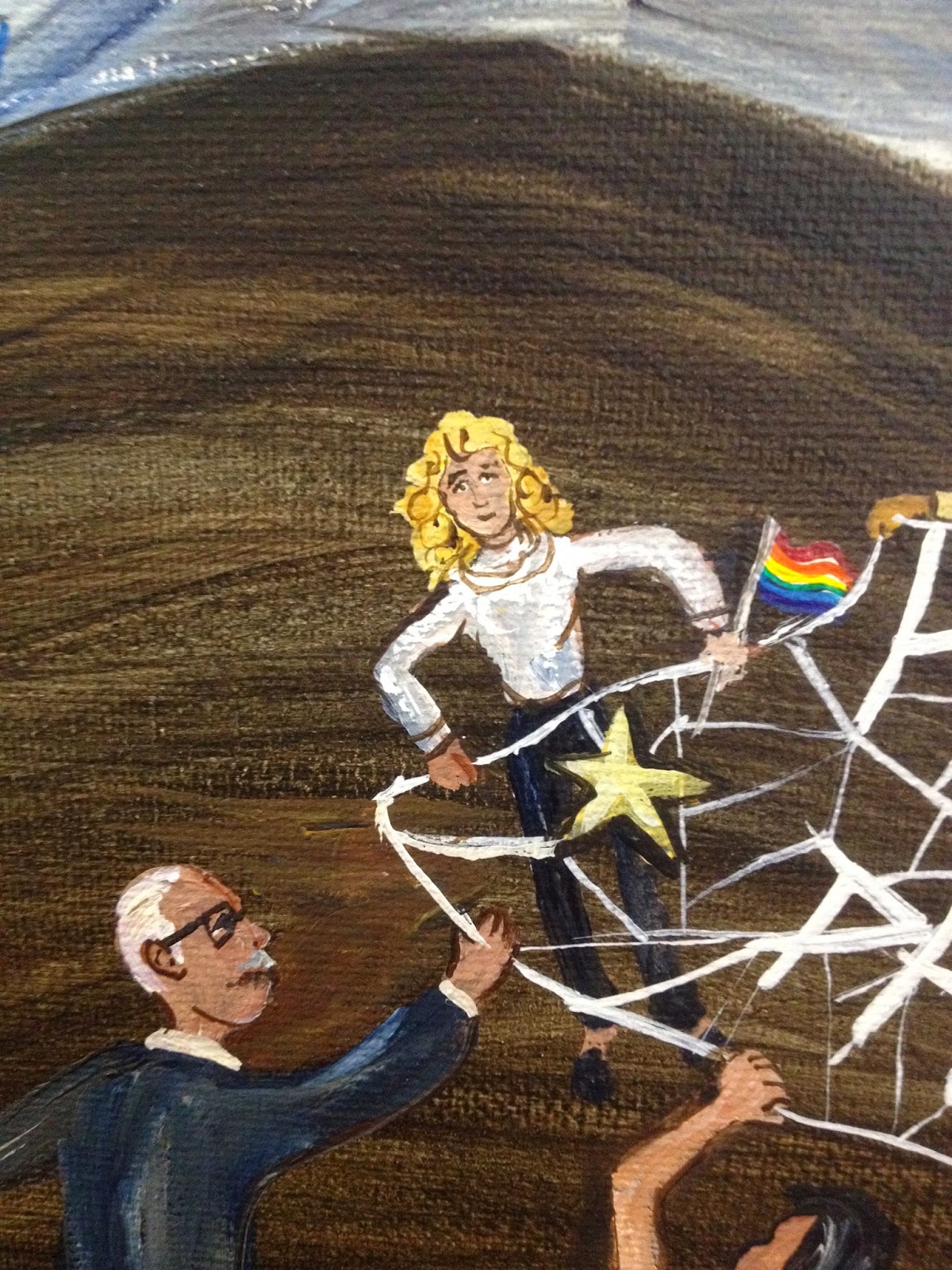 I delivered a speech entitled the “Power of Stickers” at 9:15.  It was very well received.  After my presentation some audience members spoke to me during the break.  One was a lovely woman mentioned she was going to DC soon with her life partner to be married.  I painted her into the painting at the upper left holding a small rainbow flag. 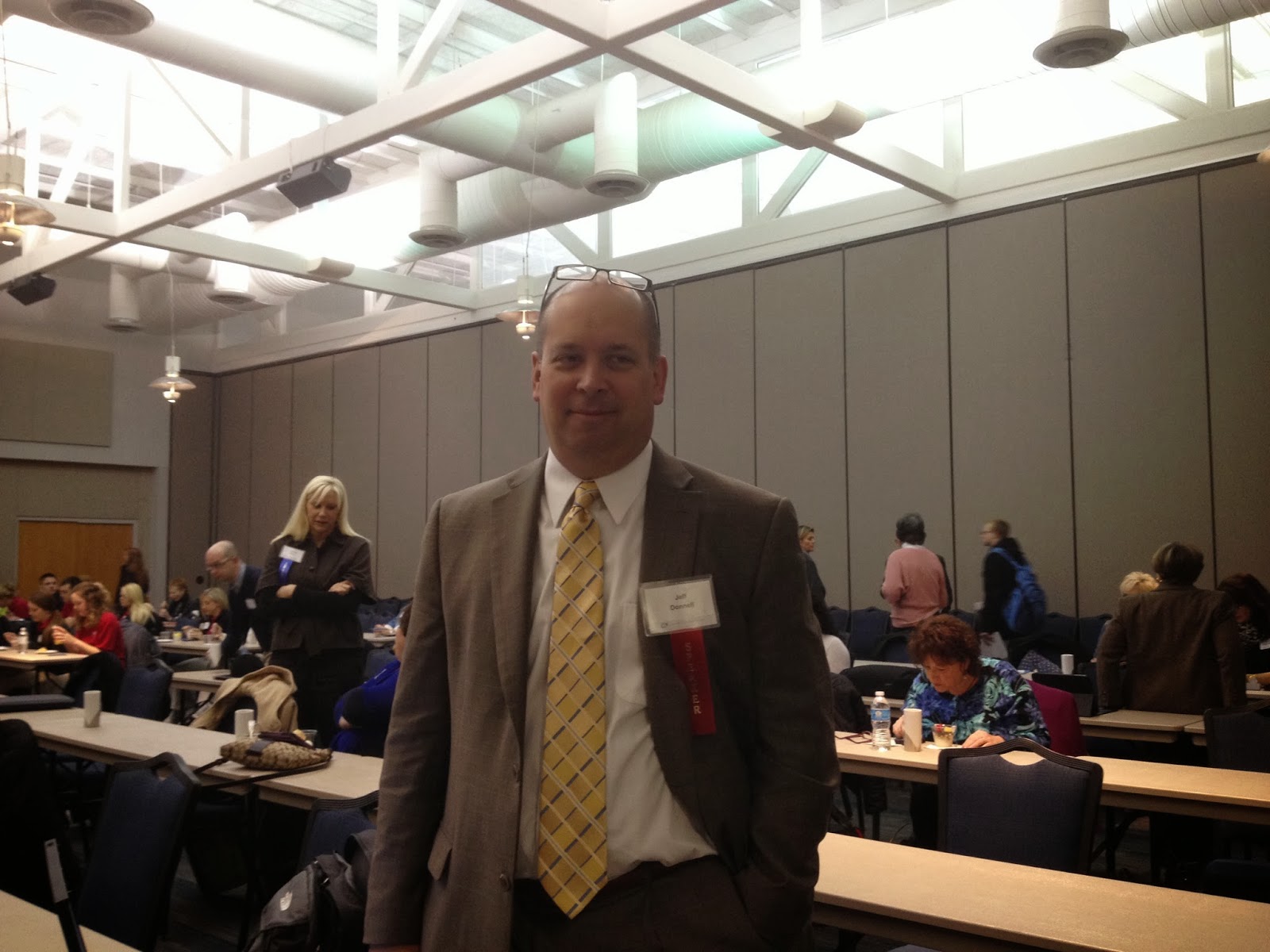 At 9:30 I was so excited to see Jeff Donnell, President of No More Clipboard speak.  This is my third time to see him speak and he is always great.  He began by blasting bad stock photography of patients used by so many healthcare institutions.  He explained what was happening in the HIE (Health Information Exchange) in Indiana.  They are doing some great work. They are also working on a pilot that got me so excited I copied its title right from the state of Indiana HIE site: “Implantable Cardiac Device Consumer Data Integration -- Use HIE to engage the patient in care management for chronic conditions and diseases by allowing health data to flow from an implantable cardiac device to both an EMR/patient portal and the patient’s PHR.” 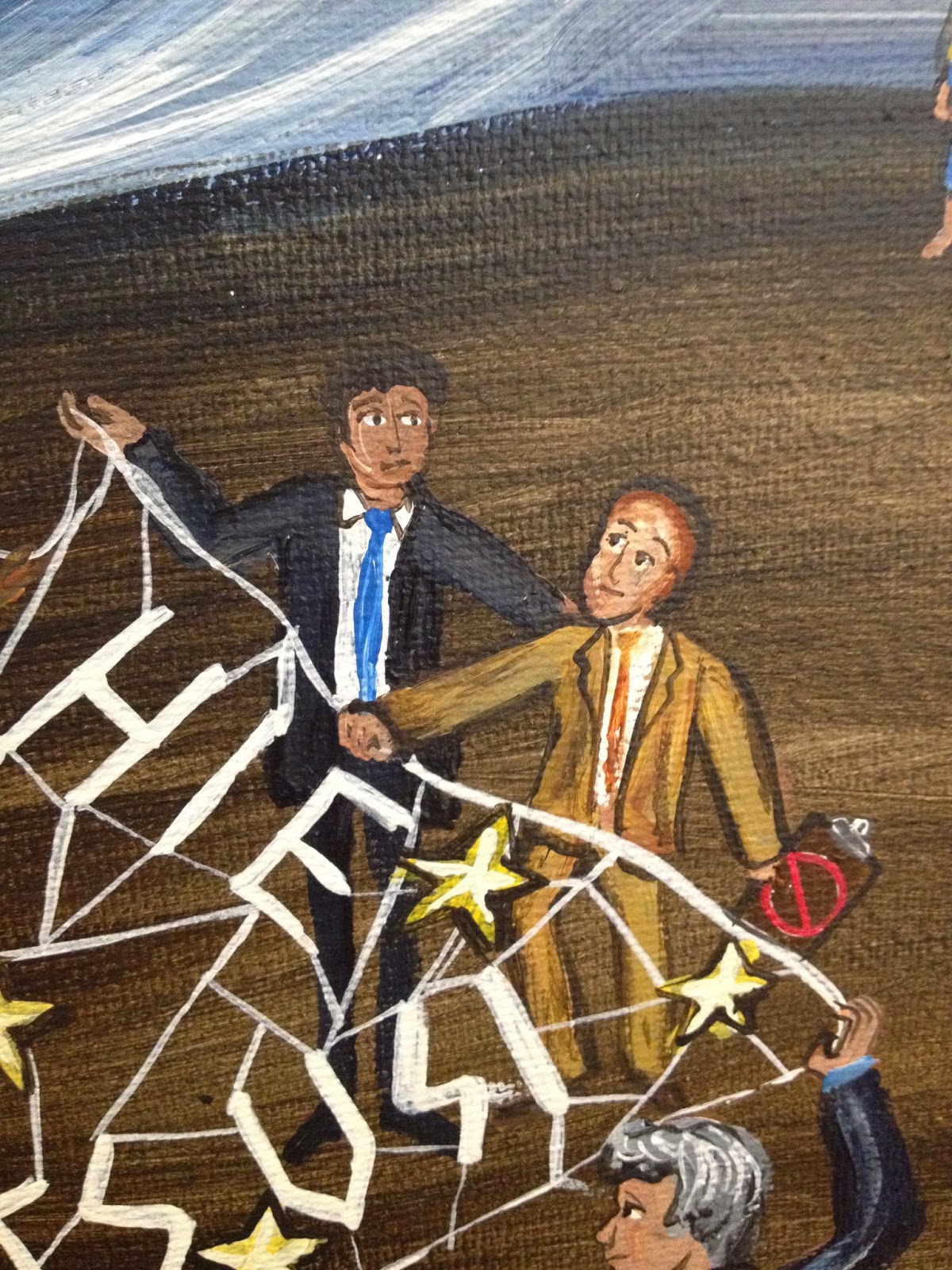 While Jeff was discussing these topics I began to paint and HIE web into the painting.  This wasn’t the beautiful web of the orb spider. This was a cobweb.  I have attended HIE meetings all over the country.  Some systems are successful some are not, but most were built in fits and starts without a concept of over all design.  But like the common cobweb these structures still do the job of catching things.

Then Jeff spoke of his work trying to incorporate patient data access to the HIE as part of an ONC Challenge Grant.  He said he now knows why they are called Challenge Grants because there was no blue print for patient access.  Then I realized the metaphor of a cobweb was more sweeping than was intended.  Unlike orb spiders, cobweb spiders do not live in their webs; they just use them and abandon them.  I fear HIE’s may suffer a similar fate if the patient is not made at home within their structure. 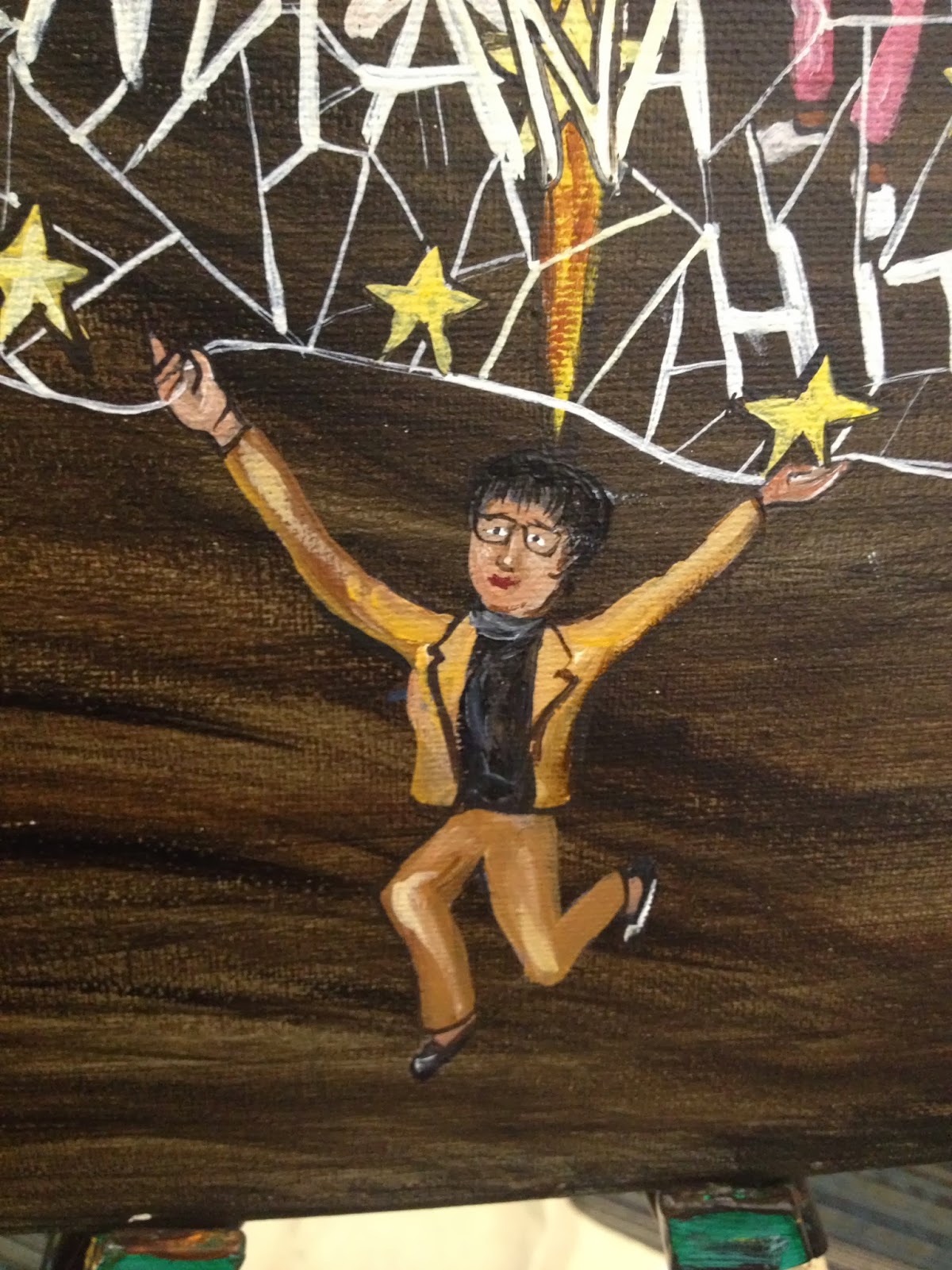 I painted a circle of people holding up the web.  Peggy Graul is front and center since she brought us the conference.  Jeff stands, clipboard in hand to the right distant side of the web.  He stands beside our next speaker Andrew VanZee.

Andrew is the statewide Health IT Director. He elaborated on Jeff’s point and informed us of his focus on folding rural communities into the structure of an HIE that was designed with metro areas in mind.

Next we had a lovely lunch.  They sat us all in the same room at long tables instead of table rounds.  It was great!  It felt a little bit like eating in elementary school when friends surround you. 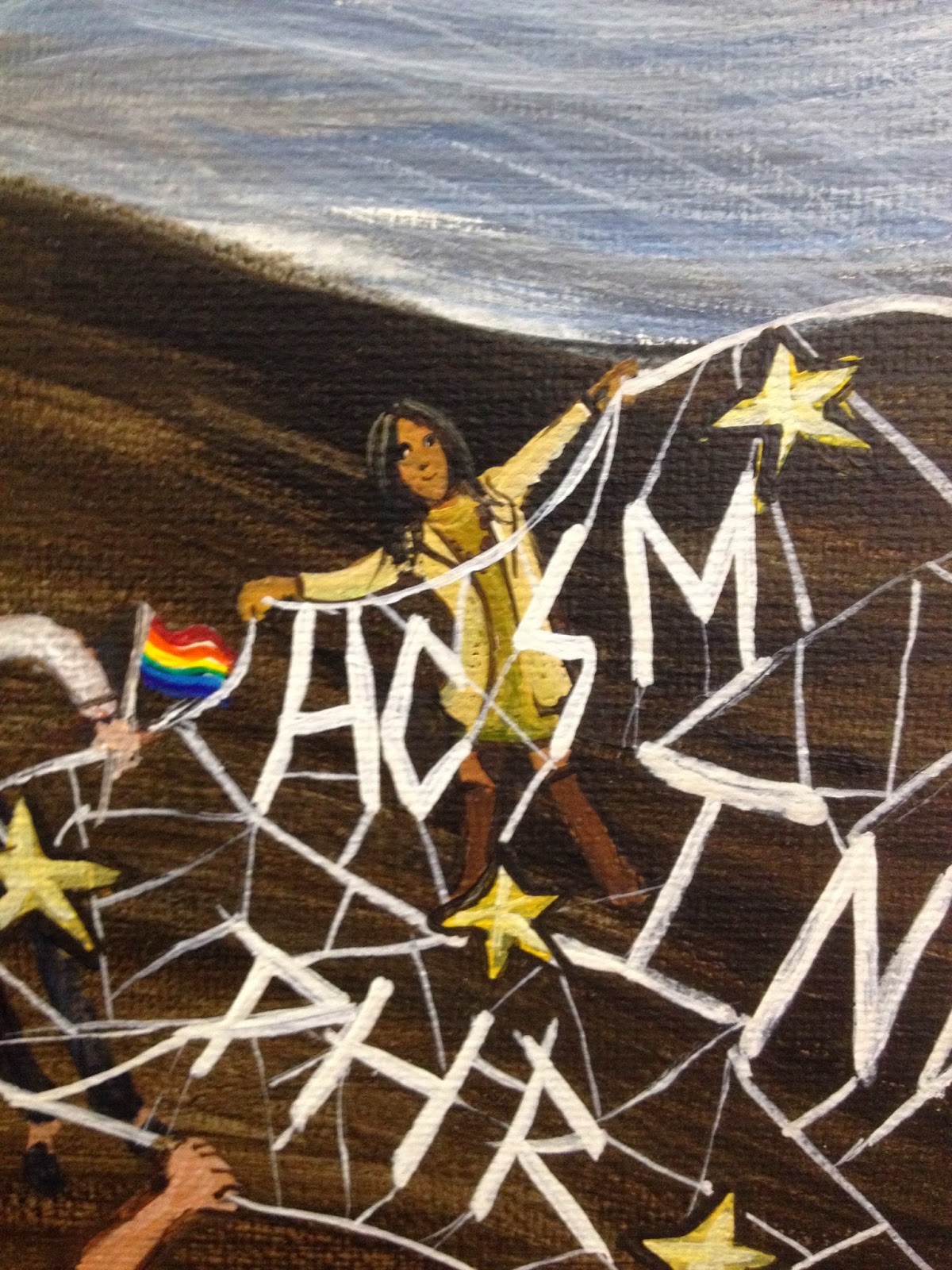 Next up was Sunny Williams, VP of business development Telemon Corporation.  This was a high level talk about technology and telecommunications and how they apply it to healthcare. I placed Sunny to the far back left of the painting.  Her speech was a good speech about an interesting topic, but seemed out of phase with the other speakers.  This crowd had a relatively low adoption of social media and needed more information focused on their unique needs.  I did tweet my disagreement with her statement: “Who has time for social media with all you have to do?  There is a paid (marketing) workforce that does it.”  Social media is always more real and therefore successful when it is done by the individuals within an organization.   If social media is done well, you will have more free time, not less. 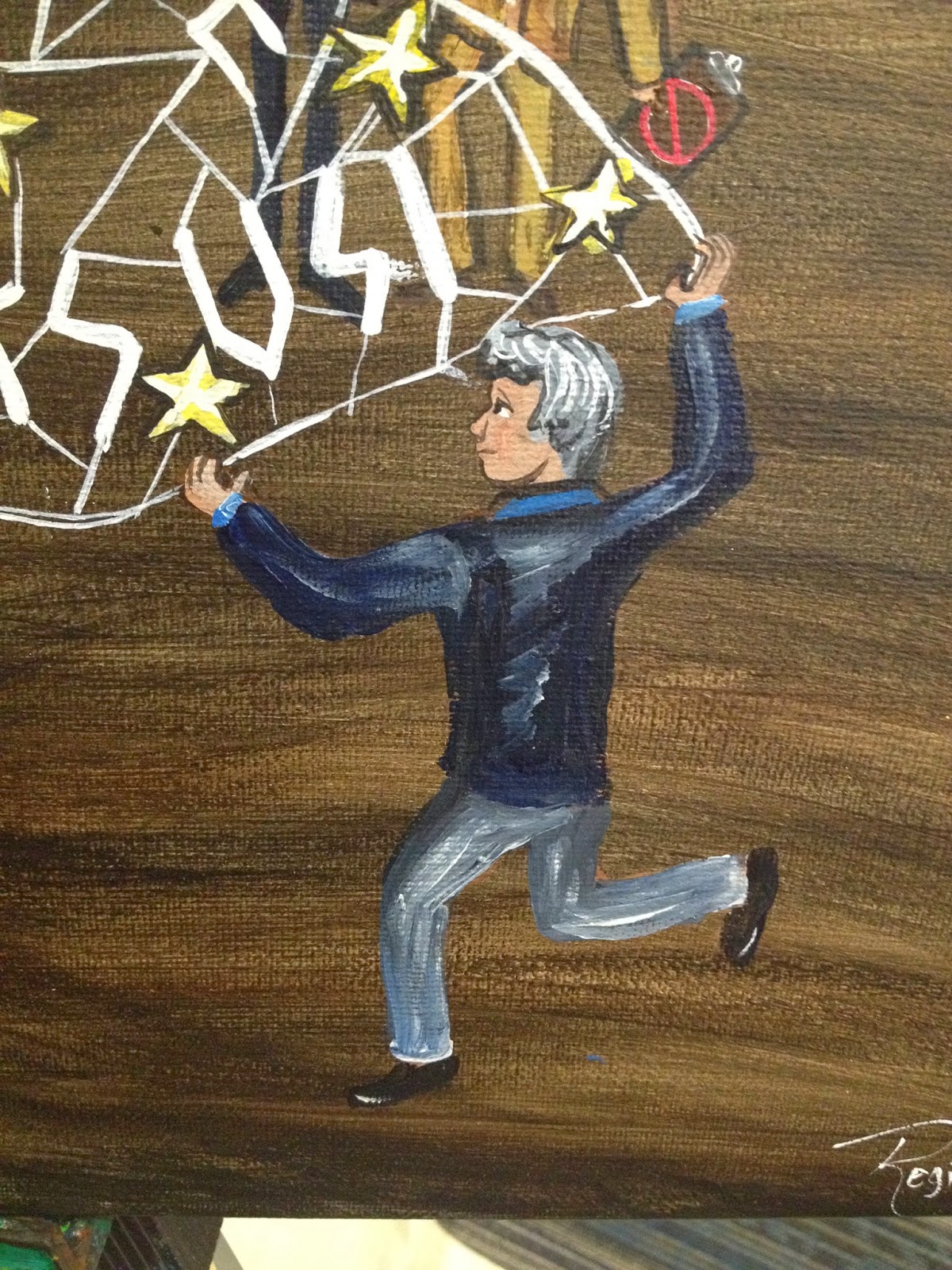 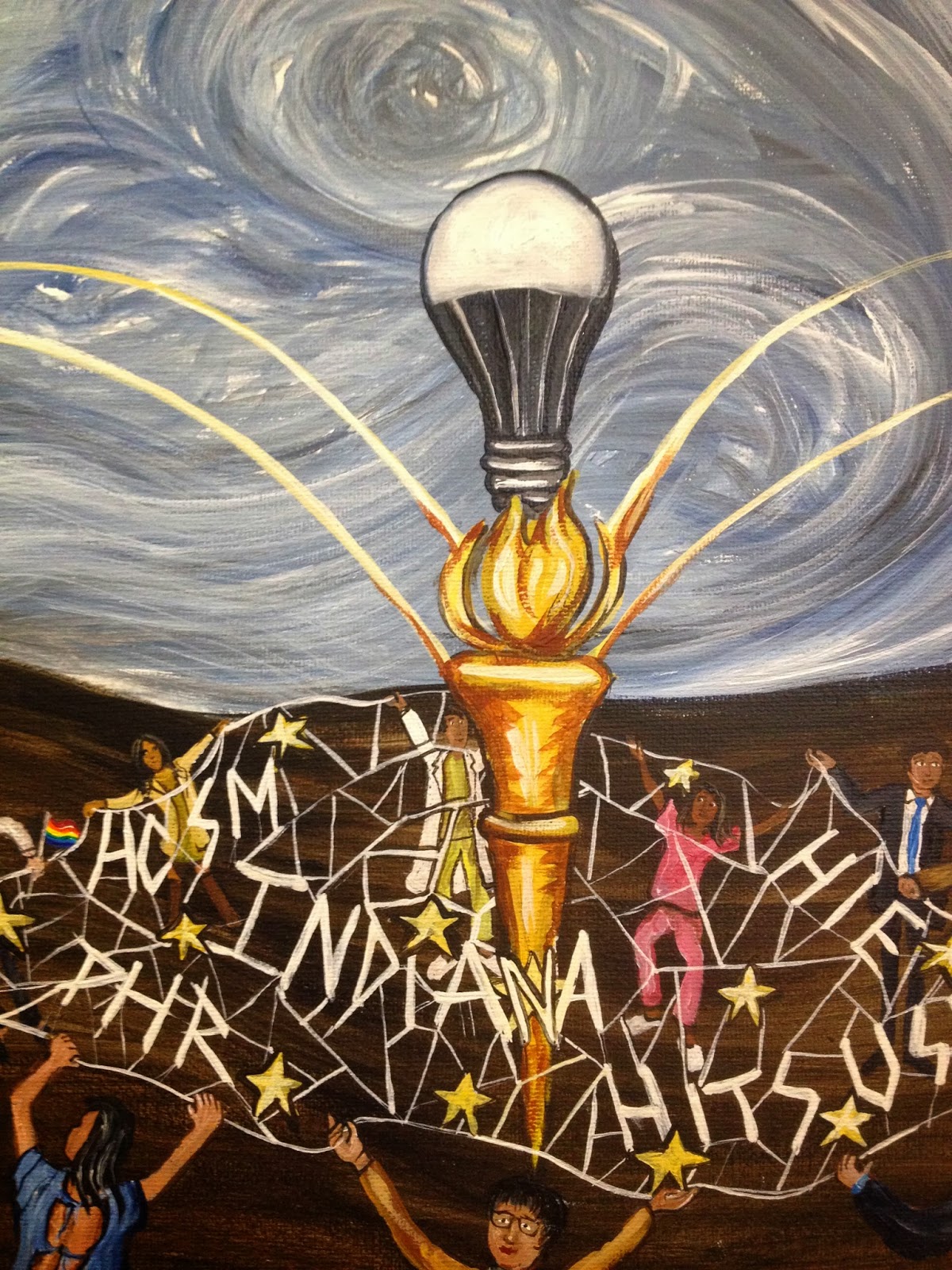 Next Keith Kelley, VP Professional Services, Indiana Health Exchange began to speak and I painted him into the lower right side of the painting.  He was a great speaker and as he spoke the room became more informal with folks joining in shouting out questions and answers.  He added greater nuance to the words spoken by Jeff and Andrew earlier in the day.

Giving examples of HIE was working in Indiana, he mentioned that some towns with competing hospitals are sharing info with their Cerner systems. He ended his talk with stating consumers would be the ones to change health care. While Keith spoke, I realized a focal point was missing from the center of the painting.  I decided to stick the torch from Indiana’s State flag right in the middle of the web.  It would act as a beacon to other HIE’s in the nation.  The torch shoots out sparks to its border brethren and in the distance we see the flags of Ohio, Illinois, Iowa and the United States. 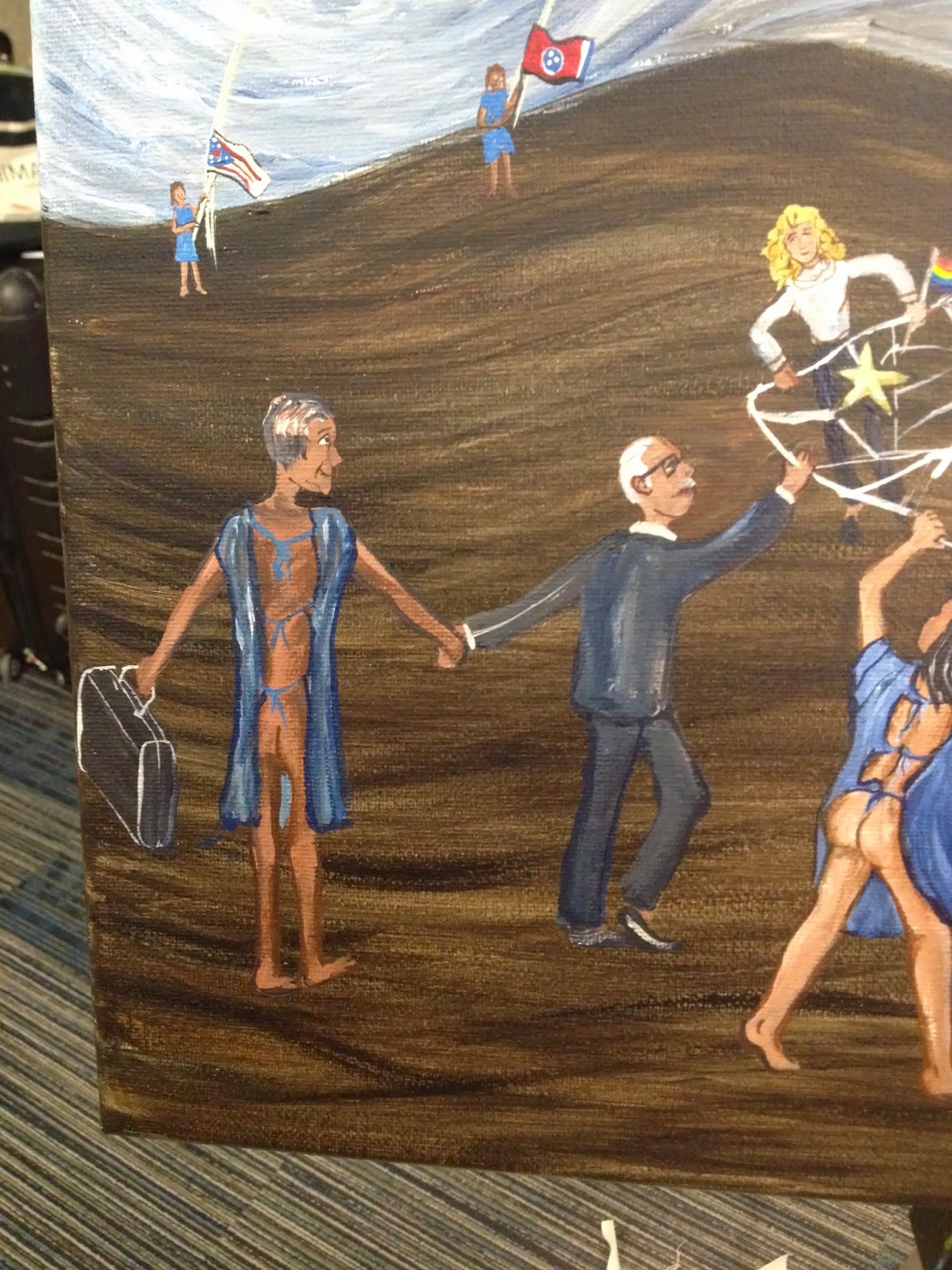 Next Robert Hoyt, MD, Director of the Medical Informatics Program School of Allied Health and Life Science at the University of West Florida began to speak.  The last time I heard a speech with the breadth and detail that Rob gave was when I saw Eric Topol present at HIMSS in 2013.  His title was : “The Future of Health Informatics Don’t Blink.”  He covered so many things from sensors to legislation to culture. These were all important topics, but the part I painted was about a patient encounter.  Robert shared that when he was a young doctor he saw an elderly patient who had been seen by so many providers but not one of them had told the patient he was terminal.  Dr. Hoyt went over the man’s medical record and explained what things meant and that these tests and these treatments meant that he was dying.  The man thanked him.  The man just wanted to know.  So I painted the man holding hands with Robert.  The man’s bag is packed and he is ready to go. 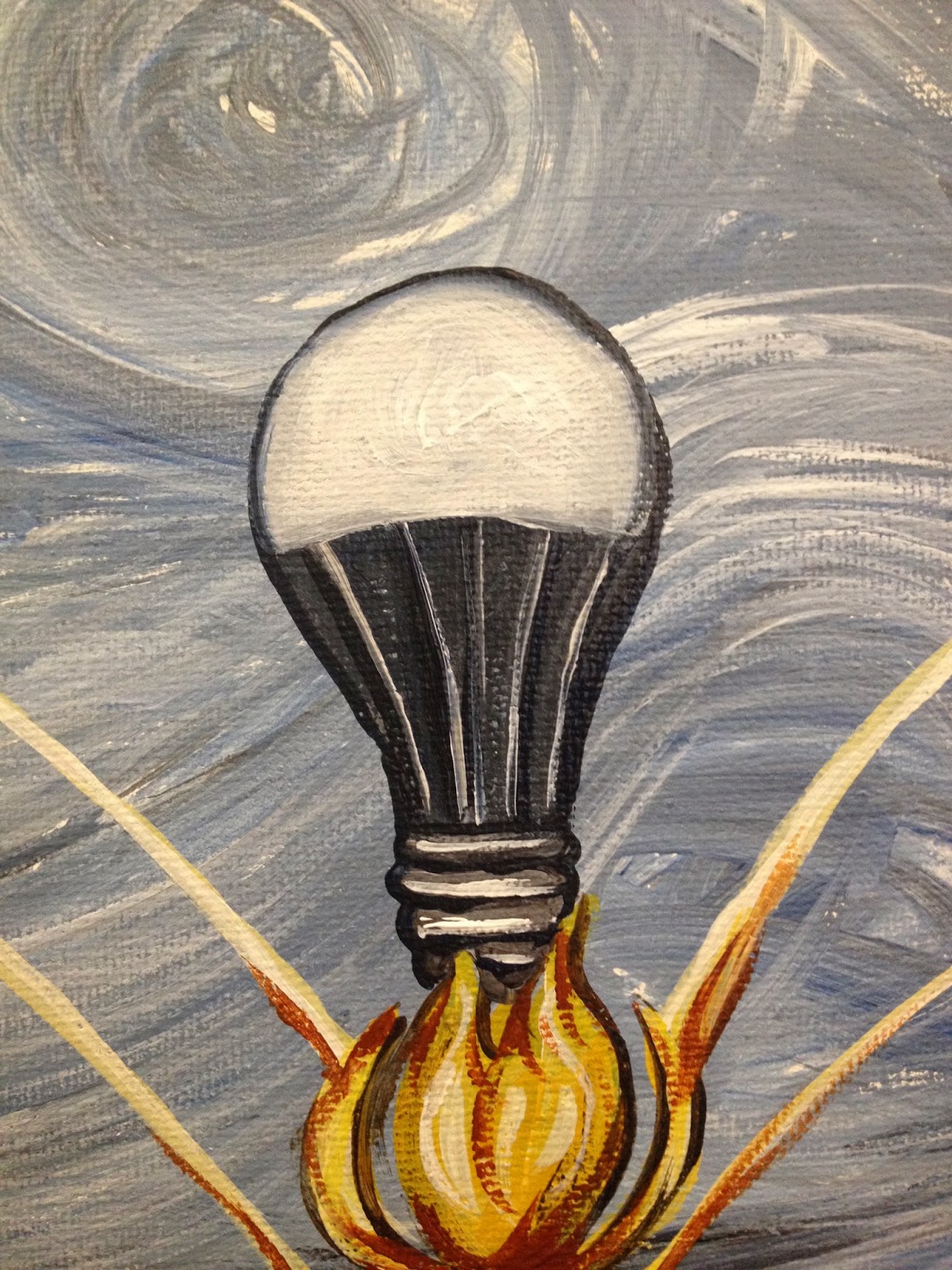 The last element in the center above the torch is an LED light.  Right now in my life I am moving into a new house. The old 1930s light fixtures need 10-watt bulbs.

A few years ago, that would have meant ripping out fixtures and replacing them.  Now with LEDs that is no longer necessary.  This is the beautiful thing about technology.  When it works well, it allows us to take more time for other things like caring for others.  It gives us the light to appreciate old-fashioned things and concepts, like holding hands while someone is dying.

Posted by Regina Holliday at 6:41 PM