What does the “Cinderblocks2: The Partnership with PatientsContinues” conference (in Grantsville, MD pop. 825) and Doctors 2.0 & You conference (in Paris, France pop. 2 million) have in common? 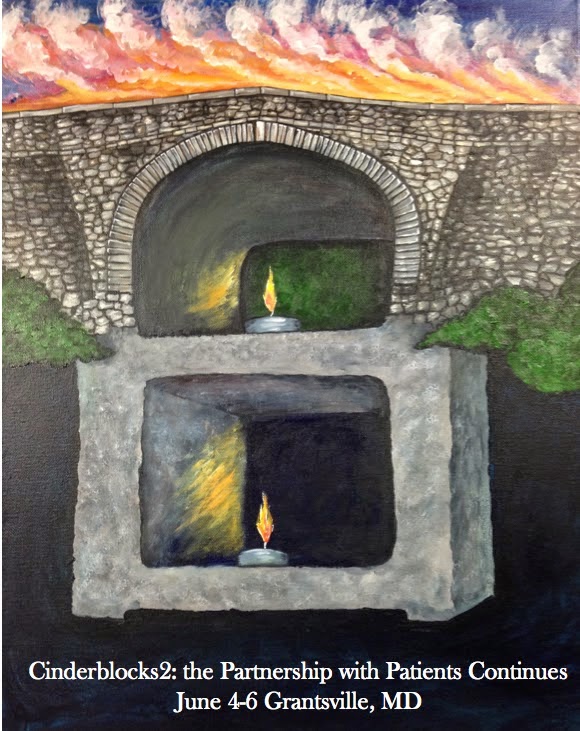 Both events are focused on innovation and better communication within healthcare.

Doctors 2.0 has the over arching goal of identifying the ways in which the inclusion of health 2.0 tools and social media platforms can improve care.

Cinderblocks2 is a mash up of art, activism, medicine, social media, HIT, patient rights and fire-dancing.  It is sort of like if Burning Man met healthcare.

Both events were founded and are organized by two powerful women:

Denise Silber is the founder of the Doctors 2.0 & You conference series. She is a healthcare social media influencer, keynote speaker, and valued strategic advisor.
Denise was awarded the French Legion of Honor in 2011 for her work in promotingeHealth trans-Atlantically. A Smith College graduate in Government, Denise wasa US Foreign Service Officer before getting her MBA from Harvard BusinessSchool. She then spent 9 years in the pharma industry before creating her own medical communications companies and helping to found digital health start-ups.
As for Cinderblocks, I am Regina Holliday.  Sometimes called the Rosa Parks of Healthcare.  I graduated Sapulpa high school in Oklahoma. (GO Chieftains!) I worked retail for 16 years before my loving husband Fred died of cancer in 2009; then I became a patient rights activist and artist. I am a keynote speaker, a health information technology change agent and am currently creating The Walking Gallery Center for Arts and Healing in Grantsville, MD.

Both events are on the same days!!!

The most important thing both events have in common is that they will benefit from Patient Travel Scholarships issued by the Society for Participatory Medicine!

In 2012, The Society for Participatory Medicine created a patient travel fund so they could award ten $500.00 patient travel scholarships. These were issued to patients so they could afford to attend Cinderblocks1 in Kansas City.  We crowdfunded the money and we asked for direct donation to the site.  We were successful thanks to many kind donors.

When Denise pointed out that our events were on the same days she said it would be great if we could connect them in some way, so we decided we are going do some live streamed interviews between the two conferences. But why stop there?  I said that the Society for Participatory Medicine (#S4PM ) was going to provide patient travel scholarships once again for Cinderblocks, would she like to include Doctors 2.0 in the competition?  She said yes!  #S4PM said yes, they could issue awards for either event!!!

SO…. One day after I announce that HIStalk is epically cool and issuing travel scholarships for HIMSS,

I am announcing that the Society for Participatory Medicine will issue $500.00 Patient Travel Scholarships to attendees of Doctors 2.0 or #Cinderblocks2.

You must post a blog entry by March 31, 2015 NOW EXTENDED to April 20, 2015 explaining why you want to go to either Doctors 2.0 or Cinderblocks2 and why a patient travel scholarship is needed.

You must send a link to the post to me by either twitter or facebook prior to  March 31, 2015 NOW EXTENDED to April 20, 2015 If you do not have a blog, please send me your post as an attachment and I will find a blog you can post on as a guest blogger.

You must also encourage people to donate to the travel fund. These scholarships will come from donations to the fund. I will do my best to encourage companies to sponsor folks but I have found when it comes to patients many small donations add up. (Below is just a screen shot you must go here to donate.) 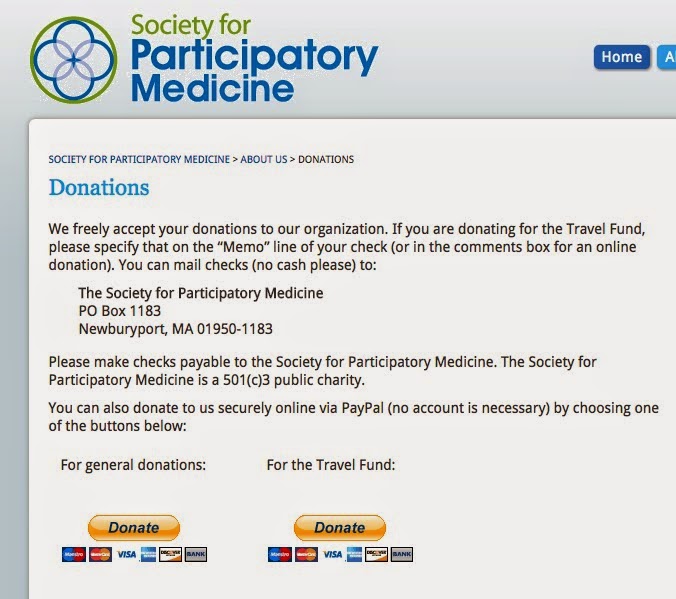 How will you be judged?

We will judge entries based on writing ability and need.  We will announce the winners on March 31, 2015 April 24, 2015. Payments will be issued after the conference events.

Responsibilities of the winners:

You will need to attend the conference of your choice.  We encourage you to use social media during the conference.  We will need you to post a report of your experience on a blog.  After these responsibilities are fulfilled, the Society for Participatory Medicine will issue the $500.00 scholarships.

It is sure a great time to be a patient activist! Spread the word and good luck!
Posted by Regina Holliday at 10:51 AM No comments:

Last year I had the opportunity to do an amazing interview with Tim from HIStalk.  It was a wide-ranging discussion that covered a great deal of the HIT (health information technology) landscape.   Toward the end of our conversation, Tim and I began to talk about the challenges patients face attending HIMSS.  Many patients would like to go this enormous conference with its thousands of attendees, great educational sessions and access to numerous health care venders; but cannot afford to pay for hotel lodging, airfare and an attendee pass.  We talked about the possibility of working together to create patient travel scholarships. 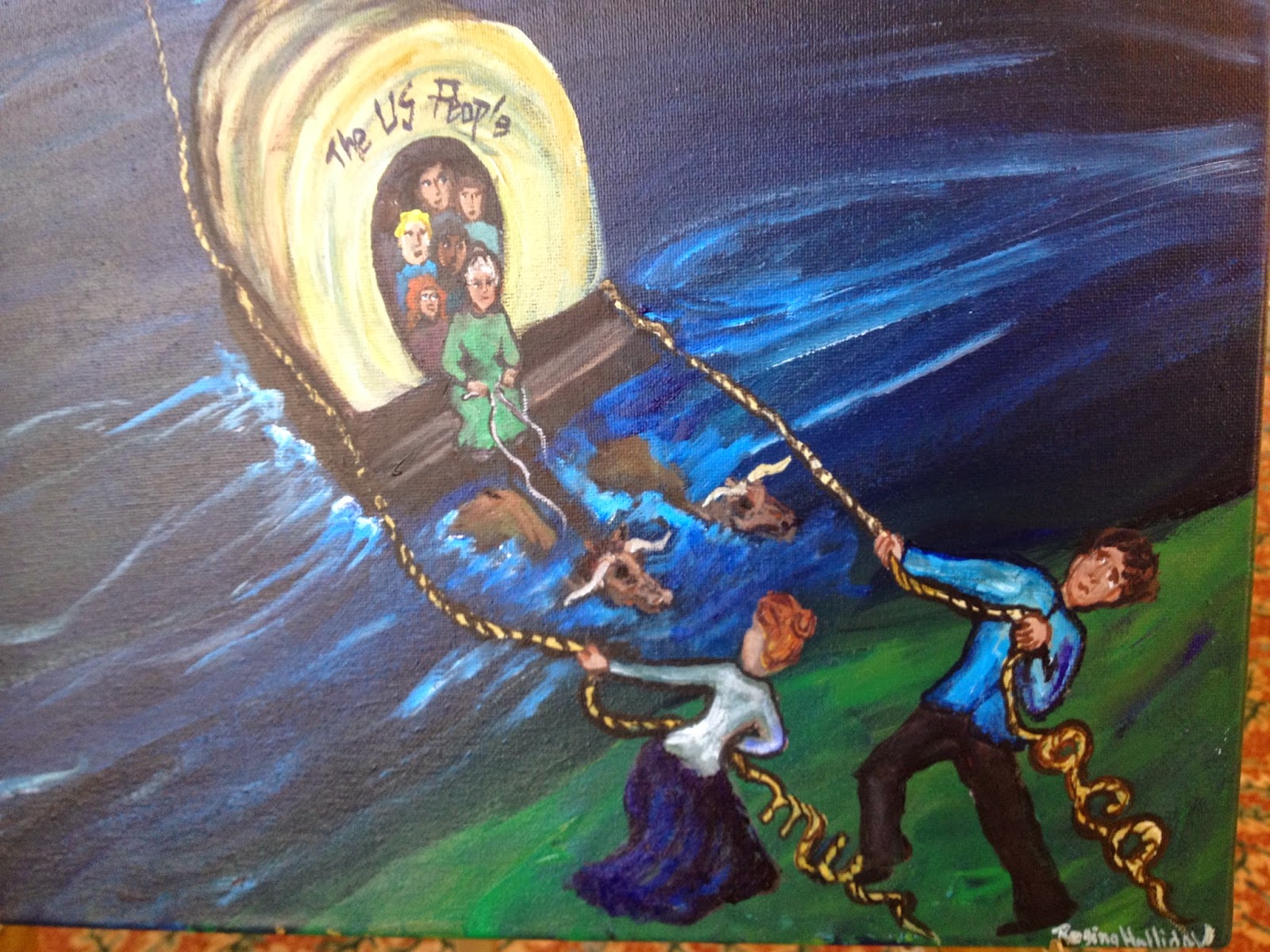 So today we would like to jointly announce the HIS-talking Gallery Patient Scholarship for travel to HIMSS 2015, April 12-16, in Chicago!

There will be five scholarships offered for $1,000.00 each provided by HIStalk.  Each winning attendee will also have  a HIMSS attendee badge.  The winners will write a post about why they want to attend HIMSS prior to the event. That post will be hosted on HIStalk.  They will be encouraged to use social media to report out during the event. They will also write a HIStalk post explaining their experience after the event. As the founder of The Walking Gallery, I will offer to paint a jacket for any patient winners who have not already joined The Walking Gallery. The HIS-talking Gallery patient scholarship winners will be walking talking patient thought ambassadors in the hallowed halls of HIT.  Also they will be able to sit in the comfortable space of the HIStalk booth on the exhibition floor whenever they want to rest and recuperate.

In addition, they will also get an official T-shirt!

If you would like to be considered for one of these scholarships, please email your request to (one of our newest members of the Walking Gallery): Lorre Wisham at Lorre@Histalk.com.  Your email needs to explain why you should be funded to attend HIMSS and please include your facebook link or Twitter handle. (International patients are welcome to apply but they must be fluent in English and the scholarship amount is a flat $1000.00 regardless of travel distance.)

How is it judged?

The HIStalk team will judge requests based on writing merit and I will be looking at the patient story aspects.

When is it due?

All requests to attend must be turned in to Lorre by Feb 9, 2015.  We will announce the winners within one week on HIStalk.com.  Checks will be issued before the event so winners can book their airfare with these funds.

Why are we doing this?

I see this scholarship as a wonderful next step in greater inclusion of patients within the HIMSS conference.  I thank Tim and the entire team at HIStalk for their willingness to support patient participation in such a meaningful way.

Email ThisBlogThis!Share to TwitterShare to FacebookShare to Pinterest
Labels: HIMSS 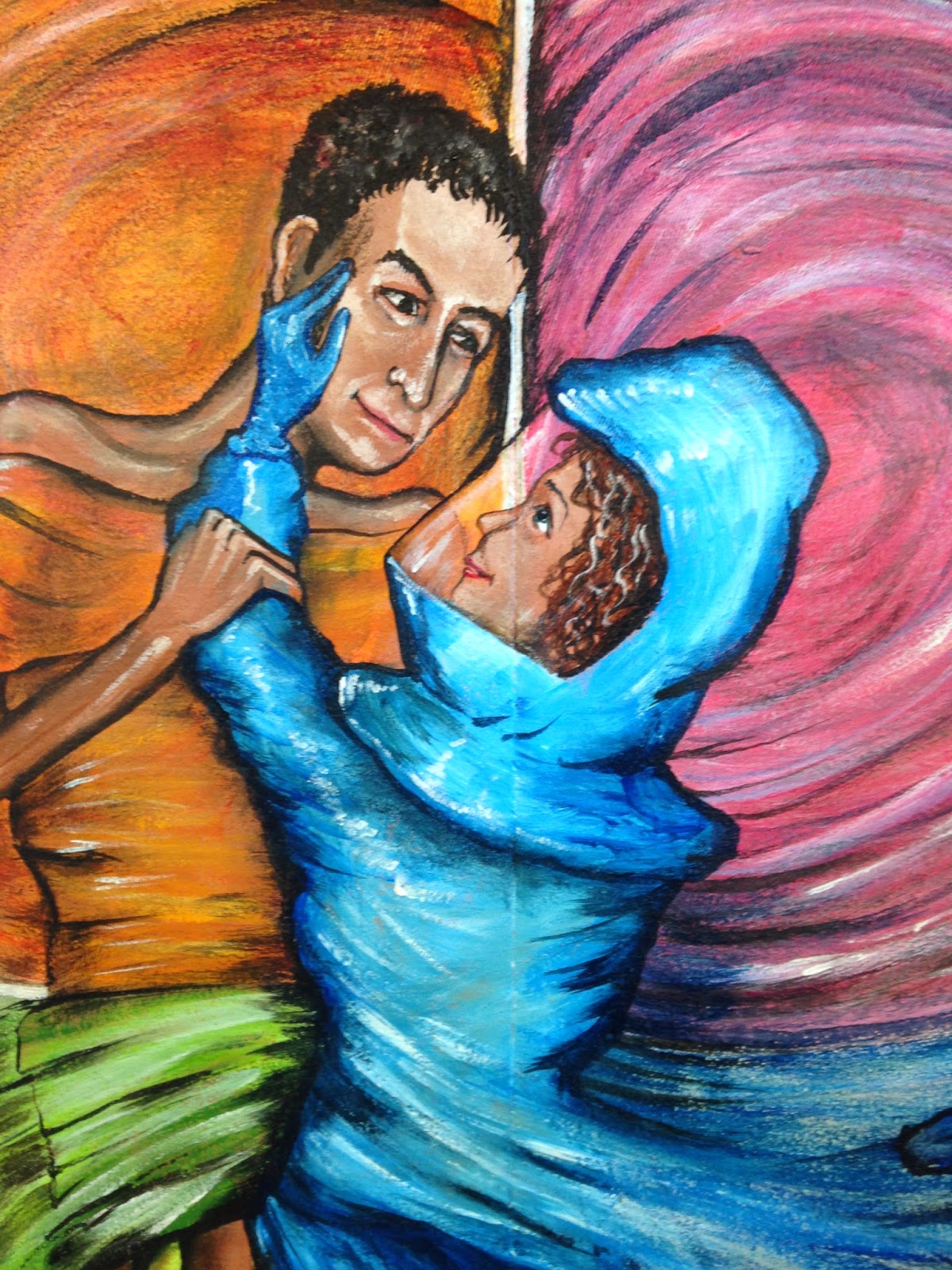 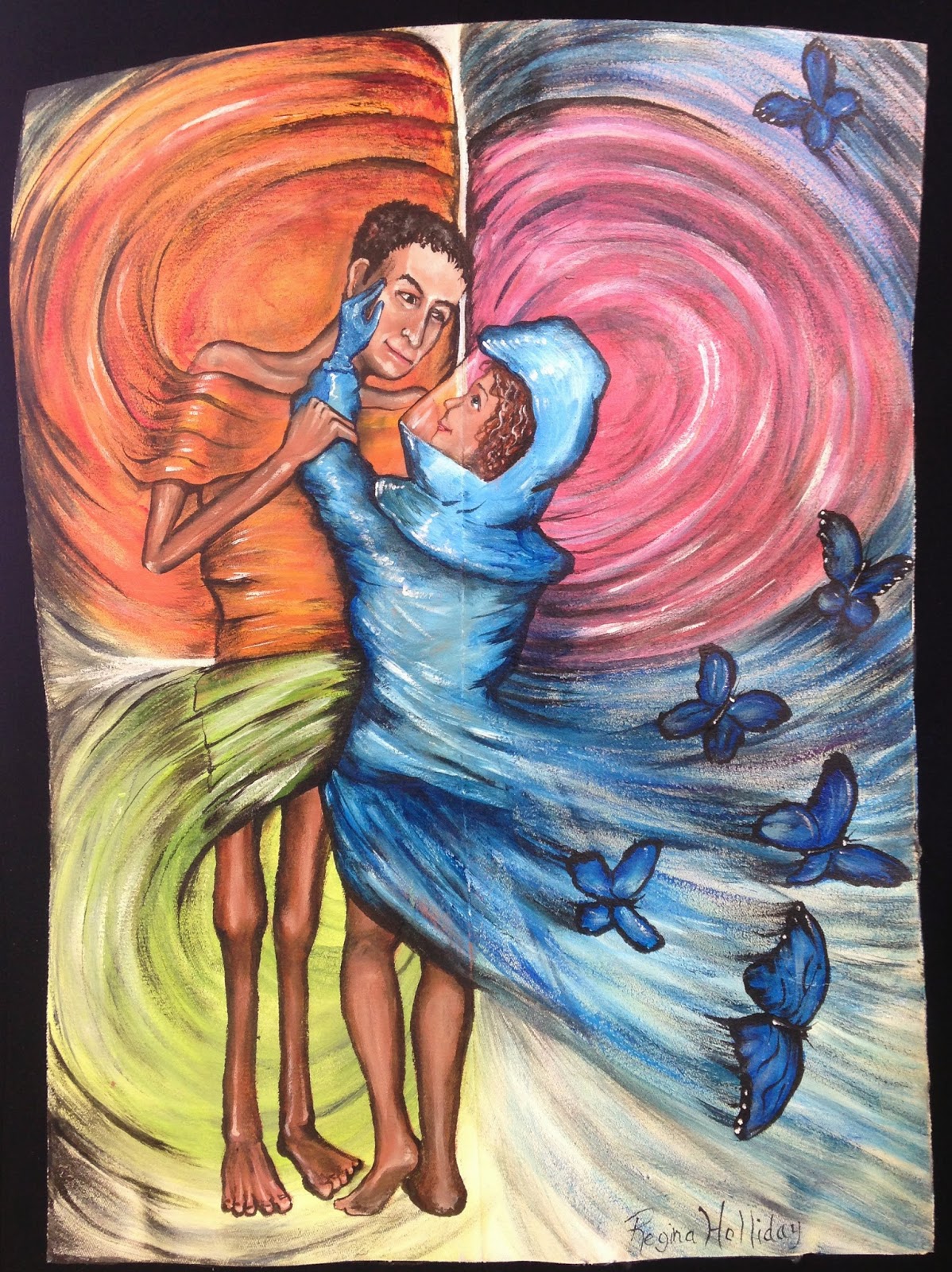 She found me.  She found another who lost their love to a dreaded disease in 2009.   She found someone who could paint her metamorphosis, someone who knew the beautiful pain.  We feel the wings of change as the flutter by.  We know the power of the last exhale.  We know breath can change the tide of years, we know the power of butterflies.
Posted by Regina Holliday at 1:29 PM 1 comment: