The Legacy of a Free Lunch

In September of 2012, I attended an IT summit in California.  It was a large event and I enjoyed painting the content of many of those who spoke about HIT (Health Information Technology.)  On the second day, a speaker began to jokingly to disparage hot lunch at elementary school.  The audience began to titter in agreement and the speaker concluded with a sarcastic rhetorical question, “Who would ever eat school lunch?”

I looked up from my painting and quietly and said, “I would.”  A couple hours later I was able to get on stage and explain the paintings I had created.  Then I asked how many of those in this room had been a free lunch child.  There was an uncomfortable shifting in the seats as very few people raised their hands.  I told them I was a free lunch child and I would never turn down the nourishment that sustained me nor make fun of such a needed service.

In policy circles, we talk a great deal about a digital divide within HIT, but we often ignore the economic divide.  I have attended many a meeting in the halls of power where the attendees are intelligent and hardworking, but they are not economically diverse. I am glad I can speak in these rooms about the power of the patient and the legacy of a free lunch.

I found out recently there is another free lunch student speaking out in DC who has dedicated her life to service.  She too grew up in poverty.  Her name is Karen DeSalvo, M.D., M.P.H., M.Sc. and she is the National Coordinator of Health Information Technology for the US Department ofHealth and Human Services.

She has joined The Walking Gallery and this is her jacket story “The Legacy of a Free Lunch.” 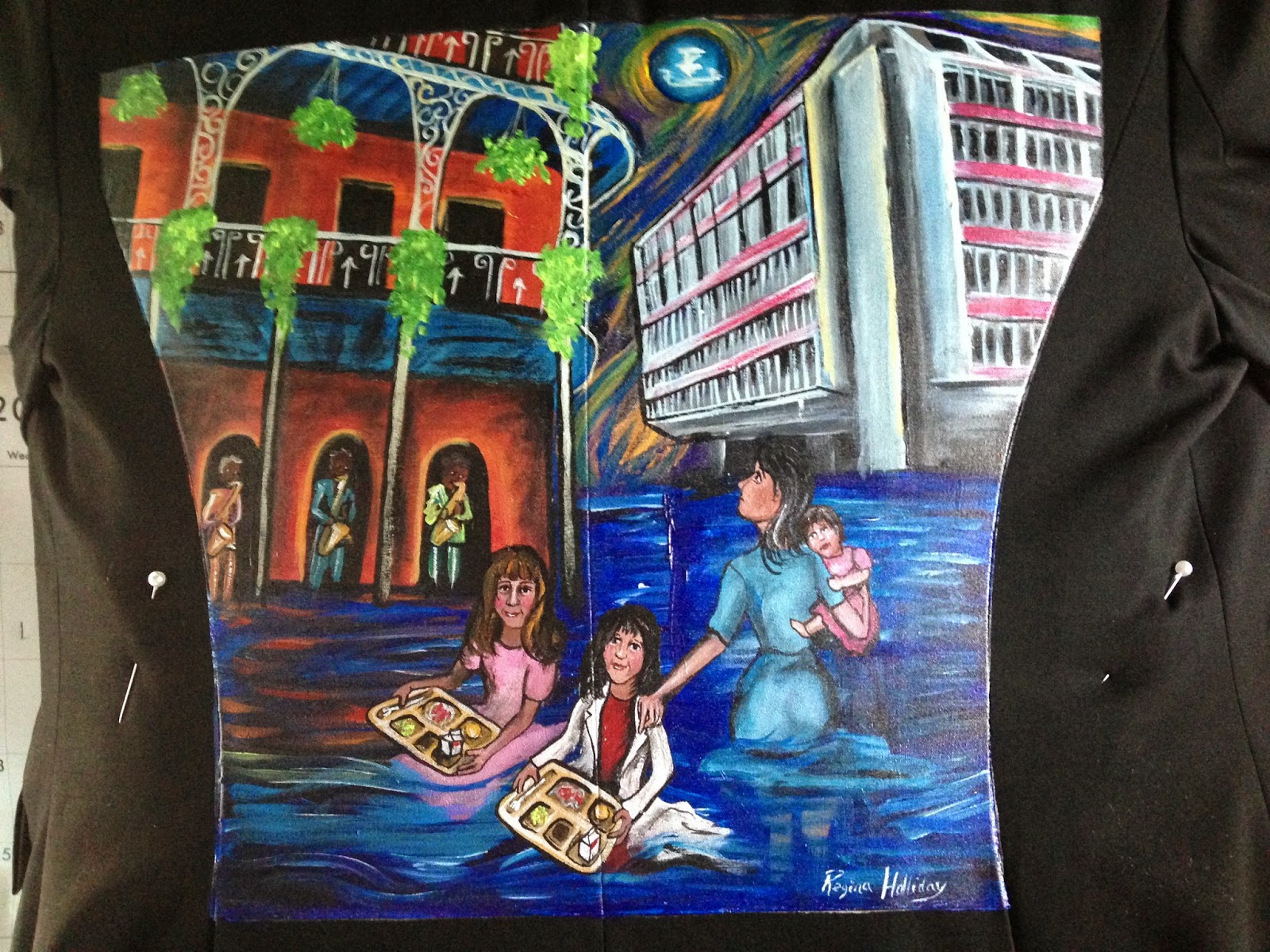 Karen had a challenging childhood.  Her parents were fromNew Orleans but had trouble finding work.  The family eventually relocated to Austin, Texas. At five years of age Karen’s father walked out on her Mother and his three daughters.  Karen’s young mother did not have a college degree and struggled to find work.  Karen and her sisters thrived because of safety net services that were available in Austin.  She ate free lunch and attended the local summer recreation programs for the poor. She also watched her mother struggle to work and maintain a family while suffering from depression.  No matter how bad it got Karen’s mother always managed to care for her children.

Karen decided early on she wanted to be a doctor.  She went to college and studied hard. She succeeded in her dreams.  She returned to New Orleans for medical school and stayed to practice.  She discovered health care was more than just the patient in front of you; access to care was so important.  When Hurricane Katrina Hit in 2005 she was on faculty at Tulane University and was practicing at a charity hospital. Karen was medical centric until Katrina dispersed the community and shut down all support.

The anchors of care were gone.

Karen DeSalvo, as Vice Dean of Community Affairs and Health Policy for Tulane University, was asked to help with the rebuilding process. New Orleans had a clean slate to rebuild the entire system. What if the new system looked very different?  What if access to care was in neighborhoods? What if Health It was embraced? That would be better than keeping track the now water-logged scraps of paper with scribbles.  Karen and her team took opportunity from tragedy and worked out in the community. They must have free clinics first. These needed to be medical homes fully IT enabled.  Some of these clinics would be mobile and some would be brand new buildings, but all would be working together and created from scratch as part of the community.

Karen began to delve deeper into the safety net of the entire city.  She started asking many questions. Where do people live, work and play. How do you navigate the healthcare system? How can you choose to schedule time off for a mammogram, when that means missing a chance to see your child in prison? Where is your playground? Three blocks away can be another neighborhood in New Orleans.The University gave Karen free reign to rebuild in NewOrleans with medical homes, community health workers and seamless hand off for mental health.

By 2010 Karen was exhausted, but glad she had done so much to help her beloved city.  Karen was part of the search committee to find a new Health Commissioner for the City of New Orleans.  When the woman they chose decided not take the position.  Karen realized she should step up to the plate. Karen took a leave form Tulane University and became Health Commissioner in 2011 and served till 2013.

In January 2014, Karen was chosen to be the new National Coordinator of Health Information Technology for the Department of Health and Human Services.  So much her life has been focused on helping patients and now she does so through policy, but she still finds time to practice once a month at the clinic. It helps her to stay centered.

I painted young Karen standing waist deep in the waters of New Orleans.  I painted her loving family at her side and her free lunch clasped firmly in front of her.  I painted her with hope for a better tomorrow etched upon her face.

I painted her mother with a worried expression and her back half turned.  In 2005 Karen’s mother was slipping in to into the late stages of early onset dementia. Karen had been looking forward to a day she could care for her mother as her mother had cared for her.  Karen’s mother was the kind of person who loved people deeply and without condition.  As her disease progressed her memory was like a whiteboard filled with notes that someone was randomly erasing.  Karen watched as the nursing aids in the group home were disrespected even though they knew about the patients as people.  It opened Karen’s eyes.

In 2005 Katrina struck. Karen’s mother had to be evacuated to Texas to be near Karen’s two sisters.  Karen had to place her mother in a nursing home.  Nursing homes can be such sad bad places.  She lasted 8 months.

I painted the New Orleans that Karen loves upon her back, both the tragedy and the jazz.  I painted the Hubert H. Humphrey building that houses Health and Human Services.  I painted a blue moon that is also a Blue Button.

Karen lives in DC most of each month.  Her loving husband Jay and treasured pet dog Abita live in New Orleans.  She goes back and visits when she can.  When she is home she enjoys her time with her family and focuses on her loved ones entirely, but when she is in DC she focuses on the health of the nation.

She thinks about what she can do to make our system better after watching the waters rise, after watching her mother die, after helping those who are lost within a broken system.  She is the legacy of a free lunch and if I were member of the status quo I would be running scared. 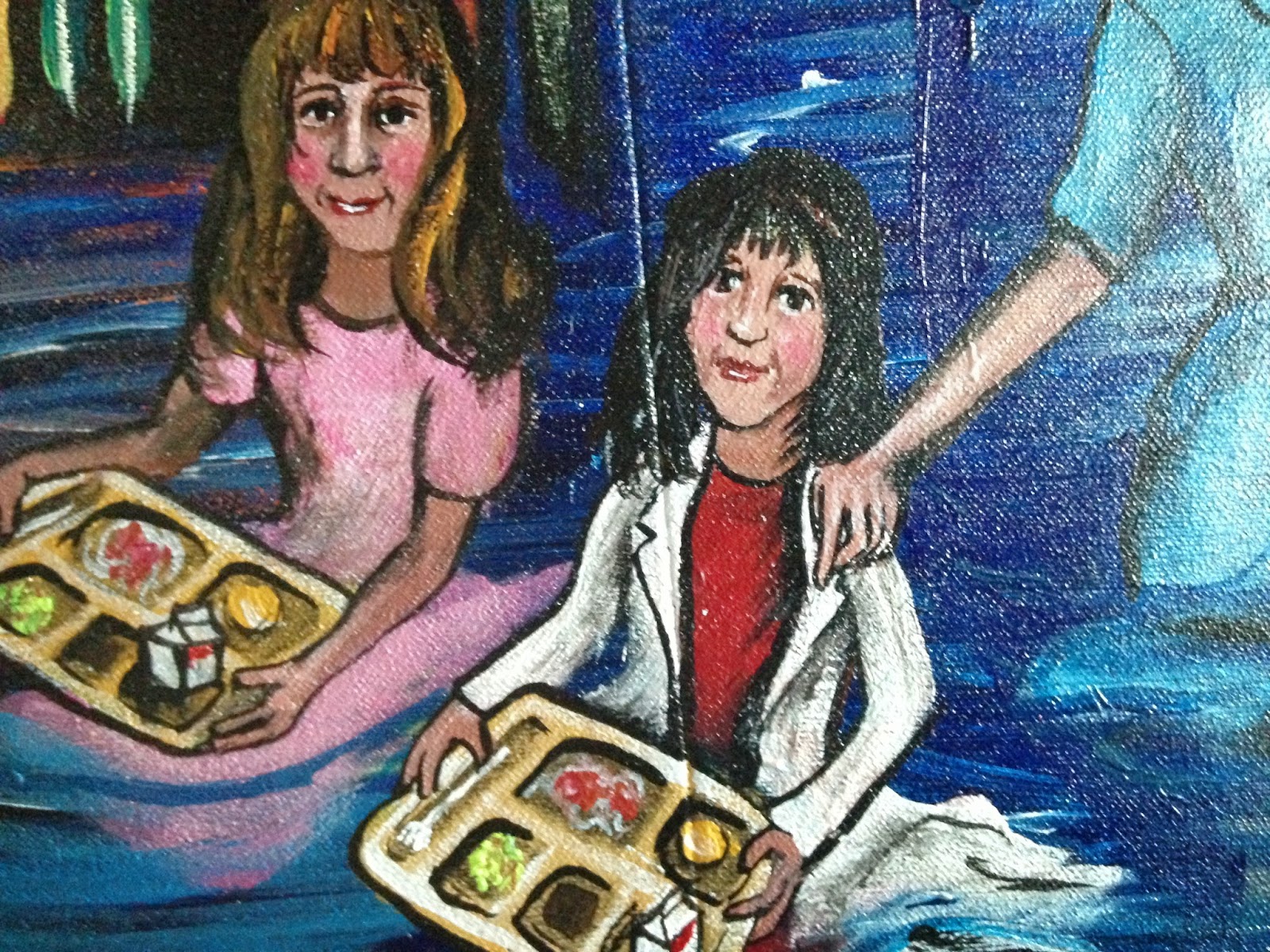 Karen DeSalvo has learned that in the darkest hour when things are irrevocably broken, you have a clean slate upon which to create a new and shining world. 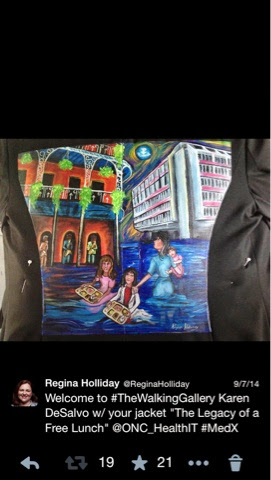 Posted by Regina Holliday at 6:32 AM 2 comments: