I flew to St. Louis, Missouri to attend the Medicaid Enterprise Systems Conference August 16-17, 2016.  Xerox Healthcare hosted me and I would be painting in their booth. When I arrived, I walked through the exhibition hall and saw all the usual give-a-way swag: Pens, water bottles, USB sticks, and candy.  I rolled my paint supplies into the Xerox booth and set up my easel next to the item Xerox was giving away.

It was a coloring book and colored pencils.

As I painted for two days with the Xerox team, I heard so many conferences attendees eagerly thank the team for bring coloring books.  The attendees said they would color on the flight home, in conference sessions, or color just to let go of stress. 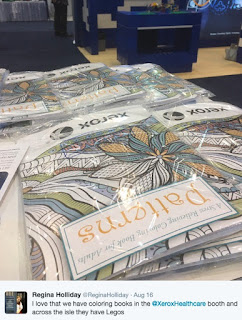 The coloring book was such a major part of the conversation that I added it into the painting: “Uniting the Kingdoms.” The upper part of the painting is black and white, waiting to be colored. 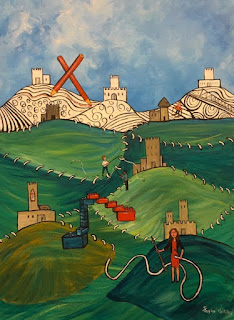 As I spoke with attendees, I heard many attendees talking about each state’s Medicaid program as though it was a little kingdom to itself.   So I painted the kingdoms being sewed together by the cables of technology.  I also created a bridge of Legos uniting two kingdoms and honoring a nearby booth that had Legos available for attendees.

On the second day we had a mini gathering of The Walking Gallery, as three Xerox staff members had recently joined the movement.  To the left is Allyson Burroughs telling the patient stories of her father, grandmother and mother.  Then I wear my letter A for "Little Miss A type personality."  Next is Lauretta Sechrest telling the life story of her father who passed away recently.  Finally, to the far right is Tiffani Doyle who tells the story of her sister-in-law and her first born son. 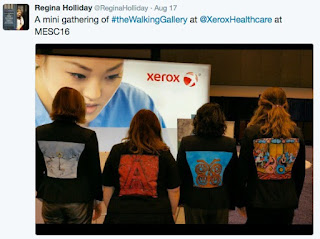 The second day I painted “Leverage.” 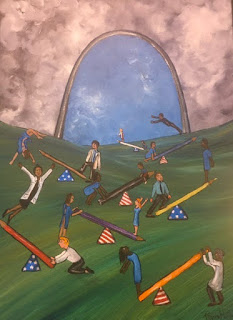 In this painting, I depicted levers and fulcrums.  Each fulcrum was a piece of the United States flag and it represented the legislation upon which we build our healthcare framework.  A patient, vender, or provider was working each lever.  Each lever propelled into the air a patient, vender, or provider toward population health.  In the center background of the painting was an arch.  Blue sky was in the center and gray sky was swirling all around the arch.  This is the future of healthcare.  It could be gray swirling storm clouds or beautiful blue.

I hope we color it blue.
Posted by Regina Holliday at 4:01 AM