Social Media on the Titanic: RT @Titanic #ICE BURG ahead :( 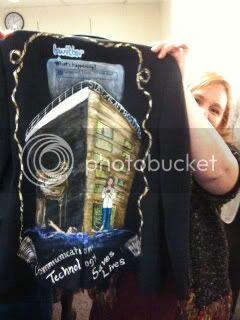 Ruth: Will the lifeboats be seated according to class? I hope they aren't too crowded.
Rose: Oh mother, shut up! Don't you understand? The water is freezing and there aren't enough boats. Not enough by half. Half the people on this ship are going to die.
Cal Hockley: Not the better half.
I have been thinking a lot about Titanic these past months. Fred and I loved that film. We saw it three or four times in the theatre. It had everything: art, tragic love, action adventure and amazing special effects. As I worked on the Mural "73 Cents" in August, I thought of Titanic. I was often asked, "Why do we need to fix our health care system when it is the best in the world?" This statement reminded me of Titanic. It was the biggest and best of its time. It was the unsinkable ship. It was was grand and out-fitted with the best that money could buy. Amongst all the fine things on the Titanic, one of the most important things was unfortunately ignored: the wireless telegraph.
Charles R. Pellegrino, who writes as an authority in such diverse topics as entomology, forensic physics, paleogenetics, preliminary design of advanced rocket systems, astrobiology, and marine archaeology, wrote quite a bit on the topic of Titanic. I was intrigued by his depiction of the wireless operators. There were Macaroni operators on Titanic. They were paid to send message to and from the mainland for the well-to-do aboard the Titanic. On Sunday, 14 April 1912 while working on and endless stream of personal messages the Titanic operators were hailed by the wireless operator of the Californian at 23:00 hours. He was trying to warn them of ice floes in the water. Now wireless telegraph was a lot like Twitter: Only 140 characters & broad spectrum communication There were a lot of messages coming in and the Titanic operators were sending messages @Cape Race. This tweet from the Californian @Titanic was really messing with the Tweet meme. So to paraphrase in our modern idiom the Titanic operators tweeted: @Californian Shut up, Shut up, I’m working @Cape Race. So the operator on the Californian soon turned off his wireless and went to bed. In about 10 minutes Titanic struck an ice burg. The Californian was only 4-5 miles away; but without the wireless communication they had no idea that Titanic was sinking. The Titanic wireless operators sent out the QED 35 minutes later and the closest wireless communicating ship was the Carpathia -58 miles away.
My point, you wonder? The massive Hubris of the Titanic was not what killed 1,517 passengers. The real problem was not realizing the importance of the communication technology available at the time. The entire catastrophe could have been avoided, if the wireless operators had sent the ice floe message to the bridge. In all fairness, the real-time wireless connection did end up saving 706 mostly first-class passengers who made it onto the life boats. Ironically, these same passengers had sent all those personal messages that had filled the wireless spectrum. I talk to a lot of people who think Twitter is for mindless chatter, and it can be used for that; but talk to the folks who used it in Iran during the election protests and they will disagree. I speak to people who don't think we need a fully accessible and transferable EMR, and I then think of the nursing home residents who needlessly died after hurricane Katrina for the want of EMR/PHR access.
In closing, I wanted to let you know there is a new hospital to visit in Western Maryland. According to their web page: "The new Western Maryland Regional Medical Center has officially opened our doors to begin providing tri-state area residents with comprehensive health care services in one centralized location on Willowbrook Road in Cumberland. This state-of-the-art facility rises seven stories into the sky, has 275 beds, and covers 585,000 square feet of interior space.
Years in the planning, the new Medical Center was designed with patients in mind. Bright, spacious rooms have plenty of space for family and visitors. Nursing workstations are located just outside patient rooms so nurse can be close by. Free valet parking on weekdays and plenty of additional parking in our 955-space parking garage."
http://www.wmhs.com/index.php?option=com_content&view=article&id=174&Itemid=199
Their site does specify that this State of the Art facility has WIFI, but when I called to ask them about whether this was an EMR hospital. The customer service rep had no idea, nor did medical records personnel. A nurse on the floor finally told me they use mixed paper records and computers. I asked about patient access to their data. I was referred back to medical records, where I was told that for 73 cents a page I could get a copy of my medical records....
@Western Maryland Regional Medical Center #ICE BURG ahead.....

Posted by Regina Holliday at 1:25 PM