Watching THE DAILY SHOW while Dying 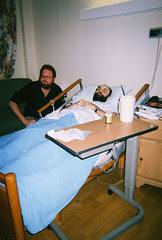 Jeff and Fred in Hospice
Originally uploaded by Regina Holliday

When I young, I was a very good student at Sapulpa High School, but I was twice sent to the principal’s office. I was sent once for health and once for comedy.

I was a journalist for the high school newspaper and was looking for a story. The student body had recently completed a survey wellness check. I found out the school office had a copy of the results. I wrote an article reporting the findings. The statistics I mentioned included drug use, alcohol use and sexual promiscuity within the school. After turning in my story, I received a summons from the principal. The school paper would not print my story. I wondered aloud if I had made a mistake in my fact checking. The answer was no--they just did not want me to expose the results of the wellness check.

Later in the year, I wrote and directed the senior assembly, including the skits. I was called to the office yet again, as some of the skits contained a comedic analysis of the school that was a bit too scathing. I was ordered to revise the skits and make them “nice.” I to some extent complied, although a little of the original biting humor remained. I was tired of being called to the principal’s office. I thought it was rather ironic that it was called the principal's office, as I found my principles tended to get trampled there.

I had found that using humor and art I could often make a point that would never be allowed in the more mainstream press. I guess that is one of the reasons I spent over 10 years watching The Daily Show on Comedy Central. I liked the show, and Fred loved it.

If all clinical services were equal, would you decide which hospital to stay in based on whether or not they had Comedy Central? Fred would have. He stayed at five hospitals during his eleven weeks of care, and only a few offered this on their basic cable menu. Fred loved the program The Daily Show with Jon Stewart and its spin-off The Colbert Report.

Fred and I started watching this as our nightly news in 1996. Back then it was hosted by the very handsome and blond Craig Kilborn. I thought his very visage was in itself a joke about whom we choose as an anchorperson in this country. He was a very pretty talking head spouting humorous nonsense.

In January of 1999, Jon Stewart took over at the helm. Fred already loved Jon Stewart’s comedy work and was very impressed by this new shift in leadership. I was not an instant fan. The show seemed to get a bit more serious and the humor had more of a bite to it. This was now a thinking man’s farce and Fred would often use the Internet to do further research as stories on the show piqued his interest. We watched The Daily Show together for years and in 2005 began watching the spin-off show as one half of “Even Stevphen.” Stephen Colbert created The Colbert Report.

In time, I was won over by the program and began appreciating the biting satire that both shows used to lampoon political parties, world leaders, and the hapless celebrity. But I was most impressed by Jon Stewart’s autism benefit of 2008; as he asked for donations from the audience so few people raised their hands. You could see outrage on his face as he pledged to donate in front of a crowd who had far much more money but less heart. That day I began to love Jon Stewart, because it is all a joke…. until it is not.

In March 2009, Fred was hospitalized. There were many problems with communication at our first hospital, but at least they had Comedy Central available on their cable menu. When we transferred with an out of date and incomplete medical record to a new hospital. Fred was saddened to see that there was no Daily Show to help ease his pain. But at least this hospital had WIFI, so I was able to upgrade our old laptop so Fred could see past shows via the Internet and surf the web. As I have said before, there are many ways of relieving pain.

A few weeks later, Fred was transferred to rehab. At this facility there was no Comedy Central and no WIFI. After spending a few weeks suffering incredible pain in the rehab facility, the decision was made to enter hospice. Fred was crashing. Upon entering hospice, Fred was not eating, drinking, or talking. In 24 hours he rallied under the good care of the hospice team. He was able to talk with friends and family and watch The Daily Show again. A few weeks later Fred came home for hospice care. It was a very hard time. I was trying to balance caring for my husband with caring for the kids, while Fred’s mother helped as best as she could. It was very hard, but each night we would hold hands and watch The Daily Show.

Here we come back to the title of this post. In the early morning of June 17th, around 1:00 am Fred could not sleep. He was having such trouble breathing. I turned on the TV, and holding hands, we watched the late night repeat of The Daily Show and The Colbert Report. I don’t really know what they spoke about. I was listening to each breath Fred took and trying to ease his pain. I don’t know if it was funny. But I know Fred was happy to see a show he loved and hold his wife’s hand as he lay dying. Fred said his last words at around 6:00am, and by late morning he died.

When Fred had less than twelve hours to live, he spent one hour watching Jon Stewart and Stephen Colbert.

So this weekend, I will be attending Jon Stewart’s Rally to Restore Sanity/ Stephen Colbert’s March to Keep Fear Alive. In a way, I am sure Fred will be with me. It is being billed as the Million Moderate March. This is where all the regular people who do not attend marches can be counted. I will be there as the wife and mother and fan of the show. I will also attend as the activist I have become. Because sometimes things seem like a joke until they are not.

In researching this post, I called all of the hospitals that Fred stayed into verify whether or not they currently offered Comedy Central. I first checked every website to see if anything was listed in their patient amenities. Not one site offered a listing of Cable viewing channels. Each hospital seemed taken aback by my question, one hospital employee even laughed at me. No one knew the answer. In one hospital they transferred me to maintenance, after a pause of a few seconds the Supervisor of Housekeeping said, “Yes, we do have Comedy Central.”

I am glad. I am sure there is another Fred out there who laughing with The Daily Show as the morphine pump provides its gentle comfort. I wonder though, which pain relief is impacting the patient more?
Posted by Regina Holliday at 11:32 AM