It's only an egg.

I have followed Gregg Masters as @2Healthguru on twitter since the summer of 2010.  He has such a clear and powerful voice in our health care social media world.  In his photo avatar his long white hair gives him the look of an elder or sage.  In June of 2011, I saw Greg in real life.  We were both participating in health innovation week DC and in meeting after meeting Gregg had amazing things to say.   His unique voice was even more powerful in person.  His hair white was shorn close and his every movement displayed vitality and vigor.

We stood in an archway of a crowded room and discussed our lives.  We were both single parents working in health care.  We could completely empathize with each other’s plight of spending time away from our children, in order to travel and do our life mission.  Gregg’s babes have long since grown, but he had walked this path before me and understood.  As I talked with Gregg, I felt the serenity of his presence and it seemed as though he was filled with a powerful and soulful energy.  When I looked at Gregg, he sparkled.  So, that is how I painted him.
This is “It’s only an egg,” Gregg Masters jacket. 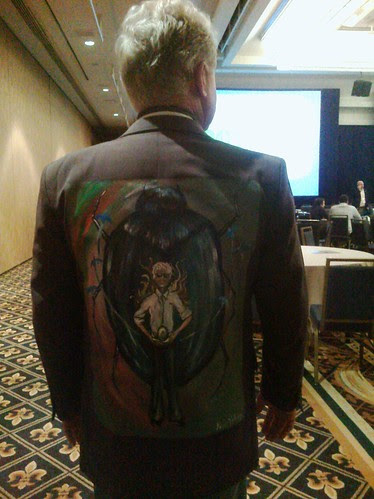 The background of the piece is a rainbow of contrasting colors swirling together in a vortex.  Upon these writhing streams of color a scarab beetle slowly walks.  Here the beetle represents the journey Gregg takes.  It represents the concept of hope and rebirth.  It represents the years of hard work, rolling the dung-ball uphill, to reach a point of personal fulfillment and professional success.
In front of the scarab beetle Greg Stands.  He smiles he his little half-smile as if sharing an in-joke with God.  His sunglasses cover his eyes without distancing his soul, and an inner fire rises from his shoulders. 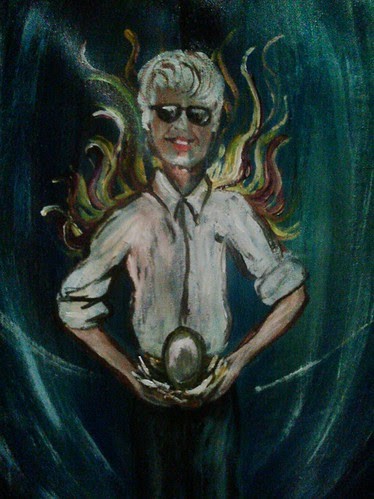 In Greg’s hand he holds a nest and an egg within.    A series of Twitter birds fly away from the egg, as though scouting food, delivering messages or preparing the world for a new birth.
This jacket is the story of our movement of participatory medicine.  Gregg’s voice is a voice that refuses to be silent, refuses to give up.  In the daily grind of institutional medicine, there are many who say, “That is just the way it is.”  “Nothing will ever change.”  But Gregg cries out, Gregg questions.  Gregg pecks at the interior of the shell and spreads fissures and cracks in the old way of doing business. 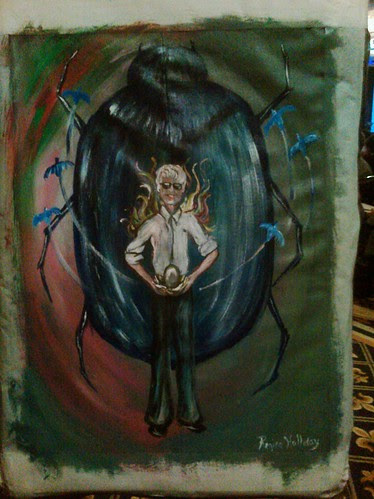 He may look harmless, he may look saintly, and he may seem to be only an egg.  But Gregg will break forth, and with many other disruptive ones, Gregg will fly.
Posted by Regina Holliday at 6:00 AM