“Truth is Truth to the End of Reckoning

I do math homework with my son and we labor through problem after problem.  We work through all the steps until he finishes and then I make him check the answers.  It takes more time, but all the effort was for naught if we do not check the answers.
I think medicine in the US, as it relates to autopsies, could learn a thing or two from my son’s math homework.  In the last 20 years people did not stop dying, but we stopped checking on the reason why.
In 1970 the Joint Commission dropped a requirement that hospitals perform autopsies in 20% of cases in order to maintain accreditation.   Since then autopsy rates have plummeted. In the United States hospital autopsy rates of 60% in the 1950s fell to 12% in the early 1990s and less than 5% in nonteaching hospitals.
The current rate of autopsies is at 2%.
There are several reasons for that.  Many hospitals have stopped offering autopsies altogether, the majority autopsies now conducted consist of state funded examinations due to probable wrongful death.
Private autopsy services are available but are mostly cost prohibitive. Going rates for autopsies range from $3,200 -10,000 dollars.  For complex investigation that involves multiple board certified doctors and investigators the price can quickly jump to $ 50,000.00 which is an impossible price for most families.  Even the bargain basement $2,000.00 autopsies and are far out of reach of many consumers.  Sadly, the most affordable autopsies are conducted by the least qualified.  Autopsies are done throughout our nation by gynecologists, internists, veterinarians and chiropractors.
Insurance does not cover autopsy in most cases. Death is a universal phenomenon yet it is not included as a step in our final process of care.  The average family now pays from $6,500 to 7,200 for funerary expenses.  Years ago the cremation rate was only 22% now it is at 54% as consumers must decide how to spend their money.  For this post I interviewed a funeral director that said in virtually every case where the family enquired about autopsy they quickly gave up when they realized the high cost.
And the cost we are paying for a lack of access to affordable autopsy has an even higher price to our society.  Studies find that there is disagreement between pre and post-mortem diagnoses in almost 30% of cases. Think about that. As we delve ever deeper into the concept of evidence-based medicine we must reinstate a statistically significant autopsy rate.
When my late husband Fred was sick, I enquired at hospice about an autopsy.  Fred had a bone biopsy but the sample was too small to determine which type of kidney cancer he had.  I wanted to know so I called 1-800-Autopsy as was recommended by hospice.  They did not return my call.  After asking around I found out the price would be in the thousands, far more than we could pay with a funeral looming ahead.
I gave up.
Today I spoke to on the phone to Vidal Herrera, the man behind 1-800-autopsy. He explained that the franchise of the company my call went to was most likely the Florida branch that folded around the time of my call.  Vidal is a kind man who has been trying to provide forensic care for people for the last 40 years.
After a back injury in 1984 for that ended his career in the county coroner’s office, he created a company to perform private autopsies.  There is a desperate need for trained pathologists in this nation.  Men trained like Vidal are a vanishing. A pathologist resident used to be required to perform 100 autopsies, currently it is 50.  And “perform” is rather loose term as most of the autopsies are rotations in wrongful death cases, where the student is not allowed to touch the body but still receives credit.  So we are facing a shortage of trained individuals.  In the current system, funeral directors are expected to do due diligence on the names they recommend for performing autopsy, while have no monetary incentive to do so.
On top of that we must deal with the sorrows and concerns of the grieving family. Since 911 1-800-Autopsy no longer flies to the body, the body must be shipped as cargo to the lab from locations across the country.  Families worried about a quick resolution and a funeral will often fold when confronted with this additional burden.
But this blog is about medicine and art.
All of this research on autopsy had me thinking about Leonardo da Vinci.  Many consider him the greatest artist of all time, but I wonder if he would have been as great without the 30 plus human dissections he completed within his lifetime.
Vidal is an artist too he created this poster, but his preferred media is more in line with his profession. 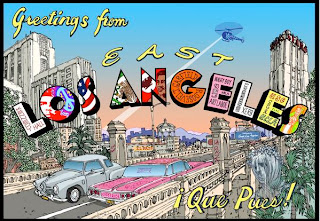 For a number of years he was providing props for pathology in films and television.  Then he was asked to make a coffin couch.  He thought the request was a joke at first, but then he found that the person was sincere.  He created a team of artisans and they went to work and created the coffin couch.  Not long after he began showing the resulting artistic furniture in Los Angeles art walks and fairs.  Many people were impressed and said they would love to view his studio.  He responded, “I don’t have a studio, I have a lab.”
Vidal is hopeful that he will be able to fund scholarships to help future funeral directors with the funds raised by coffin couches.  I was very happy with symbolism inherent in his art that brings death back into the “living room.”  Once upon a time death was part of life, and not banished from the home or the halls of medicine.

Vidal is trying to help us appreciate the great knowledge death can impart if we embrace the journey.
Vidal also mentioned that he was asked to speak for the first time this summer at the annual funeral directors conference.  He had not been asked as the man who has tried to keep autopsy available for private citizens. He was invited as an artist who makes art out of death.
I could relate, sometimes to be heard you must try communicating in a new media.
Posted by Regina Holliday at 6:33 PM