A Birthday and Hornet Day 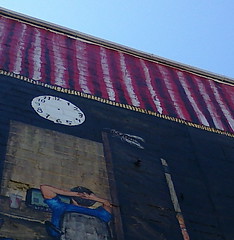 The hornet in 73 Cents
Originally uploaded by Regina Holliday
I have been blessed with a birthday that sometimes falls on Mother's Day. Fred and I joked that he didn't have to buy me many presents as our anniversary was the day after Christmas and my birthday was often on Mother's day.

Last year my birthday was on Mother's Day and Sundays were the days we took the boys to see Fred. We could celebrate both right in Fred's room at the Rehab center. I cut him a piece of cake and we all got in my Mother-in-law's car for the drive to Shady Grove.

When we got there, Fred's eyes were focused on the ceiling. There was a hornet in the room. We had already been dealing with ants coming in through the window and now it was wasps. I went down to the nurses station to complain. They said they would send a janitor. We waited 45 minutes and no one came. The cleaning staff had left for the day. I tried to get it myself a few times, but I was so short I could not reach it.

I went back to the nurses station and asked for help. The nursing supervisor came. She stood on a chair and tried a few sweeps with a newspaper. She only succeeded in making it mad. She then got off the chair and told me she couldn't get it and needed to go back to the nurses station. She left and my family looked at me. My husband looked at me in resigned defeat. My two little boys looked at me with the fear little ones reserve for flying stinging things. My mother-in-law just stared.

I picked up a Newsweek Magazine with the Starship Enterprise on the cover and began to climb. I climbed on chairs and bedside tables swatting at that wasp. I chased it around the room. How dare it invade our fragile peace. How dare it worry my husband who was lying in a bed he could not arise from. How dare it scare my children who would only see their father for a few hours tonight. I climbed and swatted. Finally, climbing across the guest bed, I hit it. It fluttered its last and fell to the floor.

My oldest son Freddie let out a whoop. Three year old Isaac laughed a joyful giggle. I spun around with them in the center of the room as we did a happy dance. Fred looked on with a smile. We had killed the wasp. We could do this one thing to make this horrible time a little better. After our giggles subsided, we stayed a few hours and talked. Fred never ate his piece of cake. It was nine days before he went to hospice and he did not feel much like eating.

Months later, I showed friends the design sketch for "73 cents." They asked about the hornet. They liked the picture, but the hornet did not make any sense. They recommended I leave it out of the final painting.

I told my son Freddie about their recommendation that I remove the hornet. He was immediately upset. "NO, Mommy, NO! You could leave out everything else, but never the hornet." He looked at me with those striking blue eyes brimming with tears and said, "That was the special day. The day you killed the hornet. The day you showed me everything would be alright. Isn't that what the picture is all about? When you see something is wrong, you do something to change it."

Today, I went over to the painting and I stared at the space above he door. There is a Hornet in the picture. Freddie was right. You could leave out anything else. The hornet meant everything.
Posted by Regina Holliday at 1:11 PM