Art and Contracting and being an E-patient 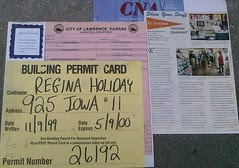 Art and Contracting
Originally uploaded by Regina Holliday
When I was child I lived on a sleepy block on Elm Street in Sapulpa, Oklahoma. My father was a junk man who ran a flea-market stall to earn some cash and my mother worked as a hospital housekeeper. I remember endless days of sorting through piles of junk in the back yard. The sun beat down upon us as my sister, brother and I would sort nails into jars. We go through piles of shoes trying to match pairs. Would sift organic compost and fill bags of this ‘black-gold’ for selling in his flea-market stall. My father was a hard man to live with, but even he could see we would work more productively in the shade, so he began to build a shed.

We lived next to a Church. Parishioners were always asking us to get rid of the junk in our yard and every couple of years a committee would come over asking to buy our house so they could raze the property and expand. Every time they were told no. We planted creeping vines, morning glories and honey-suckle all along our five-foot high fence. But they could still see our junk sometimes, and they could see our shed. Someone from the town came one day and told us there had been a complaint. Had we built a shed without a permit? Dad said he didn’t know he needed a permit to build a shed. Well, ignorance of the law was no excuse. We had to tear down the shed. My Dad was angry. And like the Incredible Hulk character I saw on TV, You would not like to see him angry.

Dad decided to make a statement. He took the wood and scraps from the shed and combining it with even more junk built a modern art installation. It was a cart to Calvary made of trash wood and metal and topped with a large cross and he parked in our front lawn in plain view of the Church. It made the front cover of the Sapulpa Herald. The neighbors couldn’t do a thing about it, as there was no zoning code that forbade junk-art installations. My father had made his point, and my siblings and I went back to sort junk in the simmering sunlight of our backyard.

Many years later, I had the opportunity to help open an art store as a satellite location of The Jayhawk Bookstore in Lawrence, Kansas. I remembered the lessons learned in childhood. I would get the necessary permits. And because we had a tiny budget, I would act as the building contractor. I was the mother of a one year old at the time and was the store manager of the Jayhawk Bookstore, but working with my art dept. assistant Sean Barnes we handled the general contracting for the location. We were on location daily and sometimes nightly. We oversaw and worked with the plumbing sub-contractors and the electrical subcontractors. We finished on time and under budget. Afterwards, the electrical contractor said he had never seen his team work as fast as it had under our watchful eyes. We had learned very quickly that Sean or I needed to be on site to communicate goals and facilitate a speedy construction time-line. We did not know that much about fire-code regulations and ADA accessibility guidelines when we began, but we found out you can learn about anything fairly quickly if you are determined and a have a deadline.

I also had to work within the signage ordinances for business in Lawrence, Kansas. Even Wal-Mart wasn’t allowed its customary large pylon sign in this town. How was I to make an interesting anchor location that sold art supplies with limited signage ability? Well, I could do a really large faux stain glass window painting coving a swath of windows three by fifty feet. This wasn’t additional signage: this was art. The non-traditional use of high windows and paint was covered in the July 2000 issue of CNA (Craft and Needlework Age: a periodical of the craft/art industry).

Yes, I had learned my lessons well.

This morning I woke up to find the Washington Post at my door and on the front page of the Metro section was a picture of mayoral candidate Vincent Gray standing behind a fence. You can read the full article at http://www.washingtonpost.com/wp-dyn/content/article/2010/05/23/AR2010052304072.html?hpid=newswell
The article explained that Mr. Gray has a fence on his property that was built without the proper building permit. Mr. Gray had assumed that his contractor Pete Schultz of Eastern Grounds Maintenance had obtained the required permits. This article had me thinking back to art installations, building permits and what it means to be an e-patient.

Sometimes, when you want a job done right, … you have to actually talk with the people on the team. And sometimes to get the attention you need you have to think outside the box.

It is easy to give up the reigns of our own health care and sub-contract responsibility to our doctors and nurses, but when the day is done it’s our body and our record. We have the ultimate oversight authority in our lives and it is really important that we do not give that up. There is a reason for informed consent. You should know what is being done to your body and decide if this is the right path for you. On the flip side Doctors and nurses need to consult with the patient before building any “fences.” I cannot imagine going to a permitting office and accepting a “verbal” copy of the permit. I want the hard copy, I want to read it and I want to post it.

I know building permits exist for a reason. Can they be used in petty ways to push personal agendas? Yes, but their ultimate goal is to protect our citizens. I love that Atul Gawande, in his book The CheckList Manifesto, compares medicine to the construction industry. He writes, “We add somewhere around seventy thousand new commercial buildings and one million new homes each year. But “building failure”- defined as a partial or full collapse of a functioning structure- is exceedingly rare.” Dr. Gawande continues in the Chapter: The End of The Master Builder to relate that when an error does occur it is the result of a failure to communicate.

I bet Mr. Gray is wishing he had checked on those permits. He has gone through a five-month headache about that fence and after paying for its construction he might have to remove it. What we have here is a failure to communicate. In this case, it could cost a mayoral candidate money and prestige. In the world of healthcare a failure to communicate can cost you your life.
Posted by Regina Holliday at 11:37 AM