"Apples to Apples" by Regina Holliday 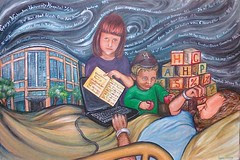 Apples to Apples by Regina Holliday
Originally uploaded by Regina Holliday
This is a painting of data. This is Apples to Apples. This is my take on what data can look like when presented in a visual form. I took patient satisfaction survey results and clinical care results from George Washington University Hospital and combined them with the allegorical image of a child’s report card.

In this painting the sky is a swirling storm cloud of information. It crosses the field of vision like the data on a computer screen. Scrolling left to right and falling off into a nether-land of statistical confusion. This data reflects clinical care. It shows whether or not the correct medicines were given in a timely fashion. It shows how long people live after a heart attack. It is the background and sets the scene for action.

In the mid-ground are four images. To the left is George Washington University Hospital looming in the stormy sky. To the far right is a tower of children’s alphabet blocks. These blocks spell "H C A H P S". This is the acronym for Hospital Consumer Assessment of Healthcare Providers and Systems. These are the building blocks that help patients make decisions about where they would like to be admitted if hospitalized. Sandwiched between the two structures are two children. The small boy holds out two apples. He would like to show you that you have a choice. You, the patient, can decide where to receive care. Due to HCAHPS, you can now compare hospitals based on patient survey satisfaction results. Next to the boy stands a girl. She is concerned as she shows her report card. The patient satisfaction data is now represented in a report card format. Comfortably average scores are now shocking when depicted by C’s, D’s and F’s. 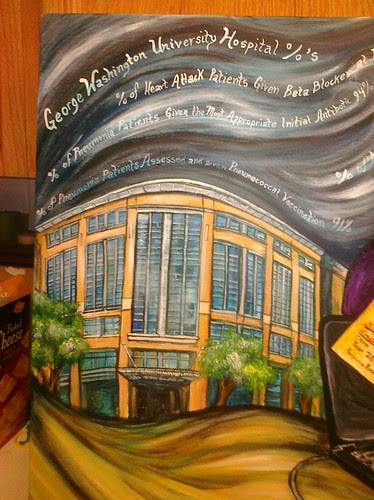 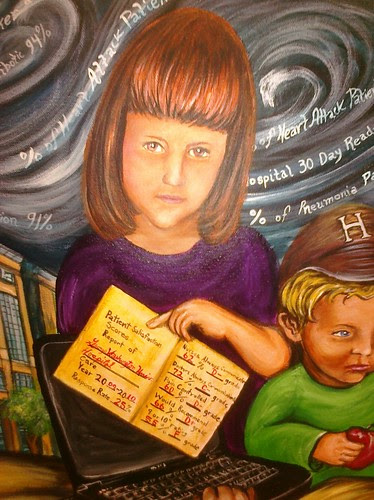 In the foreground lies our patient. He is trying to research. Hand upraised in frustration or confusion, he tries to comprehend the data before him. His attention is torn between the offer of choice and the presentation of data. 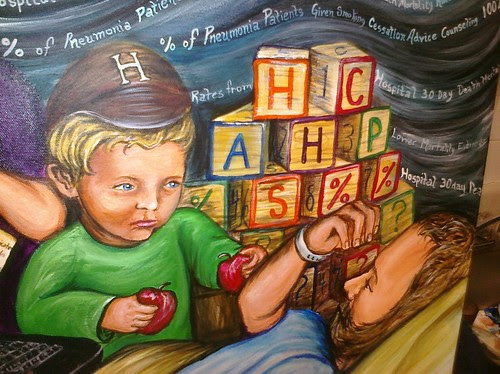 The image itself depicts the importance data access, but as an artist I wanted more. This painting was created en plein air at the site of the hospital it is depicting. I stood within the constant stream of passersby, as if I too, were now a data mote. Upon occasion people would stop and ask a question. I would infer-face with them for a moment before they would walk away. I existed only to bring them the data in a way any patient could understand.

That experience was captured on video by Tessa Moran and Ben Crosbie with music by Paul Hanna and can be viewed below or here.

Posted by Regina Holliday at 12:53 PM