Children Standing up for Healthcare Reform 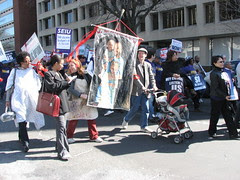 IMG_0407
Originally uploaded by ThroopCat
This past week a lot of people were standing up for healthcare reform. There were marchers in the streets of Washington, DC trying to get equal access to insurance. There were congressional hearings on the subject, and 24 healthcare survivors spoke of their healthcare tragedies. One of those wonderful people was Marcelas. He is 11 years old. His mother, Tifanny Owens, died due to lack of access to continuous care for her medical condition. Wednesday, March 10th was his birthday. Instead of celebrating this wonderful event at his home, he spent the day explaining why his mother died because of her lack of insurance coverage. He is a bright and articulate boy who spoke with great poise. He stood tall and explained to audiences that his mother would be still be alive today if she had coverage. Now he has been attacked by columnist Michelle Malkin in the DC Examiner and by Rush Limbaugh on the radio for his attempt to speak out against injustice. Ms. Malkin asserts that Marcelas is a "kiddie shield" for the Democrat's health care initiative. Mr. Limbaugh accuses Marcelas's grandmother of exploiting this family tragedy to further the interests of her employer, the Service Employees International Union.

Mr. Limbaugh and Ms. Malkin are making the statement that young Marcelas is unable to understand and act for himself. I say they are wrong. I remember being 11 and 10 and 9 years old, and I remember injustice. I remember what it feels like to be a child in an uninsured family.

I remember watching Little House on the Prairie. It was the episode where Mary needs to get glasses and is squinting at the chalkboard and pulling at her eyes. I turned to my mother and told her that was exactly what I was doing. I begged her to get my eyes checked. As an uninsured family we had no yearly check-ups to determine if our eyesight was failing. We couldn't get the appointment until our tax refund came later that year . I went, and it was determined that I did indeed need glasses.

I was also well aware that when you got sick, you just suffered. I vividly remember ear infections and tonsil infections that were suffered through. I remember my mother rubbing my neck and chest with Vic's Vapor Rub in an attempt to deal with my chest colds. I even remember her dosing me with "green drops," an old cure from her childhood. I mean literally from her childhood. The bottle was from the 1930's, and I was sick in 1980. As it was still liquid and green, I must assume it was very high in its alcohol content. She poured it in my ears and gave me a spoonful with sugar by mouth, as the bottle advertised many ways of administering the treatment. It did me no harm, but I am not sure it helped me. Perhaps it helped my mother. She must have been so worried and knew she could not afford the doctor's bill.

Lack of insurance affects children in other ways. I remember the day I came home from school and asked to be on the soccer team. I was told no. The family could not afford the injuries sports would entail. Even PE class or recess was problematic, as eventually you would be injured. I broke two pairs of glasses, broke my fingers, and badly sprained my wrist at school, only to be berated for hours by an abusive father. "Don't you know how much this will cost us?", he screamed.

And speaking of abuse, who recognizes the signs of abuse better than a doctor or a nurse? If I could have been seen regularly by a doctor, would they have seen the welts and bruising on my legs and arms and put two and two together? Would they have quietly asked the right questions that could have released me from years of torment? But alas, as an uninsured child this opportunity was denied me.

Who addresses the psychological torture of lack of appropriate treatment? I used try to sleep while worrying about broken fingers. Would they always be crooked? Would the other children make fun of me? I remember the day in sixth grade I badly sprained my ankle. I could barely walk. My mother wrapped my ankle in an Ace bandage, and my grandpa loaned me his geriatric walker so I could go to school. I begged my mom for crutches instead. "I am sorry", she said, "we cannot afford it." My face burned with shame as I hobbled down the hall with a walker too big for me to use. As the snickers echoed down the hall, I wanted to die. Why did life have to be this hard?

So that is the child I was, and that is how I felt about lack of access to care. If you had asked me then to speak out about a need for reform, I hope I would have been brave enough to act like Marcelas. I hope I could have spoken as clearly about the need for reform. I would like to inform those folks out there that don't believe a child can have their own opinion on heath reform: Yes, they can. Perhaps, if I could have spoken to members of Congress in 1983 when I was 11, Fred would be alive. Tifanny Owens would be alive. I thank you, Marcelas. You are brave and wonderful. Your mother would be proud.
Posted by Regina Holliday at 5:02 AM