To Boldly Go Where We Do Not Belong 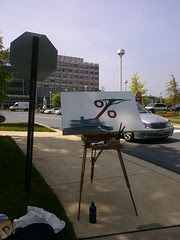 Painting at Holy Cross
Originally uploaded by Regina Holliday
I paint in public settings. Sometimes, I set up my easel on a busy sidewalk in front of a hospital and begin to analyze patient care using cadmium red. Or I create a beautiful and tragic painting on the back of a business jacket then ask my dear friends to wear these jackets in a room filled with traditional “suits.” I ask them to go where they do not belong.

I tend to embrace outsider art. I tend to appreciate the work of those without formal training who paint because they must. There is a spirit and a drive within their work that is not easily surpassed by technical mastery of the form. I tend to love to see art in unusual places and artists where they do not belong.

This past March, I recited poetry at Bus Boys and Poets during a celebration of healthcare reform. The room was filled with activists, musicians, and poets. There was quite a stir when an entourage of well-dressed figures entered the room and sat on the front row. I recited my poem “Wheals on the Bus". I spoke of riots and rights and data access. I spoke of Martin Luther and Martin Luther King Jr. I spoke of Rosa Parks in relation to healthcare reform. It was a powerful poem. As I stepped off the stage I stood in front of the reason for the entourage. Rep. John Conyers, Jr. (D-MI) stood up clapping and held my hand and thanked me for the poem. A congressman stood within a sea of artists, and we welcomed him.

This week I saw congressman Conyers again. He was asking the comedian Stephen Colbert to excuse himself from a Capitol hearing and submit his testimony into the record. This was too serious a proceeding for a comedian to take part in. He would only distract from the real purpose of the day or perhaps he was only there to promote his show or his march. He did not belong.

I suppose in 1981 there were people who thought Jack Klugman did not belong on Capitol Hill, either. Jack was the lead actor on a very popular show called Quincy, M.E. He was only an actor portraying a doctor, but he had come to speak about orphan drugs. The room was packed with reporters and cameras as Klugman spoke, and his appearance that day is part of the reason the Orphan Drug Act was passed. The other part was the patients. The room was filled with children and adults all suffering from the effects of their rare diseases.

I am so glad an actor and a large group of patients came together in common cause to help those who suffered so. I am sure that day seemed as much a three-ring circus as the recent Colbert appearance.

I will be painting at a conference soon. I will have my easel near the stage and paint and live tweet, and perhaps, I too will seem to be a circus act.

On Tuesday the 28th and Wednesday the 29th of September I will be in Philadelphia. I will be attending the E-Patients Connections 2010 Conference. I will be speaking at the conference about patients’ rights, special education, and participatory medicine. I will be one in many. There are many amazing people working toward positive medical outcomes attending this conference. Looking through the speakers list I see CEO’s, doctors, HIT designers, Pharma reps, and individuals involved in government. I also was pleased to see a poet and an actor. Perhaps things are becoming more inclusive. Perhaps there are fewer off-limit venues for patients and artists.

On Wednesday, I will speak in the morning. At the end of my speech, we will auction off the work I painted on site. It will be a three-panel piece explaining the current role of patients within HIT and the vision of what that relationship could become. I will use the metaphor of a child on the playground to visualize this complex subject. It should be amazing. We will live tweet the event, and people can bid online with the hashtag #ePatCon. All proceeds will go to Ivymount School. This is a non-public school that focuses on helping children with autism.

Whether an artist paints at a conference, or an actor speaks on Capitol Hill, it is important to being willing to step outside the comfort zone. This is a good thing for people and patients to understand. Do not let anyone tell you that you do not belong. When you present the testimony of your health history don’t excuse yourself from taking part in the ongoing discussion.
Posted by Regina Holliday at 5:18 AM