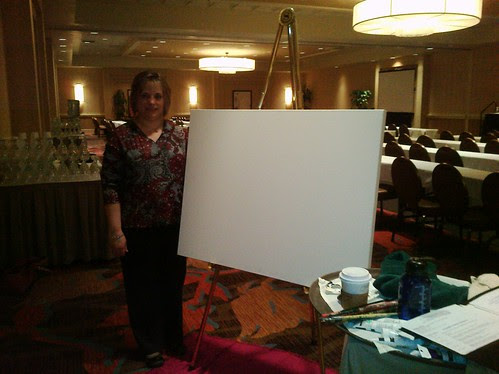 I spent the last week in Oklahoma attending the 9th Annual Rural Hospital Conference presented by the OFMQ, the Oklahoma Foundation for Medical Quality.  I had been invited by Lisa Wynn and Elanor Wallis from the OFMQ and Corrie Kaiser from OSU Center for Health Sciences.  I was there to create a conference painting and deliver the keynote speech centered on the role of the patient in relation to quality and HIT (health information technology.)  I was so happy to be there and as I spoke and painted my little sister Esther Fischer sat beside me.  I had taught her how to live tweet from my Twitter account, and we once again became the amazing team we had been as young girls. As I stood upon the dais, I dove within the tale of our medical story and the history of my youth in Oklahoma.   I felt my childhood drawl return to me and open like a prairie flower as each word escaped my lips.   I was drawn back to the life that led me to this point.  As one attendee said to me after hearing my speech, “Everything in your life happened for a reason.” 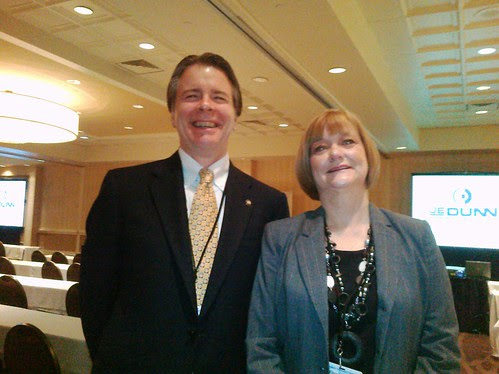 I was very blessed to attend this event because I heard a different perspective than the traditional comments I hear at most HIT events.  At 8:45 in the morning Brock Slabach, Senior Vice President of National Rural Health Association presented his speech entitled “National Legislative Update &  How to be an Effective Advocate  Oklahoma CAH Conference. “  He spoke about rural health throughout the nation, and specifically in Oklahoma.  He began to talk and I began to paint.  Brock spoke about the hopes and fears that many rural health providers have regarding pending legislation: ARRA, HITECH, Affordable Care Act, and the Ryan Plan.  The worries and concerns strode back and forth across the partisan political divide.   He was painting a rather undefined horizon with his words.  I began to recreate his imagery in paint.  I could feel the storm of worry and uncertainty as each bullet point within his slide set shot across the screen. 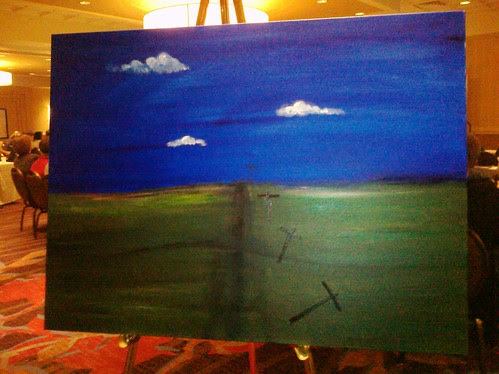 An ominous sky began to spread over my canvas.  It is blue and relatively flat unlike virtually every over sky I have ever painted.  Traditionally my skies are painted with data swirls and filled with symbols of deliverance via cloud technology.  This sky is still. A few small clouds are isolated within the piece and sprays of far off rain descend.  This is an Oklahoma sky and the storm is coming.   This is rural Oklahoma with too little broadband access and no cloud EMR coming to aid small critical care clinics.  Below this sky, a field smeared with the promise of winter wheat fills the lower half of the painting.  A poorly defined road disappears into the distance.  It is barely a smudge of dirt or gravel. The infrastructure is failing and underfunded. 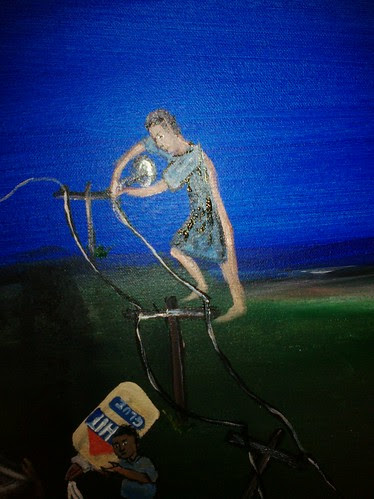 Beside this forgotten road, Telephone poles grow small in the distance.  At the end of the line, a patient speaks urgently into the phone line as it has morphed into a stethoscope.  The patient is too large for the distance and scale of the piece.  My sister chuckled at his size, “Isn’t he a bit big?”  I answered her, “You know I have never been overly worried about perspective nor scale nor following the rules of art.”  He is big because he must be. He is the patient and his need is great. 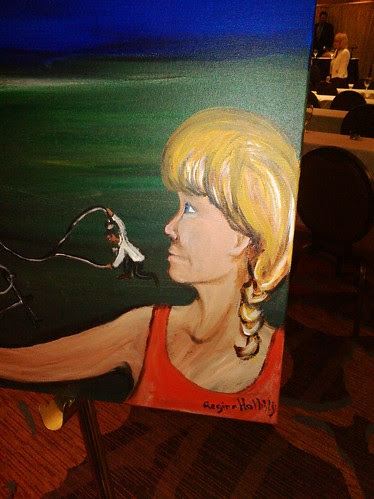 The telephone poles in foreground have fallen down.  Communication cannot be sent if there is no method of support.   A doctor kneels, trying to hold the overly heavy stethoscope.  He is attempting to listen to the far off patient.  The doctor is far too small and straining under his load.  He is alone and understaffed and trying to utilize a broken system. 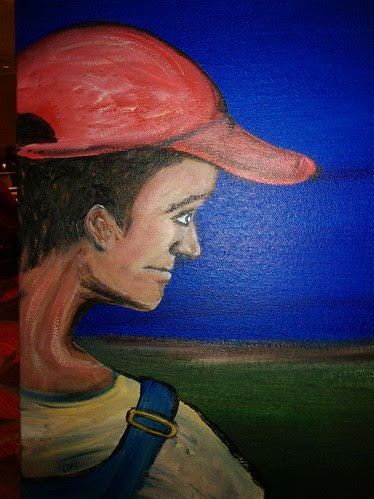 To the extreme right and left of the painting a farm couple spans the canvas.  The farmer is concerned. He stares in stark profile, stretching his hand across the road.   He clasps his wife hand and she looks up at his solemn countenance.   Her arm also strains to connect with him.  They must travel upon this road.  They are “off to see the Wizard,” and a tornado is rapidly approaching.   This was the image of the farm family I heard in Brock’s speech.  This is the strain of a system where families must often travel many miles to get care.  Is the farmer’s back to you and his arm unnaturally twisted?  Or is he facing you and his neck is craned at an impossible angle?  This image is wrong, twisted and backward, representing laws passed by bureaucrats coming from districts that represent a less than 20% of a rural population. 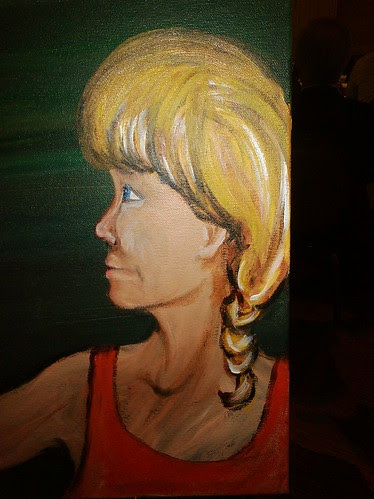 Look at how gently this farmer holds his wife’s hand.  It seems as though she is descending from a buggy or being greeted as a bride.  Look how young they seem.  But perhaps they are truly elderly, and this is how they see themselves through the mists of time.  Perhaps they have been left behind on the farm.  Valiantly they try to harvest wheat, bending damaged knees above the combine seat or clasping the feed-truck wheel using fingers swollen with arthritis.  Their need is great and their options few and without the funding provided by Medicare or Medicaid they are one bad harvest away from abject poverty. 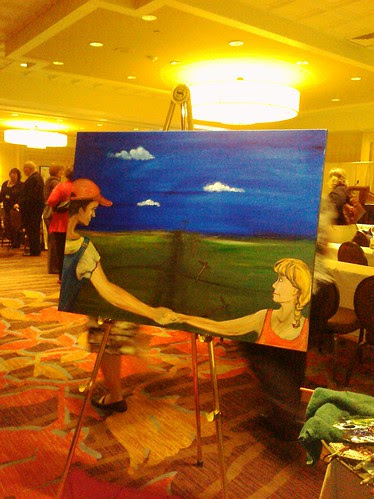 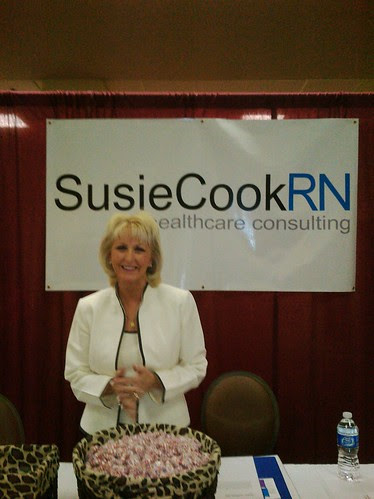 As the day continued I heard about HIT glue.  The adoption of Electronic Medical Records and a fully functioning Health Information Exchange has created a great deal of hope among providers.  I heard Susie Cook, RN explain the change process that medical practices undergo as the implement a new EHR (Electronic Health Record) system. 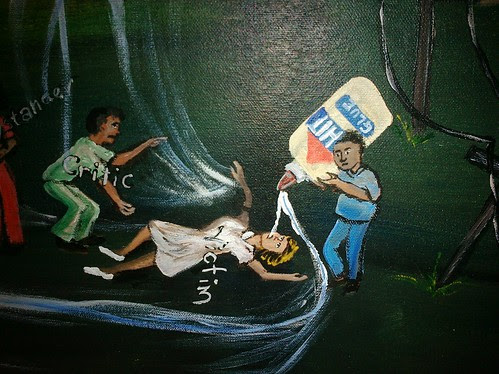 She mentioned the four types of personalities the staff tends to embrace.  First there is the Victim.  This is often an older or conservative nurse not confident with using new communication technology.  In the painting I depicted her fallen upon the ground wearing the classic white nurses dress while virtually drowning in the flow of HIT Glue.  Beside her is the Critic who offers no help and only hinders.  Susie says this person’s stance must be stopped as soon as possible as it can bring down the whole team and does not help the victim. 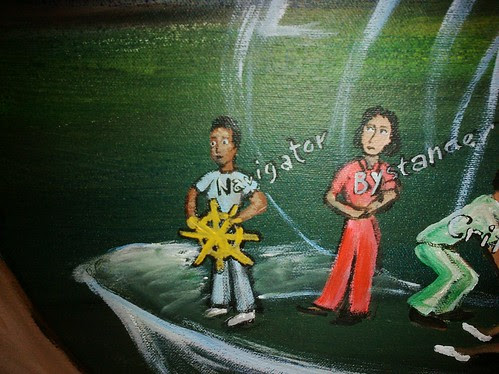 Next to the critic is the bystander.  She stands with her eyes rolled to the side and her arms across her chest.  She will not hinder nor will she help.  Finally there is the navigator, who stands to the far left.  He wants to help and has his hand on the wheel.  He will sail the EHR ship away from the overflowing stream and into calmer waters.  The EHR ship is a sailing vessel.  It is exploring and testing the waters, it is just beginning its journey. 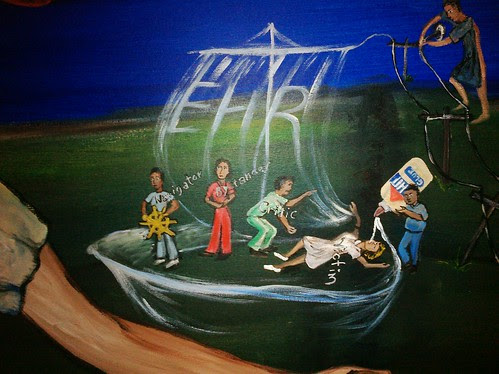 As I explained this ship imagery before the gathered crowd in Oklahoma, I mentioned my first thoughts at being asked to speak on April 12th 2011.  It was almost 99 years to the day that the Titanic sunk.  When I speak about HIT I often ask what sunk the Titanic.  Most people respond an iceberg.  I say no, failure to correctly use wireless communication is what sunk the Titanic.  There was a wireless set on the Titanic and if they had only used their information exchange correctly, over a thousand lives would have been saved. 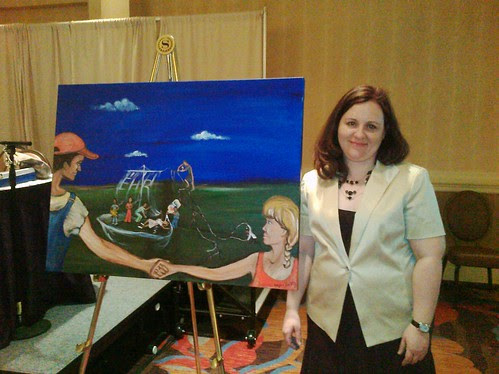 So when we talk about the painful process of EMR implementation, we must think of the lives saved.   When we talk about the desperate need for a fully functioning HIE, in your mind’s eye I want to you to think of those brave navigators who with a compass and the stars set sail for unseen shores.   That is where we are right now and we have a whole world of better health care to discover.
Posted by Regina Holliday at 9:11 PM