Joy.
I want you to really think about joy.  Think of the joy of a small child playing.  Think of how that joy lights up a child’s entire face.  It seems as though they shine as brightly as the sun.  Then life passes by and often that sun sets.  We spend our adult lives searching for moments of joy.   And here and there they appear: a wedding day, the birth of a child or perhaps even in an amateur puppet show.
On the evening of September 25th 2011, an ensemble of dedicated healthcare enthusiasts gathered on the main stage of Health 2.0.  We gathered at the same time that the Health 2.0 VIP cocktail reception was under way.  Other than our small group the venue was completely empty.  Some of the performers had weeks in which to prepare and some of them were drafted on the spot.  Several attendees from the Office of the National Coordinator of Health Information Technology thought they would be the audience, but instead became puppeteers.  We were able to film and perform the show three times.  It was wonderful.  Each time the cast offered great ideas to improve the performance.  As their arms shook with fatigue, they smiled and danced and rapped.  They were brilliant.  From my perspective on the stage over looking the row of puppeteers and voice talent, I can assure you I saw a look upon their faces like those of my pre-school students.
Their faces shone as bright as the sun and we created a rainbow.

The puppet show came very close to not happening at all.   It was an idea that came out of a data group planning committee meeting for Health 2.0 San Francisco.  We had been discussing some elaborate data sharing concepts and agreed that many were complex and needed more explanation.  I suggested we could do a short puppet/Muppet show explaining the Rainbow Button Initiative.  After the call, I spoke more with Hamish MacDonald, co-founder of Lifetime Health Diary, and Mark Scrimshire of HealthCamp about the play.  There would be puppet roles as well as actors in the tradition of Sesame Street.  Then I had the honor of speaking to the famous Ross Martin, composer and lyricist of “Meaningful Yoose Rap.”  He agreed to do the rap.
We were ready to roll, but in the week preceding the event, I got the dreaded email from the Health 2.0 staff.  The show schedule was running long.  We would have to cut the puppet show to less than five minutes.  As such a cut would remove most of the speaking rolls, I told Health 2.0 to pull the show from the schedule.  I shared my sadness with Mark Scrimshire.  He came up with a brilliant idea.  We could film it at Health 2.0 and post it online.  I responded that we could even enter it into the Disposable Film Festival sponsored by Practice Fusion.
We were back on. 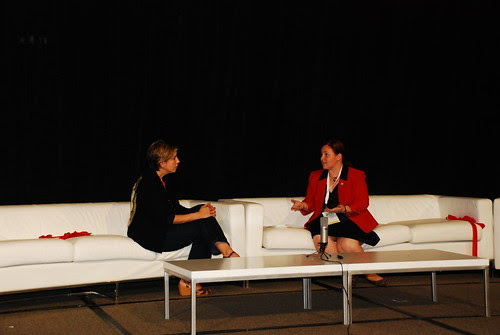 Several amazing folks agreed to play their roles onstage as people not puppets.    Lygeia Ricciardi, Senior Advisor for Consumer e-Health at the Office of the National Coordinator of Health Information Technology would play herself upon the stage as puppets began explaining the Rainbow Button Initiative.  Claudia Williams, Director of State Information Exchange Program at HHS, Office of the National Coordinator of Health Information Technology, would also play herself until we realized we needed a voice to play the Earth Mother/Green Button and she would quickly change rolls.  She dove into the roll and even performed a rap with no preparation.  I too would be on stage as the patient/caregiver trying to navigate these data access waters.  Mark Scrimshire, the co-founder of Health Camp Foundation, would appear onstage as the white button and would rap as well.
Each puppet had a voice actor and puppeteer, and wow, what a team each pair made! The puppeteer Andre Blackman performed the part of the doctor. 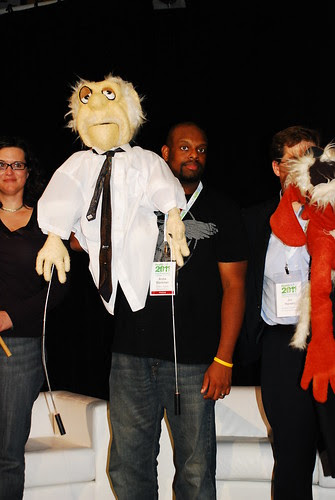 Andre is very involved in public health and is the Director of Digital Communications/New Media at the American Heart Association.  The voice talent for the doctor was Jim Hansen Vice President and Executive Director of Dossia Consortium. Erin Poetter, of the ONC was the puppeteer for the Nurse Puppet.  Sunnie Southern, founder and CEO of Viable Synergy, provided the voice for the Nurse. 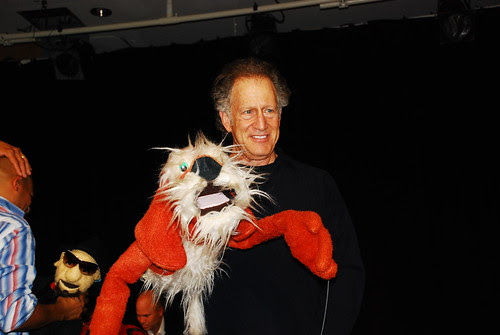 The loveable dog was the voice and puppeteer work of Lon Levin, Illustrator and Designer of Levinland Studio.  Award for best eyebrow manipulation must go to Katerina Jackson-Suchkova http://www.flickr.com/photos/60284414@N05/6198652217/, marketing director of Lifetime Health Diary, as the puppeteer of the Medical Records Department Puppet!  Dan Munro, CEO of iPatient, was the voice talent that greatly augmented these amazing eyebrows.
An archetypal character puppet portrayed each Button that creates the Rainbow Button Initiative.  A Military Puppet represented the VA Blue Button. 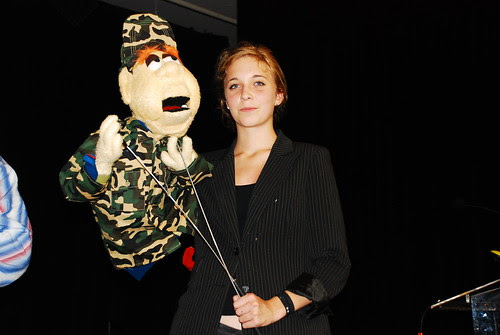 The puppeteer was Megan Mitchell, a 15 year-old artist from Washington DC.  The Voice talent was proved via the booming voice of Matthew Browning, RN and CEO of YourNurseIsOn.com.  The Green Button was designed as an Earth Mother Puppet.  Claudia Williams proved the voice of the Green Button and her puppeteer was the hard working Erin Poetter. The last button to be portrayed by a puppet was The Red Button representing privacy.  We thought a celebrity puppet would be an understandable puppet representing a need for privacy. 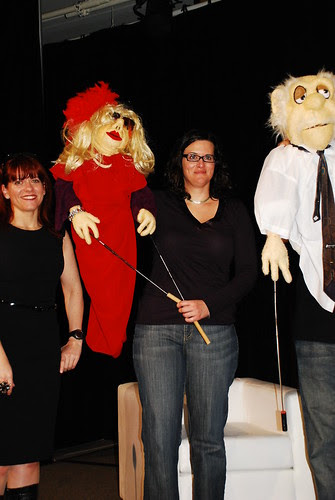 Cindy Throop, Health IT research Analyst for RTI, was the puppeteer of the Celebrity/Red Button Puppet.  The celebrity puppet was even granted her own bodyguard played by Alex Fair, CEO and founder of FairCareMD. He was wonderfully intimidating in a Secret Service kind of way.  Louise Schaper the CEO of the Health Informatics Society of Australia was amazing as the voice talent of the Celebrity puppet.  Her Australian accent gave this puppet quite the celebrity flair. 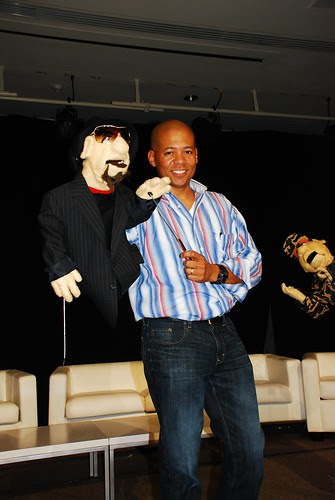 Finally at the end of our little play the Ross Martin Puppet rises up and leads us in a rap.  Ross played himself via a voice recording.  The puppeteer was Damon Davis, Special Assistant to the Office of the National Coordinator of Health Information Technology.  He was incredibly into the role, moving his puppet to the beat of the rap. Ross writes about his involvement here:
The American College of Medical Informatimusicology: The Rainbow Button Initiative: A new milestone in Medical Informatimusicology history has been reached with the release of The Rainbow Button Initiative video from the Sep...


We had the honor of being filmed by Gregg Masters, CEO of Xanate Media with still photography taken by the Health 2.0 staffer.  Gregg also edited the production and posted it online.

That was all of us.  We were patients, providers, techies and employees of the government.  And we were filled with joy.  It may seem that a puppet show is a silly and simple thing, but puppets can do amazing things.  They can explain complex concepts, like reading or data sharing in health.  They can even help you say goodbye.  As we ended the session, I explained where the puppets came from.  They were a wedding gift to Fred and I from his teacher Gerald Snelson.  We had loved these puppets and I know Fred would be so glad to see them used in this new way.
For Fred was a puppeteer himself, and if you have not seen it yet.  Here is his final puppet show.

Posted by Regina Holliday at 9:28 AM