Please consider following the entries on


CareMoms as well my regular entries from this advocacy blog.

This is a cross-post from that blog.....
A little over a year ago I met Dr. Chuck Denham, CEO of TMIT  (Texas Medical Institute of Technology) on the Stage of the Quality Net 2010 conference in Baltimore.  I had just finished a moving speech about the importance patient/family access to the electronic medical record.  After I finished speaking, Chuck decided he must meet with me. Before we had even begun the after speech Q&A, Chuck asked me if I would like to be involved in his massive patient advocacy project with TMIT hosted at SafteryLeaders.org.  I said yes, and we announced on stage that we would work together to promote great positive changes in patient safety in 2011.

Soon after that, I met with his film team.  We filmed a short video at IHI in December 2011.  It was entitled Remember Your Hollidays.  The film team of Colin Gabriel and Matthew Listiak edited it the video quickly and it was posted on youtube in late December.


Throughout the spring I had conversations with Chuck and Laura Slayton,social media guru at TMIT, about the various safety initiatives of TMIT, including a concept called


CareMoms — SafetyLeaders.org The focus of CareMoms, as defined by SafteyLeaders, is to engage and develop leaders – who are moms, dads, grandparents, sons, and daughters in the community. These people can bring their power of persuasion to reduce healthcare accidents that cause more than 200,000 deaths in America, and many more globally.  These CareMoms/Dads can rally around their local hospitals and give them concepts, tools, and resources that hospital leaders and healthcare governance boards need to "chase zero" accidents and win the war on healthcare harm.

After discussing this concept with Chuck, I designed his jacket for the Walking Gallery, a patient advocacy movement consisting of wearable art, using an image of a universal and infinite CareMother encircling our world. 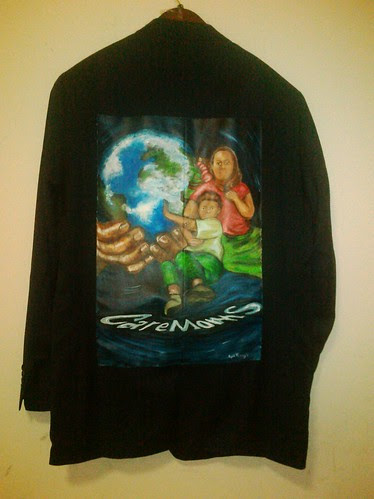 Soon Chuck asked me what I would recommend as the greatest thing that TMIT could create to further the work of patient advocacy.  I told him a Speakers Bureau for patients.
For the last six month, the TMIT team has been doing exactly that.
So, last week at QualityNet 2011 in Baltimore I saw Chuck once again upon the stage.  He spoke of the amazing patient safety initiatives on the way and he encouraged the entire crowd to visit


SpeakerLink.org: a site where seeking facilities can find health policy speakers with a patient or patient-centric view.

I tweeted my joy from the back of the room upon seeing our dream become reality.  Then the actress and patient advocate Alicia Cole began to speak.  She told a powerful story of her brush with death due to a hospital inquired infection.  She spoke in loving terms of her Mother and Father who stood at her side as steadfast advocates, thereby saving her life.  She mentioned how her mother saw a black spot no larger than a dot from a sharper marker. a dot that would have grown and killed Alicia in hours without her Mother’s intervention.
Alicia was an amazing patient speaker and encapsulated the reason why we speak.  Her words can change our world.
Please remember us this Holiday Season.  Remember the Hollidays.  Remember the Alicia’s.  Remember the black dot that was not a speck of coal within a Christmas stocking, but instead a speck on Cole.  Remember a mother who saved her child.
Happy Holidays to all the CareMoms, CareDads and the patients who suffer; we shall be thinking of you.
Posted by Regina Holliday at 12:30 PM