The Word of the day is "Chaordic"

I grew up watching Sesame Street and fell in love with the idea of living in a city, and ended up moving to one. I watched felted monsters and people peacefully coexist, and now I paint diversity. I watched adults refuse to see "Snuffleupagus," so I now I mention the elephant in the room every chance I get.

And I learned about the word the day. For a child who truly struggles with reading, the word of the day is very special. It is repeated many times phonetically, visually and with humor. You cannot help but remember it.

Thursday May 17, I attended the Learning Health Systems Summit at the National Press Club in Washington, DC. I was invited by Josh Rubin from the Joseph F. Kanter Family Foundation upon a recommendation from Colletta Dorado CEO of AZZLY.  There I heard the word of the day. It starts with the letter "C," the word is Chaordic: a method of governance that blends chaos and order. This word became the painting of the day.

In this painting Joe Kanter stands upon a hill. He rests his hand on a tree of knowledge as he points to a city in the distance. Here is the city on a high hill for all to see. This is a symbol of the Learning Health System. This a big data idea that thought leaders like Joe have been working on for a long time.

What if your data did not have to die in dusty paper files and unconnected electronic silos? What if many private institutions, non-profit organizations, research centers, government entities and individual patients decided to share data? What if we could do this over a span of years creating an ever larger data set? That data set could be accessed by the many in a timely fashion that will enable both the individual and the organization to make informed health decisions.

That is the city on the hill back-lit by the cloud. For in the cloud this vision can become a reality. To the far left of this painting is body of water that contains islands of excellence. Here golden statues raise their arms in triumph. They have reached summit of care on their island. But this is not enough to help all that suffer in our country, we must spread data via the cloud to each other. Information silos kill, whether or not they are gilded in gold.

Below the city, the sky, the islands and Joe is a steep hill. The incline is sharp and the climb will be hard while many of those who ascend carry heavy burdens. Right below Joe and close to the summit is a doctor. He carries twin buckets filled with HIT(Health Information Technology). He strains to carry his load and he looks to left at the islands of excellence as though to ask, "Why aren't you climbing the hill with us?" To the doctor's left a blue collar American worker holds the US flag as he nears the summit. He represents the everyman, the tech crew and staff of the Press Club itself. They greeted me warmly as I painted and asked many questions and were amazed. They are part of the picture.

Below the Doctor is a heavy set woman with a basket on her head labeled "community." She is the caregiver, the strong back. She is the basket in which we are placing all of our eggs and she is tired but enduring. She marches toward the summit.

To her right is a mother. She hefts her child upon her back as she strides up the hill. She has the weight of the next generation upon her and the concerns of her parents on her mind. She too needs access to data that can effect the health choices of her entire family.

To her right a young man hefts a sign that says: "Research." He represents all those who would make our world a better place if he could only read and access data. If data sets were open imagine what he would do?

At the bottom of the painting to the far left, a nurse holds a banner. She represents the nurses' voice and she is almost pushed off the canvas. I attend far too many conferences, round tables and summits where virtually none of the speakers are nurses.

To her right is a business man or CEO. He looks up the hill toward the summit. He carries a banner that says "Private Public Partnership." He wants to be part of this and his insight and business acumen will be valuable.

To his right a woman holds high her flag that says: "Hospitals." Hospitals will be such a valuable part of the Learning Health System, as they are a repository of so much data.

Beside her a small child stands. She is a little girl in pajamas and holds an Elmo doll. This is a visual reference to one of the last slides by Harry Cayton from the Information Governance in the UK. He showed a slide from Sesame Street with Elmo, a patient and a doctor. To paraphrase he said "Look at that patient, it hard to feel confident when they take your clothes away. The doctor is fully dressed and in charge. Look at the caregiver: just something that is warm and fuzzy."

To make this system work all of these players must be held in equal esteem.

Finally, we come to the patient to the far right of the paining. His Johnny is open, his hair is gone. Upon his shoulders he bears a yoke that carries two buckets. One bucket is labeled "private enterprise" and one bucket is the "government." A couple of people who viewed this were taken aback. They did not want to see a patient under such a heavy burden. I told them, "Look he has a yoke. Have you ever used a yoke? Marvelous invention! It lightens the load through balance and utilizes your core sttrength. Don't feel sorry for this patient. Feel sorry for that doctor hauling all that HIT uphill in two buckets at the end of his straining arms. That is painful."

After all, the patient is the great unknown variable as we climb the hill. He has not yet been activated and could do so much good. After all, as Dave DeBronkart would say who has more "skin in the game" than the patient himself? I guess is kinda frightening trying something new. It is sort of chaordic. But that is the energy that we need to crest this hill.

When I begin a conference painting I do not know what I will paint. Oh, I know the HIT space and the world of patient safety, but I do not know what the speakers will say that will inform this piece. I will have to create the piece in real time while following the rules of good composition. It is chaordic and it is beautiful.

See, things change over time. When I was a child I could barely read, the word of the day was a summit I tried to reach. But now, I am an accomplished reader. Today if you watch Sesame Street the adults do see Snuffleupagus. After 17 seasons the writers decided the gag must go. It was more important for children to know that the adults would believe them if they were speaking the truth, even if that truth was a hard thing say. Even if that truth was about the abuse the child was suffering. I know a lot of patients who need to attend events like this one. They have value to add and another world view, and just like Big Bird they always point out the elephant in a room. 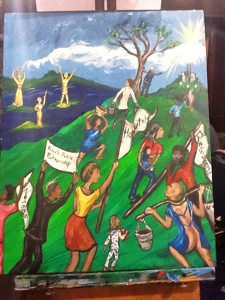 Posted by Regina Holliday at 10:07 AM