You may think Matthew Holt is just some eccentric chap who fell into the world of health information technology and thought he would try it on for size.  Some may look at his raised questioning eyebrow, listen to his rather caustic statements and think that Matthew is just dabbling in this space until something else catches his fancy.

They would be wrong.

Matthew hides so much behind a clever jest or turn of phrase. I have watched those blue eyes fill with worry rather than mirth.  Matthew cares very much about the future of health, and not just the sparkly tech- ‘I have an app for that’ side of health.  He makes a point of inviting patients to his Health 2.0 events.

I asked Matthew to join The Walking Gallery many times, but he always redirected explaining he did not own a jacket.  I continued to pester him, until he finally admitted,  “Well, I do own that one jacket, but it is red satin.  Will that work?”  I said yes, rather emphatically and then asked for his story.  Then Mathew told me he wanted to tell someone else’s story.

Matthew and his family are financially secure; they could take their baby to any pediatrician in the San Francisco bay area.  But they go to the Bayview Child Health Center. They go to the poverty clinic and their child is seen by doctor Nadine Burke.  She is changing the practice of medicine one child at a time.

This is Matthew Holt’s Jacket “ACES.” 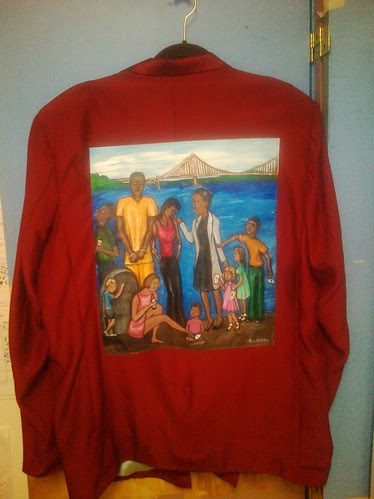 Life is a gamble they say.  Some win and some lose, but those that have the deck stacked against them are much more likely to lose.  Imagine we are are all playing poker, aces are high and it is five card hand.  The player holding 4 of a kind in aces plus the kicker (that random extra card), is very likely to win the hand.  In this jacket vinette I worry for the winning four of a kind.

In this painting, children are arrayed around Dr. Nadine Burke.  Four of the children show playing cards in their hands; each child holds an ace.  The children look worriedly at their parents and the doctor as the she advises one parent.  These children combined with the parents represent the ACES: Adverse Childhood Experience Study.  This study was a joint research project between Kaiser Permanente and the CDC conducted between 1995-1997.  The baseline participants are still being tracked today. 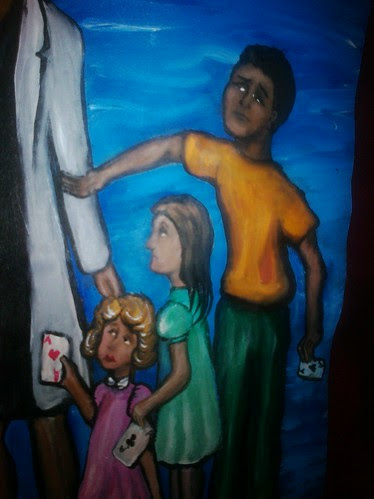 The results of this study were astounding.

Participants were asked if they had experienced adverse childhood events in their households. To the far left a man looks up as he prepares to ingest an anti-depressant medication. "Was a member of the family mentally ill or depressed?" 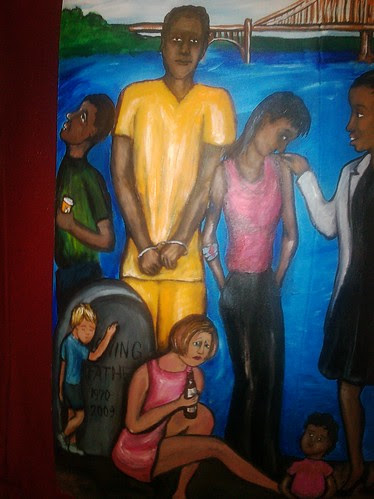 Beside this figure a large muscular man in an orange uniform and wearing handcuffs stares out at the viewer. “Was a family member imprisoned?”

Beside this man and to his right a woman with a bandaged arm and bruised eye is speaking with Nadine. “Was your mother treated violently?” 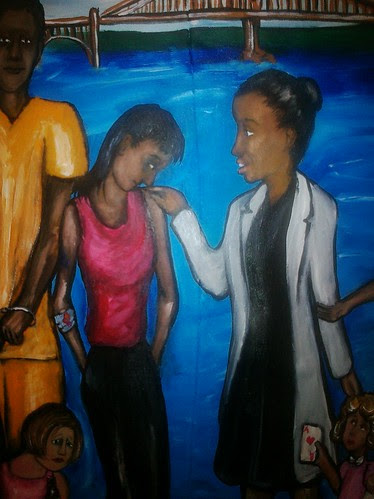 In front of the abused mother, another woman has collapsed upon the floor with a bottle of beer in hand. “Was a family member an alcoholic or drug user?”

Finally a tombstone completes the scene, “Was a parent absent due to separation, divorce or death?”

Participants who answered yes to four or more of these questions were at substantially higher risk for premature death and chronic health problems.  The research determined that children did not have to be subjected to direct physical abuse to suffer adverse effects in their health.  Just being in this hostile environment had a cumulative and toxic effect on the child’s DNA.  Of those studied with a four ACE’s it was found they were 260% more likely to suffer chronic pulmonary obstructive disease compared to a child with 0 ACE’s.

So Nadine is incorporating this study into her care design.  She is treating each child with the knowledge that they are predisposed to suffer certain health conditions.  I sincerely hope those technology firms designing electronic health records learn from her work.  The electronic health record cannot be an episodic receipt of care; instead it must provide a view of a life in its entirety.  What happened yesterday has great impact upon today.

As an adult reading this study, I know I must communicate more with my doctor, as I am one of those lucky ones.  I hold four of a kind in this game.  When my youngest son Isaac saw the picture he wanted to be included. I did not want to do that. But he’s the kicker, for no matter how hard I tried to have him live a childhood better than my own, his father has died.

So Isaac holds hugs the tombstone. I know in this way the deck is stacked against him. 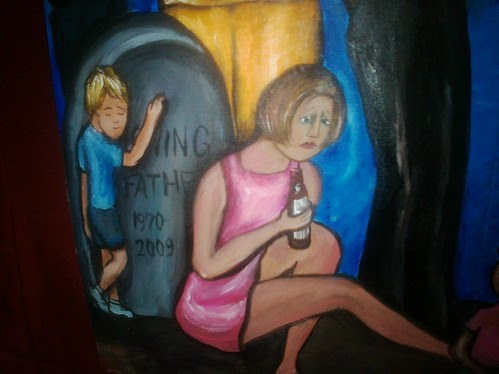 Posted by Regina Holliday at 11:00 AM