When I was a child I went to an elementary school that had few resources.  In fifth grade our class was donated a large amount of books.  We were very pleased to have them, but we had no bookshelves on which to place them.  My teacher was very enterprising though, and she contacted the local lumberyard and requested they donate some two by fours and cinder blocks so we could make shelves.  The lumberyard manger said yes with one caveat, we would have to pick up the supplies.

That year our fifth grade class had a field trip.

We left the school as a class with our strong backs and eager minds. We walked to the lumberyard.  Some of us grabbed the two by fours, some of us cinder blocks and some us combined the two to make a carry yoke for two students to heft.   We walked those blocks all the way back to school and up three flights of stairs.  Then we assembled those shelves and placed the books upon them.  We stood back and looked proudly at our work.  I cannot believe there was a class anywhere else in the entire nation who cherished their bookshelves as much as we did ours.

We loved those shelves because we overcame adversity and made that which we needed.  It wasn't pretty, it wasn’t perfect, but it was ours.

Recently, I wrote Pecking Order, a post recounting a webinar call on May 22nd between patients, a contracted PR firm and CMS officials.  The call was supposed to be a collaborative webinar session replacing an in person patient summit due to severe restrictions on federal travel. Sadly during the call patients did not have much time to speak. That changed an hour and a half in, when I spoke out. The patients took over the call and spoke about our views on the CMS funded initiative Partnership for Patients.

It became a call to action.

In the 22 days hence we have done quite a bit.

On May 22 we grabbed the domain name for Partnership with Patients and began the facebook group.  At this point there are over 300 members in the facebook group from every field of healthcare: patients, nurses, programmers, doctors, venders, transcriptionists and lawyers.

On May 23rd I posted Pecking Order.

On Thursday May 24th I spoke with Kathleen Siedlecki on the phone.  I encouraged her and her team to attend Mark Scrimshire’s Healthcamp on June 4th in DC.

On Friday May 25th I spoke to Dennis Wagner, co-director of the Partnership for Patients Initiative.  He apologized about the direction the webinar had taken.  He also said he would be joining the Walking Gallery.  I told Dennis we planned to crowd source patient ideas for how to best promote this patient safety agenda.  We scheduled a meeting with the P4P team at CMS offices on June 13th.

Over Memorial Day weekend, Kathy Nicholls, CMT, AHDI-F, Certified Inbound Marketing Professional, was hard at work volunteering her time to build the Partnership With Patients Web Page.  We bounced emails back all weekend.  I also spoke with advocates such as Helen Haskell and Julia Hallisy by phone.  Many of the advocates like Martin Hatlie, Pat Mastors and Amy Berman, that were part of the original call emailed back and forth throughout this time and in a spirit of sharing I looped the whole PR team into the email thread.  I got Out of Office replies from them all.

It was a holiday weekend, but for many advocates this is more than a job, it is a mission that we ply 24-7.

By May 31st the Partnership with Patients webpage was up.

Friday June 1st, Kathleen Siedlecki, who ran the P4P webinar call, visited the mural 73cents. I heard about the constraints both she and the government work within.  More than ever, I appreciated the freedom of being an independent advocate that collaborates with others. 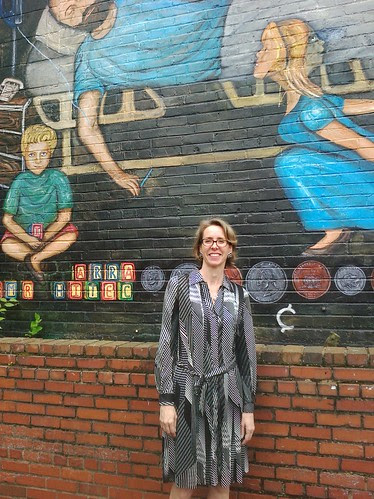 Saturday, June 2nd, I spoke with Chuck Denham, MD from TMIT and Jeni Dingman, patient advocate about this new collaboration. 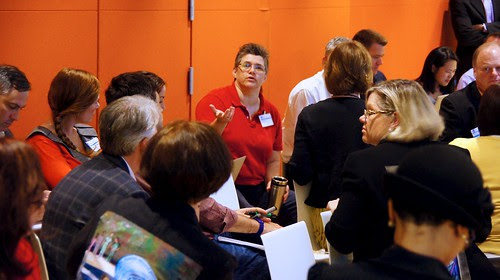 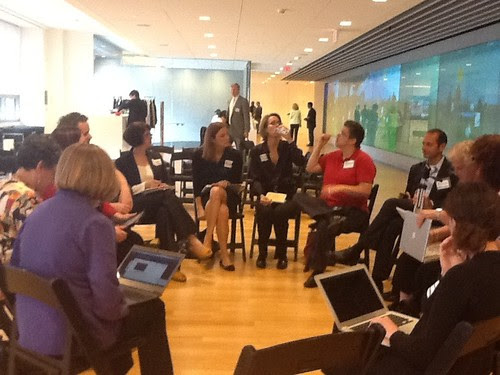 We were trying to build a grass roots strategy aligned with CMS and ONC goals ideally within one week.  We wanted to inspire regular folk to join the movement, like Robin Miles-McLean who jumped in feet first. Gregg Masters spoke about videos that could engage.  We spoke about connecting communities and connecting forces.  We spoke about sharing info on up coming events, as we did not know when meetings and conferences were being held both locally and nationally.

Fred Trotter told us about his focus on writing software for patients that reduced medical error.  We spoke about bringing the e-patient community into this dialog.  Susan Hull shared her experience of sitting on airplane ride beside a mother of 2 kids with cystic fibrosis, the mother had the marvelous idea she should administer drugs at the hospital and receive education she could carry home.

We spoke about creating a patient safety poster series for placing hospitals that are visually stimulating and not patronizing.  These posters could be images donated by artists.  We also could create a competition; young children could enter and receive a prize for best posters that support the Partnership for Patients initiative.  We acknowledged that many patients do not know their rights or safe practices within a hospital setting. We also spoke about QR code hijacking and other edgy ways to get the message across.

1-800 number for healthcare harm was an idea that was very well liked by the group.  We also wondered if that could be used to create a database of regional healthcare harm.  We talked about the potential of viral twitter attacks on hospitals with reports of harm, yet are not responding to those they injure.

We talked about the power of Engage with Grace.  We also talked about Honoring Choices programming from PBS coming out of Minnesota and Gunderson Lutheran’s amazing compliance with Advance Directives.

We spoke about a board certification in patient safety that is now available and wondered if any patient had taken the course.   We also spoke about SpeakerLink.org and the importance of including patients as paid speakers.  We spoke about the Plantree model of care and IHI open school and how that applies to this movement.  We finished up focusing on a photo resource that would show real pictures of patient care.  That has already begun on flickr, but it needs to be on Pinterest as well.

From that discussion and prior phone discussions with other advocates, I created this power point that was presented before CMS: Partnership for Patients meeting yesterday.

View more presentations from Regina Holliday
It was well received.

Dennis Wagner said he could see that some of these suggestions were immediately doable.  He said the next slide set he designed would have no stock photography within it, only crowd-sourced real pictures.  He would visit our flickr page and learn more.

The CMS team re-iterated that they did not believe the next meeting would be an in person one and it would need to be webinar again.  I then specified they must try to open it up to more people, so they should create a twitter hashtag so many more voices can be part of this discussion.  Kathleen thanked me for coming to the meeting and said she really enjoyed hearing our strong voice in this space.

I also announced that we were creating our own Partnership With Patients Summit in Kansas City September 21-23, 2012.  I spoke with Clay Patterson and Amy Burgess at Cerner and the folks at Cerner have approved hosting us in their continuing educational facility on the Riverfront property and former address of Sam’s Town Casino in North Kansas City.


I loved that facility when I visited it one year ago. Think Kaiser Permanente Center for Total Health, but even cooler, with more neon lighting, a town square and some music from Tron.  Some of the Cerner team looked at me quizzically when I told them how much I loved the space, they said, “You do know this is just an old failed casino, right?”

But I see with new eyes.  I see it with the eyes that saw cinder blocks become bookshelves. 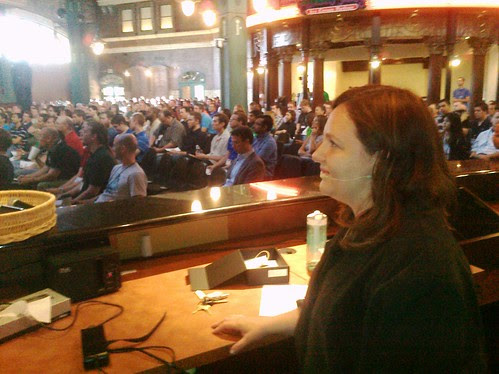 I see what can be without old prejudice.  When I look at Cerner I don’t see an old legacy EMR system.  I see a future cloud/ legacy composite that could save lives.  I see one company among many, many companies willing to collaborate with patients.  I see what amazing things we can accomplish if we all work together and shoulder this task.  I see a space where we can come together and educate patient speakers about HIT, patient safety and health policy.  I see the potential of helping 200 new patients advocates as the next generation of e-Patient Dave’s, Trisha Torrey’s and Regina Holliday’s.

So here it is the ask:  Who will take up their cinderblock and follow me? Register here.

Posted by Regina Holliday at 5:57 PM