I have a favorite word.  I heard it in a sermon over 20 years ago.  I even used this word as the title of my dear friend Kait B. Roe’s Walking Gallery jacket.

The word is Ephphatha.

This is word that Jesus used as he healed a man who was deaf and mute.  The word means, “Be opened.”  Immediately upon being healed the man who once suffered greatly in his ability to communicate, began to exclaim and the crowd responded in kind.

This past week was a great one for the word Ephphatha, as the results of the OpenNotes project (primarily funded by the Robert Woods Johnson Foundation Pioneer Portfolio) was published in the October issue of the Annuals of Internal Medicine. 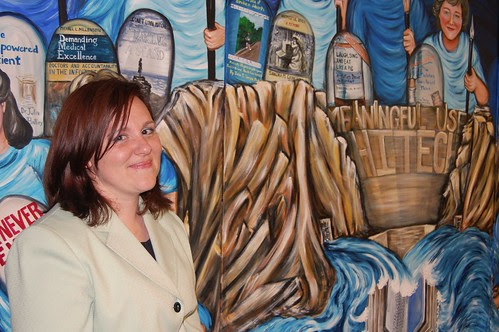 It was a great week for patients too.   I have been testifying these past 3 years about the importance of open data access for patients.  Much has been done to improve electronic medical record access in these past three years.  Meaningful Use stage one  specified that patients should be able to see imaging results, labs, vitals and after-discharge summaries.  The Blue Button download, currently in use by the VA, Medicare and Tricare, also enabled access to this information and a bit more.

But I testify that patients need complete data access and that means we should be able to see medical reconciliation reports, nurse’s progress notes and doctor’s progress notes.  I have said so vehemently and frequently in person and online.

I especially commented on the concept of open notes Twitter.

In June of 2010, I was part of a conversation thread on this topic.  While I was tweeting advocacy for complete access Steve Downs with RWJF joined the thread and told us to watch for the results of the OpenNotes project.  I learned about this project designed to study the ramifications of opening up doctor’s progress notes to patients.  I read about it a great deal in the two years hence.

I am glad to see the claims made by myself and other e-patients that open notes have great value now have scientific support.  In 2010, when we were advocating for open access we were given many reasons for denial.

We were told patients are not educated enough to understand medical language and would be emotionally damaged by reading the record, yet in the study 90% patients responded they understood what they had read and were not bothered by it.

We were told that if patients could read the record they would pursue more lawsuits against doctors; as of this writing I understand only 1-8% were concerned or offended by the contents of the notes and I have not heard of any report of legal action against the doctors in this study.

We were told patients are too lazy to check their record, yet 87% of those enrolled in this study did check the notes.

We were told that open notes would cause an unbearable increase in the workload for doctors, yet after completing the study doctors said the study either only added a modest increase in work or that it was negligible.

So post study we see so many fears were unfounded, and healing benefits came to light instead.  80% Patients claimed greater adherence to medication protocols due to access to the notes as well as better ability to follow their doctor’s recommendations.

Which brings me back to Ephphatha.

There is more within this report than dry statistical support of the belief that open communication can improve workflow and outcomes.  This is the moment when the walls of isolation fall down and those patients and caregivers who cried in silence, both deaf and mute, can finally join in greater communion within healthcare.

Here our hearts open and we sing.

There is still much to discuss on this topic.  When will we see access to nurse’s notes?  When will individuals who suffer in the behavioral health system have such access?  When will those patients who have succumbed to drug abuse have access?  Will we find that the reasons for denying such persons access to be as unfounded as the reasons that were once used to deny traditional patients access to notes? 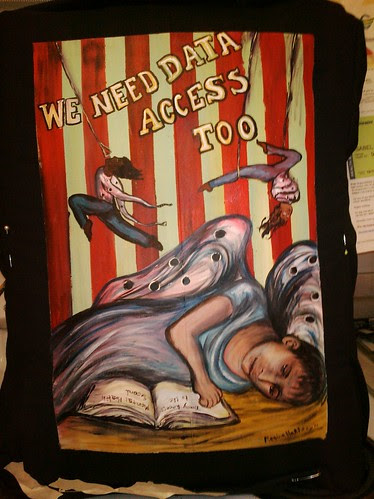 In DC on Thursday, October 11th 9:30- 11:30 there will be a public meeting on OpenNotes that will be live-streamed. I hope to see some of you there as we rejoice and question.  I will be live painting and I think that painting will be entitled “Ephphatha Revisited.”

Would You Want to See Everything Your Doctor Writes About You? by Lindsey Abrams, The Atlantic

Posted by Regina Holliday at 10:45 AM