I arrived a few minutes late because it was the earliest I could find a sitter on a Saturday with short notice.  A week before I did not think I would be attending this meeting.

I first heard about the goals of PCORI from Sue Sheridan in May 2012.  Do you know Sue?  She is a kind beautiful woman who is an advocate due to two medical errors.  Her husband Pat died in 2002 after a radiology report that described cancer was not communicated to his care team.  Their son, Cal, born in 1995 suffered brain damage due to neonatal jaundice.   She has suffered so, yet she strives to help others.  Many of us in the patient advocacy community rejoiced that such a dedicated advocate was selected to be Director of Patient Engagement at PCORI.

Sue called me because she was helping plan a PCORI meeting on data in July.  In early May she asked me to submit a bio to be considered as an attendee of this meeting focusing on data.   At the end of the month she let me know I wasn’t a good match for this meeting as I focused on patient records and this meeting would be about HIT.

I wondered a bit at that.  HIT is sorta my thing, but I shrugged my shoulders and went on with plans to create a Partnership with Patients Summit in September.  I got a few form emails from Sue after that and in one she encouraged all recipients to request to attend the meeting in October.  I also got a letter from Helen Haskell with the same request.  So I submitted a request to attend.  On October 9th, I got an email that said:

“Thank you very much for your interest in attending the PCORI workshop Transforming Patient-Centered Research: Building Partnerships and Promising Models, October 26-28, in Washington, D.C. We received more than 350 statements of interest and were overwhelmed by the commitment and passion expressed by our patients, caregivers and other stakeholders.

Due to limited event space and high demand, we unfortunately are unable to invite you to attend the workshop in person.  You are important to us and we want to capture your ideas and energy as we build PCORI’s patient engagement initiative.  We will provide a webcast for the workshop and opportunities for you to provide feedback on the workshop’s six breakout session topics. Details will be distributed before the workshop, so be on the lookout for another email from us in the near future.”

I recently learned one of my friends and fellow advocates Joleen Chambers got a similar response.

So, I thought that was that.  But on Monday I received an email from Sue that there was a mistake that I had not been invited, and even though it was late notice they would like me to attend.  So the mad scrabble to find a sitter began just as I was preparing to fly to Korea to present.  By Friday I found a sitter.

At 8:45 on Saturday I found myself wheeling art supplies into the grand ballroom of the Renaissance Hotel.  I set up my easel and began to paint the rest of the day. I would finish it at home this evening. 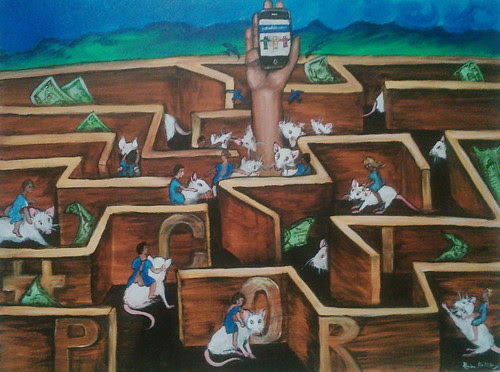 When I finished this painting and was taking a picture my six-year-old Isaac came over to look at it. He said, "What is the goal of this maze? To get all the money before the time runs out?" I thought about all the discussion I heard today and said, "Yes, Isaac that is pretty much it.”

My impressions of PCORI meeting day 1

My prior experience with patient partnering in research was had through participating in The Learning Health System Summit.  That is a group consisting of of public and private enterprise creating opportunities to share data sets and research.   I wish we had a transcription of that event.  I would feed it into a word cloud generator.  I bet we would see the word share looming large.  At the PCORI meeting I heard the words funding and incentives about as often as in a Meaningful Use meeting at an EMR conference.

I was initially dismayed that there was no WIFI at this venue, but was delighted when the staff had it turned on so attendees could tweet.  This event was live-streamed in the morning.  There was quite a lively twitter stream, with the majority of the tweets coming from individuals not in attendance.  I grew concerned when I realized the individual tweeting for PCORI was not answering questions on the stream.  I went to Sue and asked her the questions and tweeted out the answers.

In the afternoon we were put in numbered groups to attend workshop sessions.  I was in group number 5.  Lori Frank from PCORI facilitated our first session.   She stood in front of the group and called on us if we raised our hands.  She wrote our suggestions in small print on a large paper-covered board. When it came time to discuss the topics she had to say them out load since we could not read such small print. 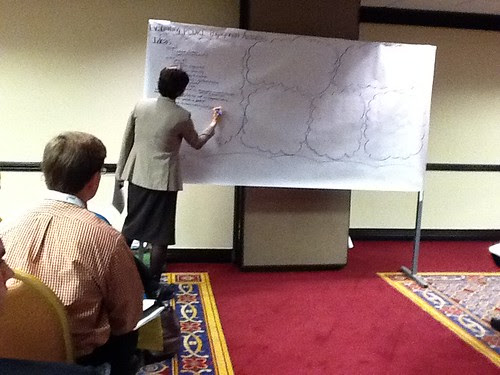 Sessions were less than an hour and then we would move to the next room.  Each time I moved I had to break down my easel and gear. Soon group 5 left me behind and I just stayed in the same room for the session.  Eric Meade from the Institute for Alternative Futures facilitated this session.  Eric discouraged talking among attendees. When I and another attendee began discussing our concerns that so few people applied to attend the PCORI meeting and many of those turned away, we were talked over by Eric and he called on another attendee.  He also wrote very small on the board.

In the next session I stayed. I tried not to comment too much, but when another attendee mentioned the board was unreadable.  I asked why couldn’t he write larger?  There was a note taker in the room for his benefit. Wasn’t the board for us?  He said it had to be this way and he had his reasons. 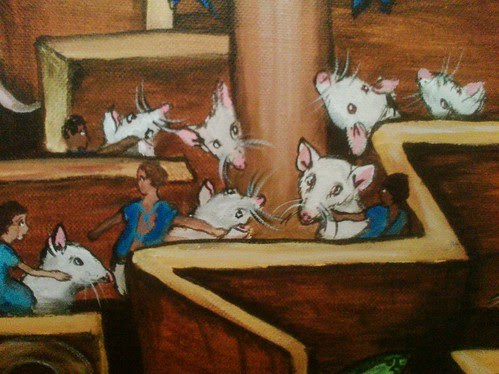 We were supposed to answer two questions on this conference day:

1.How can PCORI best measure the effectiveness of patient and stakeholder engagement in research?

2.What novel methods can patients and patient advocates propose for evaluation of research engagement that would capitalize on the growing networks of patients engaged in research?

I want to focus on that second question and the word novel.

Novel:  of a kind not seen before; fresh; new; original

I wanted to hear this group speak about the Quanified Self-movement, yet I met attendees who had never heard of Patients Like Me before today. If you look at this painting here is the hope.  This patient hand reach up out of the maze beyond and above the enclosing walls.  Here is the patient in the center able to see a new horizon, reaching toward the cloud informing a greater crowd of the greatness that is coming. 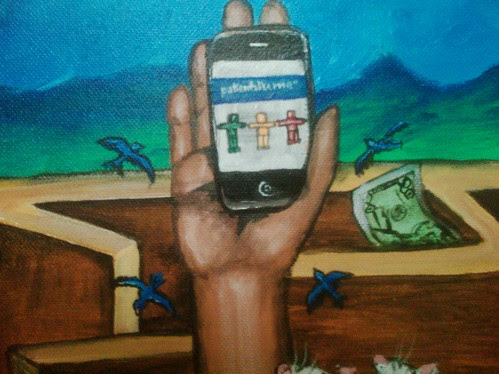 I want to see one aspect of PCORI engagement determined by a robust SYMPLUR report or perhaps a good Klout Score.

I want to see the folks talking about disparity without equating internet access and affluence. Mobile is the great equalizer.

I want to see a thriving PCORI group on Facebook, because although Sue is great patient advocate she cannot do this on her own. We need to support the mission in an open and transparent fashion.

I want to see an equal number of providers, patients and researchers in the same room taking with each other.  We will never have value in the eyes of the medical establishment if you keep having separate meetings.  Separate is not equal.

I want to see these novel things, so I can paint a different picture.

It has been a few days since posting this.  Since then I have introduced Sue to Josh Rubin from the Learning Health System and MarkScrimshire from HealthCamp as he specializes in Health conferences.  Sue was happy to hear of their work.

Kelly Young also posted a blog about this conference: Creating a Culture for Patient Centered Research.

A few attendees have reached out to me saying they felt welcomed and appreciated, and that is important to acknowledge.

In the comments field below Kelly stated my concerns better than I did in this post when she said."My concern is that PCORI will have novel goals, but then attempt to accomplish them using the same old ways of doing business. Internally, they need to consider what kind of relationship they want to have with this community that they say they want to build. Then, they need to nurture that relationship and learn from it. While this may require changing some specifics, like writing larger on the board or training someone to reply to Tweets, it is more about establishing relationships that model the kind of of respectful, democratic communication that PCORI hopes will take place within each of its research teams.

Posted by Regina Holliday at 11:03 PM