Break Out Session at AMIA

On Wednesday, December 12, I attended AMIA’s (American Medical Informatics Association) 7th Annual Invitational Policy Meeting: Health Data Use, Stewardship, and Governance: Ongoing Gaps and Challenges.  The meeting began at 7:30 am and I arrived closer to 9:00 am after getting my two sons off to school.

When I arrived the speakers were just finishing up an over-view of AHRQ (Agency for Healthcare Research and Quality) activities.  I joined in the twitter stream and was pleased to see the AMIA handle actively tweeting.  E-Patient Dave was the king of the comments and I was able to get a quick snap-shot of what had happened thus far by reading the stream backwards. 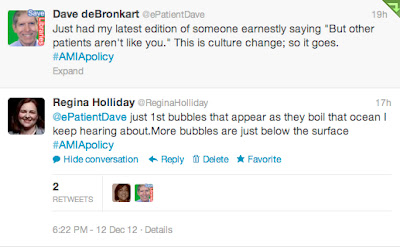 Soon we were told we would go to break out sessions based on the dot color on our nametags.  I knew a couple of the people in my session but fellow gallery members Dave deBronkart, Deven McGraw, Ross Martin and Josh Rubin were in other sessions.

So I began to set up my easel in the Green Dot Room and watch folks look at me with quizzical stares.  Soon people began to file in and take their seats around the U-shaped table.  I began to paint “Break Out Session.” 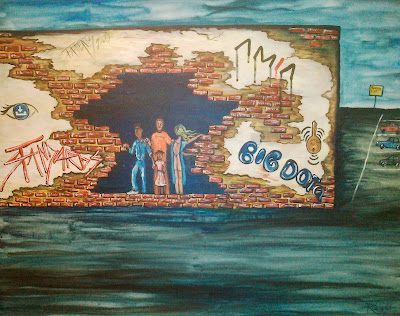 I must admit my painting was affected not just by the dialog in the room but also by prior experience with AMIA.

I was glad to be invited to this event because I had not heard much from AMIA since 2010.  Earlier in this fall I had been asked to attend the AMIA Conference event in Chicago, but I had already made plans to present in Detroit at a TEDx event.  These two invitations were my only interactions with the AMIA organization since presenting at their meeting in Washington, DC in the fall of 2010.

You see I was the patient on the panel at an educational session that year organized by the amazing Lindsey Hoggle.  I was the patient, Ted Eytan was the doctor and Josh Seidman represented the view of the ONC (Office of the National Coordinator of Health Information Technology.)  Our moderator was Rita Kukafka, Associate Professor from Columbia University.

A couple of very important things happened at that meeting.

If you have ever seen me speak, you probably have seen a deck full of paintings.  I think pictures communicate far more deeply than text for many people.  I try to always present with a picture-filled slide deck so my words can be augmented in this way.  But I had been told early on our panel presentation would not be using slide decks.  At some point that changed with me being none the wiser.  When I arrived to speak both Josh and Ted had decks ready to go.

I whispered to Ted that I had no deck.  Ted rapidly pulled up my slideshare account and began downloading a short deck from my past presentations.  While I stood up to present it was just finishing download and it was ready to use by the time I finished my opening remarks.

It is amazing what you can accomplish using technology and working with friends.

The second important thing that happened was we were exposed to an extremely paternal attitude toward patients that was mind-blowing.  Ted, Josh and I found ourselves at odds with our own moderator and a great deal of the crowd.

Sooo… going into this meeting, I must admit a bit of trepidation.  Upon responding to the invitation, I told the organizers I would want to paint on site.  They seemed to not quite understand what that meant, so I wrote a post entitled “Why I Paint on site” as an explanation.

I took part in the morning discussion while painting a brick wall.  Ever heard that phrase beating your head against a brick wall?  At times that is how I felt as my worldview crash against the entrenched philosophy regarding patient engagement that was espoused by many in that room.  I also remembered so many years ago the fears of the brick and mortar bookstores as they saw online sales rapidly encroaching.  I heard a great deal of the same kind of language in this room as I heard at bookstore conferences in the 1990s.

But this was a breakout session so I smashed a hole through the wall.  I shaped the hole like an anvil.  One member of the AMIA team even asked about the hole.  I told her about the anvil shape.  She said, “I am sorry I don’t remember, is the anvil the one you pound with or you pound on?” I responded, “AMIA is the anvil, the one getting pounded.” Right now AMIA is in an anvil time; so many forces in this new world of healthcare are pressing upon it.

That is all the painting I could finish in the first breakout session. When I heard that our report out team would be creating a slide deck, I offered to email pictures that would correspond with their text including the one I was working on.  As it was not finished I added a question mark to the painting. 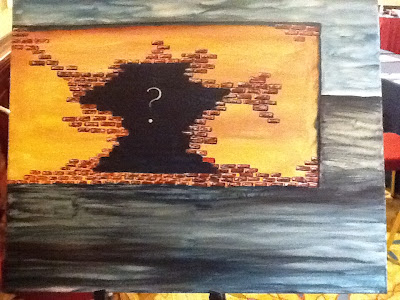 I poured through the photo cache on my iPad and sent 10 emails to Ms Thorpe who was creating the deck.  Then I started getting failure to send messages as her work email considered my images spam.  I told her of the problem, she gave me her personal email.  I repeated the entire process.  I told her when I finished. She responded there would be no time for pictures as they had spent the entire lunch period on text and they would need to present in ten minutes and her computer was not hooked up to WiFi.

I sighed and thought of Ted.

He had done similar work two years ago in less than 5 minutes.  I attend so many venues where organizers ask, “How can we better communicate with patients?” Then presenters create complex text-filled decks that list things like plain language and visuals but don’t actually incorporate them. 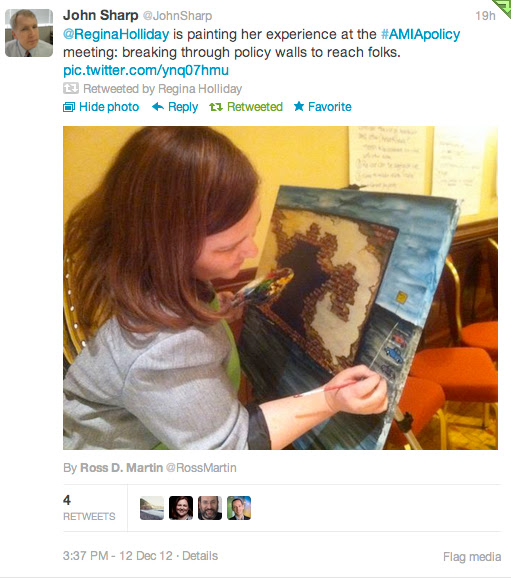 In the afternoon breakout, I continued to paint.  We were talking in this session about a vision of the future in 5-10 years.  I painted a man in the orange uniform of a prisoner with those numbers emblazoned upon his chest, because that was the level of excitement in the room.

I want to talk about 5-10 years out, Exclamation Point!

For patients this could be a great new tomorrow.  A tomorrow with peer review having a new meeting, as in approved by the patients in patient communities like ACOR or Patients Like Me.  A future where Blue Button has been widely adopted and folks are sharing data and utilizing third party apps.  A future where the default assumption is not that patient’s want their data private to the point of personal inaccessibility, but instead an understanding that it is their choice to share that data or not. 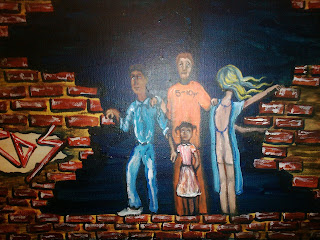 Also in the anvil hole a father and his daughter stand preparing to step through.  A female patient turns her back to the viewer and stares into the abyss.  We are headed to the future, but not equally.  Some will look forward and some will look back.

Around these figures graffiti tags mark the wall.  To the right we see AMIA itself.  This logo with it’s futuristic styling so new that the paint runs down the wall. Below this is a key with a wifi signal free to use and the phrase please copy me. Below that we see Big Data and ponder what that means. 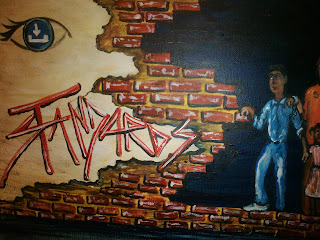 To the far left above the word Patients 2.0 is scrawled upon the bricks for the patients of the future are coming.  Below that the eye in HIT has a blue button for an Iris: the opening that allows us to see.  Finally scrawled below that is the word standards.  Which standard?   I think we have yet to decide.

If you look to the right in the distance there is a parking lot.  This space is for the topics that did not fit within the break out session parameters. I hope that they will get to drive into another discussion.

This morning I was unable to attend day 2 as my eldest son is ill.  Josh Rubin emailed me from the session to tell me that they showed the original picture from session one with the question mark.  They were unsure of the title… 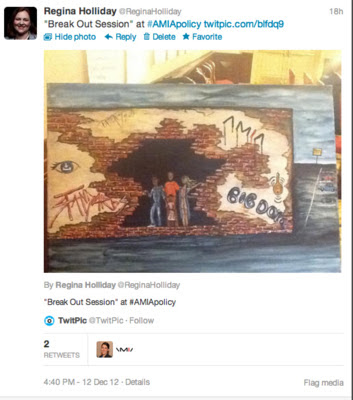 I posted the finished picture yesterday on Twitter when I left a little before 5:00 pm with it’s title, I just don’t think anyone in my session was following the twitter hashtag for #AMIApolicy.  Which is sad because if you want to meet patients were they are, Twitter is a good place to start.
Posted by Regina Holliday at 8:45 AM

Email ThisBlogThis!Share to TwitterShare to FacebookShare to Pinterest
Labels: AMIA