This week is one of my wilder ones and I will wear many hats.

On Monday I worked at the toy store Barstons Child’s Play. I got into several conversations that compared the advances in toy technology to advances in medicine. Throughout the morning, I continued to help people that I have helped for 18 years. The holiday season a Child’s Play can be hectic, but there is a joy to seeing faces that are missed.  For many of our clients are grown now, yet their parents come back at this one time of year.  This is our annual meeting and it is joyful.

But Tuesday came, away went my role as a toy advisor.  I grabbed my brushes and paint and rushed to day one of the ONC (Office of the National Coordinator of Health Information Technology) annual meeting 2012.  When I arrived they had a hard time finding my nametag.  Was I a speaker?  Well, yes but not today.  A stakeholder?  In my opinion a stakeholder is a title for Buffy the Vampire slayer.  Finally they found my tag in the press section of nametags.

This day was a pre-meeting day and sessions focused on various topics.  I arrived late as I also wear a Mom hat and had to get my kids to school.  Since I was late, I could not attend the State HIE morning session it was standing room only.

I walked further down the hall and saw there was plenty of space in the workforce development session.  There I set up my easel and began to paint “Root Certificate.”

In this painting a graduate is walking on the path to her future.  In front of her is a sign: HIT ahead.  She has taken many courses in informatics, but will she find a job?  Many of those on the workforce panel complained about the lack of access to work experience on vender systems for new graduates.  In her hand the graduate holds a hothouse flower.  This poinsettia is lovely but can it survive the environment outside the walls of academia?

Beside the graduate a provider holds a light bulb with a seed inside.  This is a slide reference from a speech by Jon White from AHRQ.  What flowering ideas are we growing?

Soon we broke for lunch and a few brave souls came over to the easel to see what I was painting.  One lady seemed a bit confused, she said, “I thought you were painting this session.” I suppose she was thinking I painted like an artist in court.  I said, “I did paint your session, but I use symbolism and allegory to make a point.”

Next I set up in the State HIE room.  Keith Boone and his teen daughter Abigail came by and asked me to attend the ABBI session later that afternoon.  I said I would love to attend a session focused on the Automating Blue Button Initiative.

After the lunch break people began to stream in the State HIE room.  I had a chance to speak with presenter Brennan O’Banion from the Kentucky HIT Exchange.  I also got a chance to talk briefly with presenter Carol Robinson, Oregon State Coordinator, HIT.  If you have not gotten to meet Carol, you should really make a point of doing so.  She is a firecracker.

Ross Martin was the moderator.  This was his last official responsibility working for Deloitte and he was amazing.  He was also wearing his Walking Gallery jacket that depicted his lovely wife Kym dancing before a background of cancer cells.  A fight she once fought and fights again this day.

As the panel spoke of adoption and the role of HIT, I began to paint the landscape of the acronyms we hear each day.

Soon Abigail can to help me carry supplies to the ABBI meeting.  We walked through corridor after corridor; soon we came to an out of the way room filled with wonderful people.  The CMS innovators were there as was Claudia Williams, Lygeia Ricciardi, Damon Davis, Peter Levin and Farzad Mostashari.  I set up in the back and continued to paint. 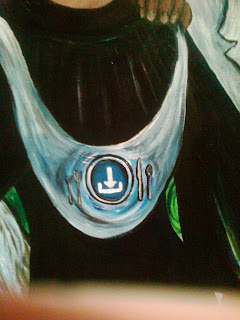 Farzad shared with us the story of his Thanksgiving.  After the meal was finished, Farzad asked his parents if they would like to see their blue button data.  As they were on Medicare, Farzad was able to log on and get the download in its raw form.  Then he remembered the presentation by Bettina Experton about I-Blue Button app by Humetrix.  So he called her on Thanksgiving.  She answered his questions and Farzad used i-Blue Button for his family.  The next day his father’s eye hurt.  They could have gone to ER but Farzad knew full well the chance of seeing an on call ophthalmologist in the ER on the day after Thanksgiving was slim to none.  So they used ZocDoc and were able to get an appointment that morning.  When Farzad’s dad saw the doctor he was able to bring up his medical record on his smart phone because of i-Blue Button.

That was an amazing story and I painted it into the picture on the back of our graduate’s regalia.  There the blue button acts as a dinner plate with a place setting of a knife, fork and spoon.  Prepare to feast upon data.  It could change your life.

Standards and interoperability was also discussed at the ABBI meeting.  So HL7 entered the picture.  Then discussion moved into security and the painting was named “Root certificate.”  Soon a friend of mine named Patrick Grant came to the meeting.   I met Patrick at the Learning Health System Summit in Washington DC back in May.  He is working on creating a patient data access co-op.  He flew all the way from Florida to meet the amazing minds at the ONC meeting. 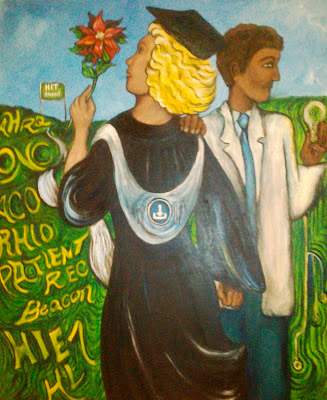 Soon it was time to pack up my paints and brushes and get my son from school.  I was so glad to have a chance to attend the annual meeting.  The folks at the ONC shine hopeful and bright.  They are planting seeds and growing flowers and it is our job to make sure those flowers survive in the often-harsh reality of the healthcare landscape.
Posted by Regina Holliday at 5:19 AM