Time to Leave the Island 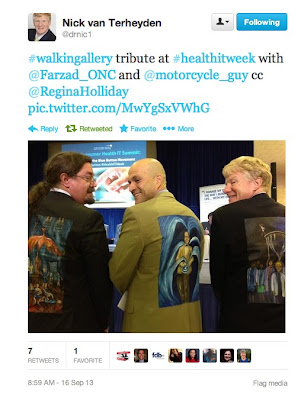 So much has happened and many things have changed in the four years that ONC has worked on Meaningful Use and consumer engagement.  These changes were visually manifest in the fact that half of paintings in the room were worn on the backs of jackets rather than hung on the walls of these hallowed halls.

Members of the Walking Gallery showed up in large numbers! Keith Boone, Casey Quinlan, Don Fluckinger, Matthew Holt, Donna Cryer, Mary Anne Sterling and Nick van Terheyden were some of those who walked wearing their powerful stories on their backs.  It also made my heart glad to see so many past and present federal employees wearing their jackets at an event at HHS.  Todd Park, Lygeia Ricciardi, Joshua Seidman, Peter L. Levin and Farzad Mostashari all wore their jackets while talking about the future of medicine and technology.

It was a lovely day because I designed the gallery so this kind of visual storytelling could become part and parcel of any health policy dialog. In the past, Individuals have questioned my decision to paint 236 jacket paintings basically for free.  I responded to them saying I designed The Walking Gallery this way so even federal employees could tell their stories.  The gallery accepts all who wish to walk, the gallery jackets have no monetary value and the walker wears them to at least three events of their choice per year.  All of these rules were designed to allow reporters, providers, patients and federal employees to be part of this movement toward truly humane healthcare.

I asked Farzad if he would join us in the gallery several times before he acquiesced last year.  Farzad is an amazing leader in healthcare and would not do anything that would be considered out of bounds in his role as a federal leader.  I assured him that I designed the Gallery so men and women such as him could join.  (I even had an opportunity to talk the ethics lawyers at HHS and they assured me I designed The Gallery in such a way that federal employees could participate.) Last year at a similar consumer meeting Farzad removed the jacket from his back and I painted it on the spot.

This is Farzad’s jacket: “The Three Stages of Meaningful Use.” 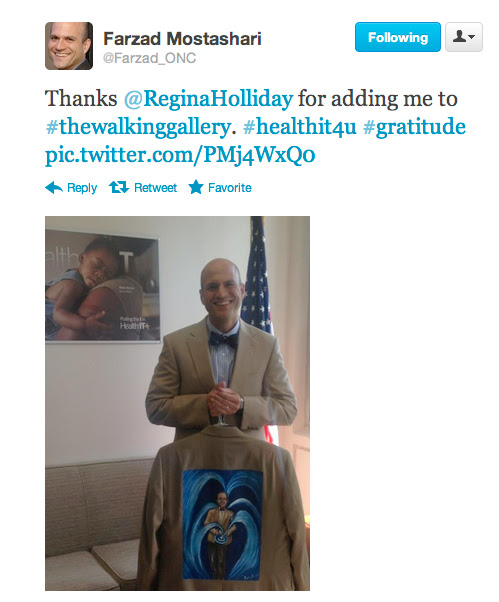 In this painting, Farzad stands wearing his famous bow tie with a smile on his face as three waves shaped like the letter “M” descend upon him.  This represents his life’s work at ONC and his guidance of the implementation of a truly “Meaningful” Use.  In his hands he hold’s a blue button in a pose of reverence.  Last winter Farzad shared with us the story of his Thanksgiving.  After the meal was finished, Farzad asked his parents if they would like to see their blue button data.  As they were on Medicare, Farzad was able to log on and get the download in its raw form.  Then he remembered the presentation by Bettina Experton about I-Blue Button app by Humetrix.  So he called her on Thanksgiving.  She answered his questions and Farzad used i-Blue Button for his family.  The next day his father’s eye hurt.  They could have gone to ER but Farzad knew full well the chance of seeing an on call ophthalmologist in the ER on the day after Thanksgiving was slim to none.  So they used ZocDoc and were able to get an appointment that morning.  When Farzad’s dad saw the doctor he was able to bring up his medical record on his smart phone because of i-Blue Button. 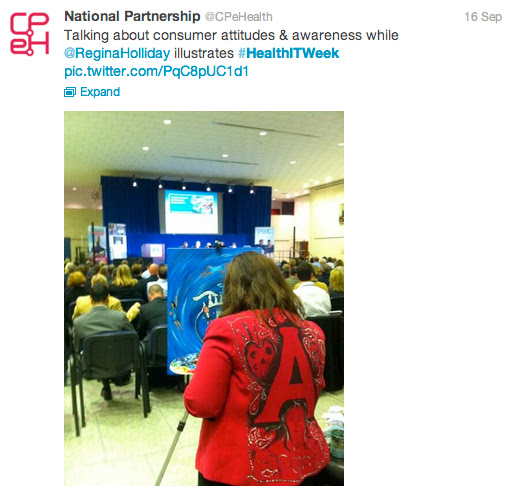 This week at this consumer event Farzad gave us his last words of wisdom as he prepares to leave office.  He told us we were the misfits.  We were the ones who were early adopters or rode our bikes to work in a city of automobiles.  We would have to spread the vision of HIT and consumer empowerment to the wider world.

So I began to paint “Time to Leave the Island.” 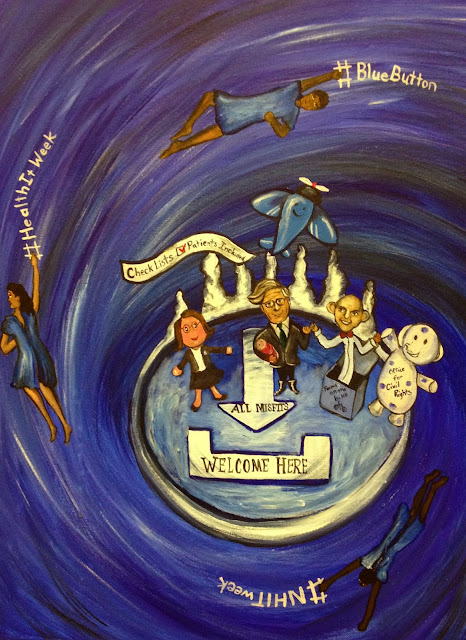 In this painting a Blue Button doubles as the Island of Misfit Toys from the classic stop motion animation Rudolph the Red-nosed Reindeer.  The Text “All Misfits Welcome Here” is inscribed upon the button.  Farzad springs “out of the box” and fist bumps with Leon Rodrigeuz (as a polka dot elephant from OCR, Office for Civil Rights).  Leon told the crowd about the support OCR would provide in helping patients access their records and re-affirmed the OCR’s stance that data withholding from patients is just as bad as illegal disclosure.

To Farzad’s left in the painting is and elf version of e-Patient Dave holding his granddaughter.  Dave treated us to a fast-paced speech that encapsulated all of the strides in the participatory medicine movement these past four years. He ended on that most important note; getting to live, getting to hold this child was why we do what we do.   To Dave’s left a doll version of Lygiea stands with a smile on her face and a Blue Button on her lapel as she helps patients enter the ongoing dialog. 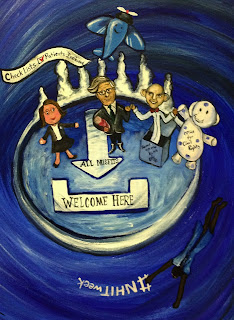 Above the island flies the plane that could not fly, now bedecked with a streamer saying “Checklists Patients Included.” The alludes to both Atul Gawande’s campaign in the wider world of health to embrace the use of checklists and Lucien Engelen’s campaign to improve patient inclusion in medical conferences.

Around the island patients fly or swim propelled speedily along with hashtags on twitter. They are spreading the messages from this day around the world.

I finished the painting as Farzad closed the day.   I take his advice to heart.  We misfits need to fly into the world of business, research and pop culture.  We need to open minds and hearts.  I know so many of us will miss Farzad heading ONC, but I for one can’t wait to see what he does beyond the island.
Posted by Regina Holliday at 2:00 PM