Hello, we are going to talk about your goals today. My name is Regina Holliday and I have years of experience working on procedures such as this one. I may be a professional in this field, but I deeply value your insight and vision as a positive outcome depends on your ownership of the task. I came to speak to you about your ideas. What do you want during this process? Is there a certain concept that excites you? What do you bring to the table?
Does that sound like the words of Participatory Medicine? Well, in this case it is participatory art. For the past two years I have been going into classrooms in Washington DC and talking to the students about what would they want to do for their class auction project.
This was a rather disruptive concept.
I got the idea to do this from two different sources. I was inspired by the give and take relationship in the Responsive Classroom movement and the Participatory Medicine philosophy of the e-Patient.
When I first began asking children what they would like to create, I was told by many teachers and parents that children needed to be told what to do. I was told that they were not educated enough or that they were too wild and flighty and their ideas would have no merit. It would be better if the teacher and parents just spoke amongst themselves and then just made the children paint.
For many years I went along with this model. I would go in a class and we would do the picture we were told to create. Then I saw the joy of students in a responsive classroom model, and I felt the auction art method must change.
So now I go into a class and we discuss the pros and cons of each project. We talk ROI (Return on Investment) and we speak of history and art while the children decide what they would like to create. It is an amazing process and because the children own the concept they are excited, engaged and empowered. I was honored to help create 20 projects using this method at CCBC Preschool and Murch Elementary this winter and I am overjoyed with the results.
4th grade
In Asha Mathur’s fourth grade class, the students were brimming with ideas. We had an in depth brain storming session. And the children decided they wanted to do a two-sided piece. On the face side the students created a silhouette of the school with trees and students. It is the “Murch of the Now” and is held within a physical structure of the school. In the shadow box side, the students created their version of “Murch of the Future.” I find the “Murch of the Future” amazing, as it has no physical building that is defined as “school.” Opportunities to learn are everywhere. These 4th graders have grasped a concept that many of the elders do not comprehend. In a cloud-based learning system, the sky is the limit. 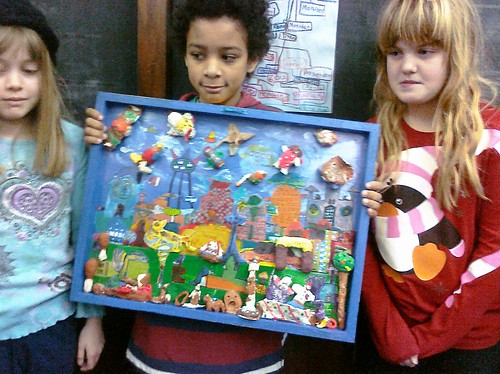 While creating this sparkling future vision, one child piped up with a question. “If we are creating a picture of the future should we be painting trash and pollution?” I responded, “It is your choice. You can create a sparking future or one filled with waste. You are the young. You are the future. And the painting you create will help define the future that you live in.”
While saying those words, I went over to the chalkboard. I began to draw a series of upstroke lines culminating in a puffy rounded-shape. I asked the children what I had drawn, they responded, “A tree!” I said no, “That is a mushroom cloud. And when I was a child that was an image that everyone understood and it was a possible future. But you see a tree, and that is beautiful. That is the future you see.”
Mr. Paterson’s 4th grade class was inspired to paint image after image of Stickman on their own fantastical safety signs. You know stickman he shows up as a common pictograph human telling you where and when to walk, which floors are slippery and which restroom is the appropriate choice depending on your gender. I was so excited to see their creative uses of such ubiquitous image. Not long after working with these creative students, I had the opportunity to speak with a QIO (Quality Improvement Organization) and the CEO's at a hospital. I told them about the immense power of the simple patient safety sign. The patients are watching, the children are watching. If we place simple images in the corridors of medical institutions, the visual message will be understood and acted upon. Thank you Mr. Patterson’s class for focusing on this important topic in our society. 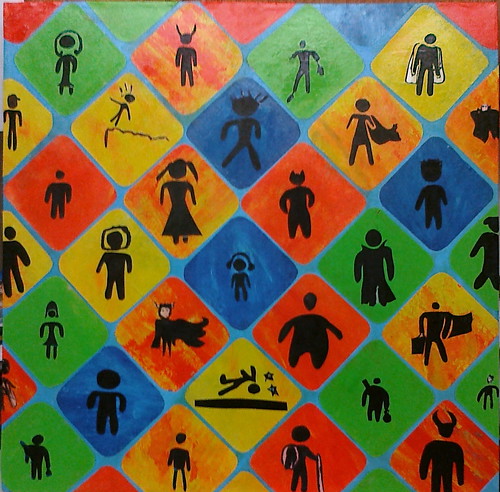 Ms. Finberg’s class had already begun their project of decorating two birdhouses, but I helped them the painting aspect. Children painted a photo of their likeness on two birdhouses created by a Boy-scout troop. It was a wonderful example of re-cycling and using objects in new ways. 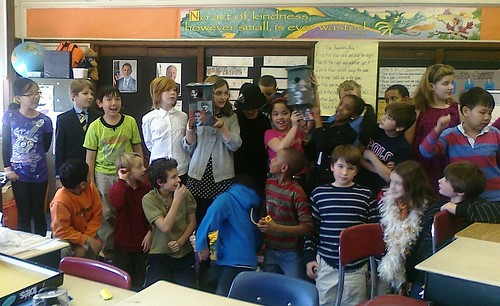 3rd Grade
Ms. Hsu class decided to paint about Literature. The Painting “Flying Books” depicted the way your mind can soar when you have the ability to read. The children could focus on a specific character or book within their picture. I was amazed that most students were creating books without titles. They were depicting the power of literature and story to change lives and open minds and knew that topic to be too large to be constrained within one title. 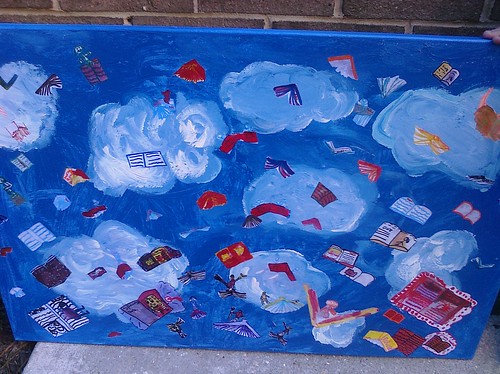 Mrs. Friedman’s class seemed exuberant, yet, fractured in their vision when I came to speak with them. They wanted to speak about places and themes of babies and memes. As I poured over the images they captured, I wondered at what they had created. This was not typical auction art. I realized the concept throughout was Internet memes. They were especially focused on the use of baby images throughout viral advertising. I think this piece is one of the most edgy auction art pieces I have seen. These children are thinking. They are making a statement. In their depicting image after image of babies selling products, how can that not be a statement on auction art itself? Hmmm… Thank you for your message. I take it directly to heart. And thank you Orly Friedman, you are teaching children to ask some very important questions. 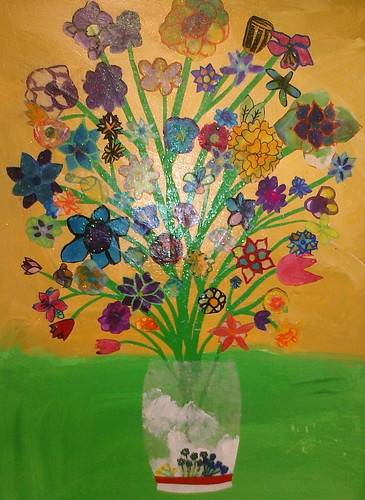 2nd Grade
Ms. Maravi’s class wanted to create an elaborate and multilayered approach to a forest scene. The students created their own Robert Frost inspired poems. Then they painted birch trees that incorporated the poetry. They also created crawling bugs and flying insects that completed the scene. I love that these piece when seen from a distance, seems so simple. When you are up close the poetry becomes apparent. Recently, I gave a speech about health and decided to close with a poem I had written. Another speaker, came up to me afterwards and told me had inwardly groaned at my words. Not a poem, he thought. He had succumbed to a belief that an original poem by an amateur is painful to listen to and adds nothing to the presentation. He admitted he was wrong. Thank you students in Ms. Maravi’s class you get the power of poetry.

In Ms. Schafer’s class they were concerned about the environment and decided to depict a rain forest scene. The children created brightly painted animals and insects within a forest of the brightest green. It was such a pleasure to work with Ms. Schafer again. She had been my son Freddie’s second grade teacher. She is an amazing advocate for her students. In April of 2009, I had last worked with her. Fred was so sick, and I finished assembling her class project at Fred’s bedside. It was so good to work with her again and to do so with a happier heart 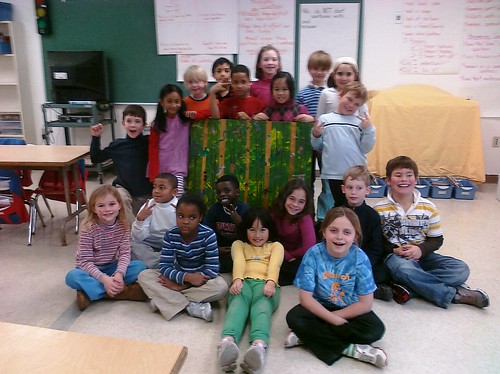 1st grade
Ms. Werner’s class wanted to work in a variety of mediums and concepts and I came into their process when it was well underway. The wanted silhouettes, quotes, and drawings. We combined all three by creating a rainbow of possibilities. The entire class combined all of these concepts into a free-spirited vision of themselves. 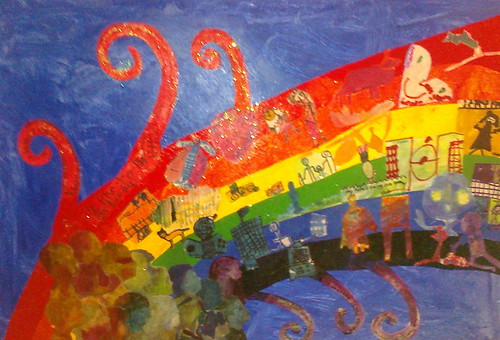 Kindergarten
A Warhol portrait piece was the inspiration for the class project of Ms. Bogan’s class. Using the bright colors of the sixties pop art movement, they painted photographic self-portraits. 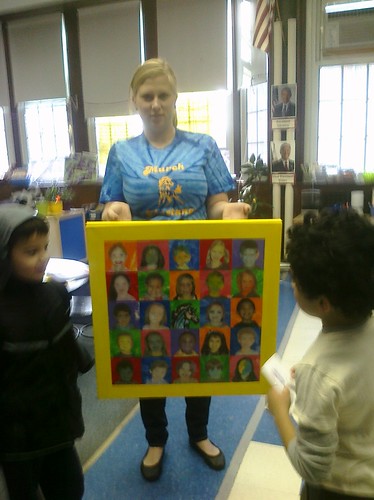 Pre-K
Ms. Emily Stewart’s pre-k class is quite active. My son Isaac is one of the student’s in this class, so he was very excited when I appeared to discuss their auction art. We discussed many options that the class could work on. They could paint a DC landscape or perhaps an underwater fish scene. They decided they would like to paint themselves as cowboys. So, each child created a painted faux tintype. These images were then combined to make a wall covered with old wanted posters. It is a great piece and I would not have thought of it in million years. There is an amazing result that occurs when you are willing to listen to children or patients
. 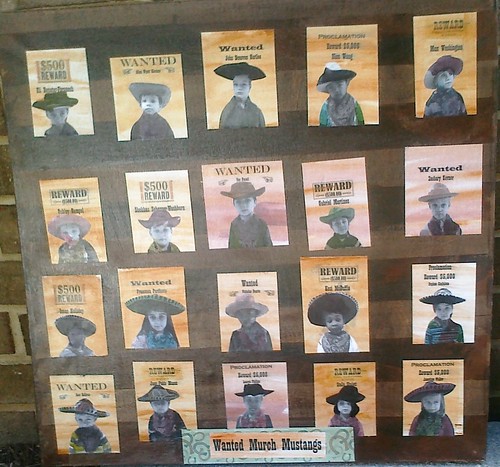 Later this week, I will go back and work on one more project. In the frantic effort to create the auction art and follow many email threads, one class had been left behind. Murch has a dedicated Autism classroom. The three students in that class had not been asked what they would like to create. On Friday, I went in and asked them. They will be painting a piece about food, animals and music. It should be amazing.
That is the power of art. It can give a chance to use your voice and that is Participatory.
Posted by Regina Holliday at 11:00 AM