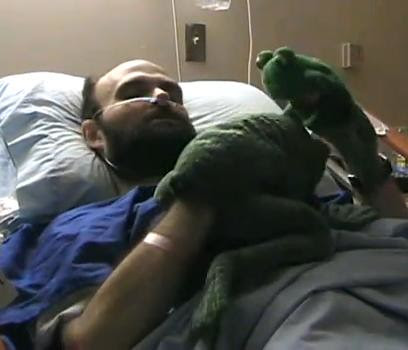 If reality has not taught us, then we can rely on fiction to do the job. Fred always loved to quote a line from Grand Canyon. “That’s part of your problem, you haven’t seen enough movies. All of life’s riddles are answered in the movies.” –Davis (Steve Martin) I couldn’t agree more.

I knew I was inspired to advocate for Fred in a hospital by watching performances by Shirley Maclaine and Sally Field. Who can forget Terms of Endearment or Steel Magnolias? Shirley’s character advises every e-patients as she cries out, ”It’s past ten. My daughter is in pain. I don’t understand why she has to have this pain. All she has to do is hold out until ten, and IT’S PAST TEN! My daughter is in pain, can’t you understand that! GIVE MY DAUGHTER THE SHOT.”

Did you know Fred Holliday, PhD. was a puppeteer?

When he was in school many years ago he was under the direction of the Puppet Master Gerald Snelson. Fred was part of traveling puppet show that would visit the local schools. Professor Snelson gave us what was one of our most treasured wedding gifts. He gave us the entire puppet set from his production of Brave Little Tailor. These are not small hand puppets. Think Jim Henson style puppets. They are amazing.

Those Puppets helped us through the years. When we were still newlyweds we persuaded a few friends to entertain the crowds at Grantsville Days festivities using these puppets in a show of our creation.

When our son Freddie was only 4 years old he was invited to a birthday of his good friend Jack Taylor. Two days before the party I received a distress call from Jack’s mother Theresa Taylor. Her party entertainer had cancelled. Could I help? I had to work at the toy store. I couldn’t help, but Fred could. Fred resurrected the puppets once again and off he went to present a one man puppet show before a room of active little boys. He was a hit.

For many years the puppets stayed in our closet as we worked many hours at many jobs. Then in spring of 2008, our family was at a crossroad. Fred was very tired and stressed. He felt he could no longer work long hours as an adjunct professor and video clerk. I was also very tired of working long hours away from him and the boys. So we came up with a plan. Two things could happen. In the fall of 2008, Fred could get a fulltime position at a University or we would take the puppets out and become a Birthday Party entertainment team. I would do the art projects with children and Fred would do puppet shows. In honor of this plan, I gave Fred a Frog puppet for his 38th Birthday.

Fred was very proud of his new puppet. It sat upon the desk as a promise that life would get better. That summer the crossroad was reached and a future chosen. Fred was hired at American University. The Frog puppet was put away, as we went down a different path.

In the spring of 2009, Fred became very ill. While hospitalized he discussed with me how he would like to say good-bye to our boys. He would do it with puppets.

The Frog puppet would get only one performance. Fred had intended to do several puppet stories, but he was so sick in hospice and time ran out. So there is only one good-bye. Fred was an amazing puppeteer; he could make you believe his hand was a puppet. But I am glad he had this chance to use the Frog… to walk the other path for a few minutes. I am glad I can share with you and my boys his last performance.

Posted by Regina Holliday at 7:33 PM