There are some brave people in this country who invite me to attend their conferences and meetings. They invite me to speak while not knowing which things I will say. They invite me to paint while unsure of what the final image will be. They know that when a patient or caregiver comes to the table the paradigm will change. And for many people, change is very scary.

Before coming to Bellin Health, I had a conference call to discuss the upcoming event. We talked briefly about what I would paint. I explained that I paint the things that I see and hear and that can result in good images or negative images based on the words and the culture I am depicting. I could feel hesitation on the telephone line. The folks at Bellin wondered what kind of picture they would get. Would it be bright? Would it be happy? I told them, my paintings reflect the words you say channeled through an artist’s eyes. If you want a bright painting you just need to be true and genuine, I only paint the things I see and hear. There was a moment’s pause. They agreed to my onsite painting, believing their culture would show as brightly as the sun. And it did.

This is Quilting Bee. The day I arrived at Bellin Health I was able to tour an allergy and asthma clinic that installed an Epic EMR system 10 business days before. I got to be privy to their last onsite meeting with the Bellin Epic installation team working in concert with the clinic staff. I often get to sit around a table and talk data and tech, but this was the first time I did that with only women present. As Anne Hale and I left the building I remarked how much the dedicated women around that table reminded me of a quilting bee.

You have probably heard the word bee used this way before. It was once very common to unite a community in a common task to help each other. There were barn-raising bees, spinning bees, quilting bees and spelling bees. 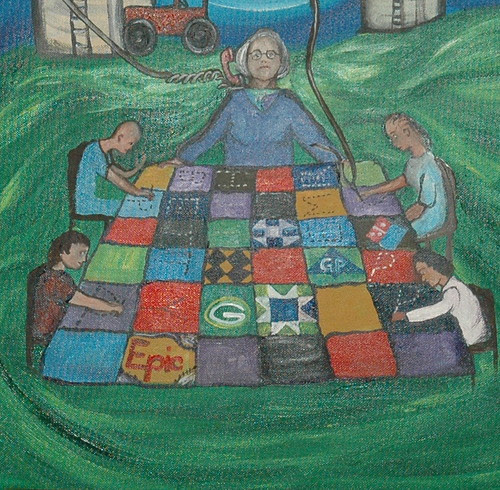 The quilters in this painting are patients, informatics professionals and doctors. They are stitching P for patient into the blocks. One patient looks in wonder at her painted nails. This image is referring to a story one of the IHI fellows told us. A young girl was asked what was the best thing that had happened while she was in the hospital. She answered, "The day they came in and painted my nails."

Some blocks are quilted with the with the letters for HIT, BETTY and EMR, because that is what these quilters are building. Other blocks refer back to the slave quilt code used during the civil war. One block is a shoe-fly representing the message that this is the one you should follow. One block is the cross roads representing this is a point of decision upon the path. Another block is the North Star that points the way to freedom. These blocks create a message to patients: this is a safe place.

Other blocks in the quilt represent the companies that Bellin Health works with such as EPIC, The Green Bay Packers and Georgia Pacific. The square depicting the logo for Dominoes Pizza is actually alluding to their old 30 minutes or it’s free campaign. This refers to a speech given by one of the IHI fellows who mentioned that ambulances in the UK were so determined to get a patient delivered in the “right” amount of minutes, often did not deliver them to the most appropriate destination. Dominoes Pizza changed their policy because of the negative public perception of driver collisions due to the time constraints. People were injured or dying because time limit for a pizza delivery. Imagine giving up your entire motto and branding campaign, to save a life. That was the choice that Dominoes faced and it sounds like it is one the NHS is facing as well.

The matriarch at the head of the quilt is Betty Bundy. She is a stroke survivor and the face of the new Epic EMR rollout at Bellin Health. The yoke of her shirt is the IHI triple aim. It is displayed upside down. When Betty was seen at Bellin no one connected the dots in her care. Later, when the stroke team began to get feedback about her experience it allowed healing to begin. 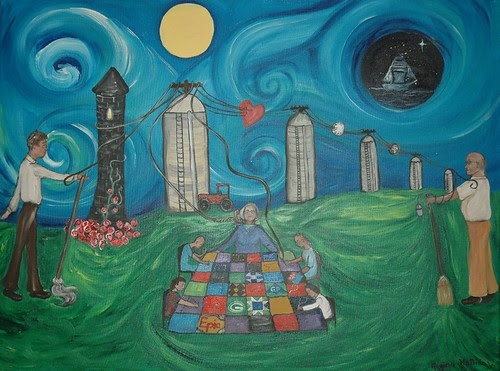 The center of this painting is framed by two figures. On the right side of this painting stands Everett Davis. As the conference day began I learned about Everett Davis. He worked at Bellin for 44 years. He would sweep out the stairs and everyday he would say, “Have a Good Day, My Friend.” He died on September 2, 2010. In lieu of flowers a memorial fund was created at Bellin. So, in this piece he holds his broom. On the left side, wearing clothes from the 1970’s, stands the Bellin Health CEO George Kerwin. In 1971, he started at Bellin as the head of housekeeping. He is facing Everett with a mop in hand. Both figures stand at the same level looking eye to eye across an expansive plain.

Above and behind these two figures are a series of connected silos. I often hear at HIT events about the need to “tear down silos.” The Oklahoma gal in me is quite upset. We don’t want to tear down silos. Silos are important. They store grain before transport. We need to connect the silos. So, out of each of these silos a telephone pole rises above and transmits data.

The wires themselves suspend and pierce three items and wrap around the figures in the scene. One item is a heart. It represents the love we feel for families and heartache we feel watching patients suffer in pain. Next is a clock. Ann Hale mentioned in her speech that as we bring patients into councils and work groups it is very important that we respect their time.

Finally, there is the compass that alludes to the North Star above it. During the afternoon session Linda Roethle and Randy Ronsman spoke about the new partnership between Bellin Health and NorthStar. The NorthStar group spent a year looking at options and navigating the waters of care and decided a partnership with Bellin would help patients in both geographic regions.

The wires then extend out and connect George Kerwin and Everett Davis. One coils down to Betty Bundy and allows her to communicate by phone with the Bellin Health stroke team. The final wire becomes the thread that allows the quilt to be to be connected in the health information exchange. 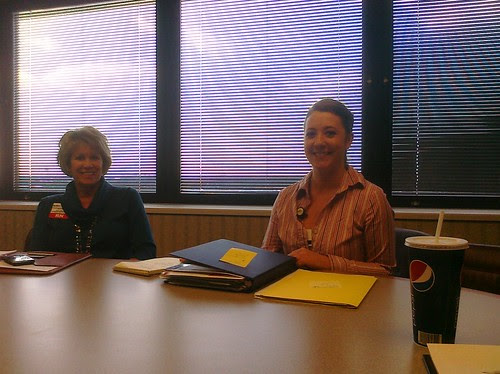 As she described the mosaic work the patients and family members have created as they work their way through recovery, healing or grief, I thought of Fred. I thought of the window stickers we had made with him to adorn the windows of his room. The light shown through those stickers as if they were stained glass, they helped make a clinical room sacred. We had painted things that would make Fred happy. Fred was a huge Stephen King fan and his favorite tale was the Dark Tower. 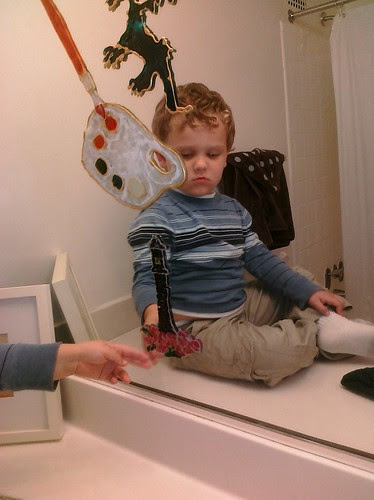 This sticker was put in his window in hospice and stood for our unending love and reminded us both that no matter how bad things seem as it is written in the Dark Tower, “All things serve the Beam.”

Thank you Bellin Health for inviting me to Green Bay, Wisconsin. I will spread your tale far and wide. Everything happens for a reason. And Stephen King was right, all things do indeed serve the Beam.

Posted by Regina Holliday at 7:07 PM