The Power of Naming Names

What is Bellin Health? That question was asked of me last night as I ate dinner with my friends and fellow members of The Society for Participatory Medicine. I was sitting at a table of people very dedicated to the concept of patient centered care and the e-patient movement. Ted Eytan, MD from Kaiser Permanente, Susannah Fox from Pew Research Center, Danny Sands, MD with Cisco Systems, and Christine Kraft from Perfect Sense Digital all looked at me as I explained my visit to Green Bay, Wisconsin to meet with a hospital system so dedicated to patient-centered care that it named their roll-out of a new EPIC EMR system after a patient.

I tried to paint a picture of words describing what I saw at Bellin Health during their Strategy Day Away on March 11, 2011. I knew my language was not enough to describe the experience. So I am very glad I also painted a picture while at Bellin.

If you Google Bellin Health you will find it described as an “Integrated healthcare delivery system consisting of primary care clinics, hospital services, and mental health care. Located in Green Bay, Wisconsin.” If you click upon that link you will see this picture: 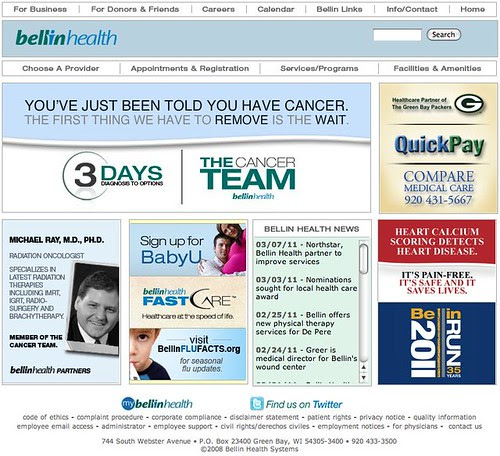 It is a nice screen shot, but it does not capture Bellin Health.

And if you research further, you may find out their CEO is George Kerwin, and he has been their president since 1992, and he joined the organization back in 1971. But you will not know that this gentle and gracious executive meets guests in his office around an unassuming round table, not a large cherry desk. Nor will you find that George Kerwin was one of the forces behind the Bellin Run, a timed race that has become one of the top 10 largest 10k races in the nation. Nor indeed, will you find that when George began at Bellin, he was in charge of housekeeping.

If you search even further, you may even find the name Betty mentioned. And here is where things get very interesting. You see, Bellin Health has these Strategy Day events a few times a year, and unlike some organizations that view such days as a break from the daily grind, Bellin uses them to determine how well they have served their patients. This process led them to someone very special. 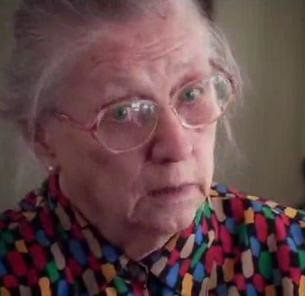 Bellin Health wants you to know about a patient named Betty Bundy, a wife, mother, grandmother and great grandmother. On Christmas of 2005, Betty Bundy fell. A few months later, she realized that she had lost her sense of balance and went to her doctor. A MRI was ordered, and the results determined Betty had had a stroke. In 2009, she had an extreme feeling of vertigo. The decision was made that she needed to go to the ER. The hospital treated her the same as they had three years before. They gave her multiple tests and could not find anything wrong, and they sent her home on a Saturday. Within an hour she was back, having almost collapsed trying to go home. Upon her return to the ER she was back to square one with a new doctor and staff. There was no coordination of care between the two visits. The entire protocol began again. She was sent home again on Sunday. On Monday she called her primary care doctor and was told to come in, and by this time she could not walk. She managed to make it to the doctor’s office. He took one look at her and said she needed to be in the hospital. She was transported by ambulance and had a heart attack on the way.

As Betty puts it, “I was inadequately treated. One should not have to fight and go through that type of crap to get into a hospital. When I came back and was having the same symptoms, only intensified, somewhere along the line someone should have looked and said, ‘uh-oh, we better go a little bit farther than we’ve gone. We better not go in the same route.’ My whole history was available if they had bothered to look or to ask. I think a central repository of patient history is vital. Those personnel that I do see on a systematic basis need to know that I have these other people working with and on me. It’s got to be a teamwork affair. So when you centralize that, when that information is available, it doesn’t really take all that much time to determine who this person is medically.”

What makes Betty’s story even more interesting is how Bellin Health discovered her. You see, Bellin Health has an award-winning stroke program. By the all the traditional measures of care, Bellin Health was providing excellent service, but they wanted to know how their patients felt six months or a year later. When the staff decided to follow up with several patients after a Strategy Day Away, they found Betty. And she gave them an earful. Now, many hospitals would have turned a deaf ear or blind eye to her complaints. Not Bellin Health. They asked her to join their patient advisory group for the stroke program.

She had so much to say and add to the conversation that they were inspired to ask her if she would be the face of a new electronic medical system at their facilities. They met it literally. They used her stylized visage on a logo for the installation of the new record system and called it Betty. At other hospitals I often hear disparaging references to new system implementation. It is the new “big monster.” It is the reason for frustration and work flow disruption. It is hard to hate an EMR named Betty. As the staff says this name, they are being reminded. This is being done to create better patient centered care. This is Betty’s story; this is the patient’s story.

They did not stop there. As they have been working through the installation, they have been including patients in their meetings about the entire process. I had the pleasure of viewing such a meeting as Team Leader, Anne Hale, took me on a tour on March 10. 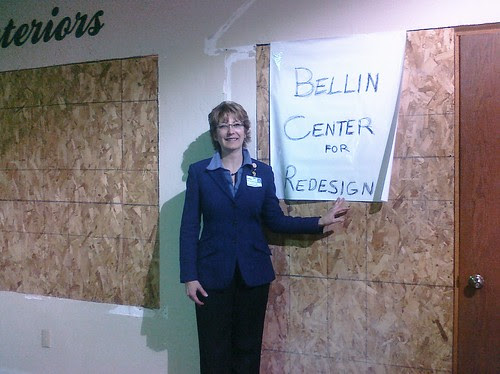 The organization had procured an old retail store in a local shopping mall. In the empty sales space a large crowd had gathered and was working through workflow set after workflow set. The room was filled with all the different staff of the hospital from data techs to nurses to patients. 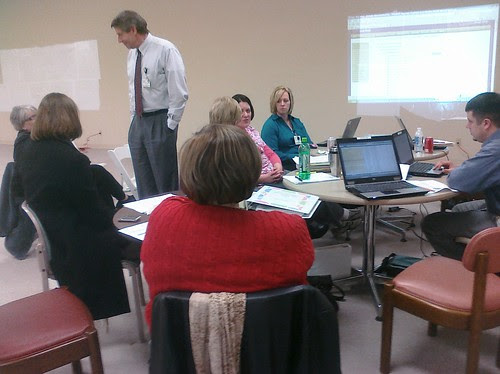 The space was filled with dedication, energy and freshly baked cookies. These folks had learned something that Ted Eytan and I tried to impart at a recent health care round table in DC. In order to think outside the box, sometimes you must remove the box. Whether you sit in a circle in the Hall of States building in DC or in a huddle in low-tech empty store in Green Bay, the informal friendliness is real life. When we talk health, we are talking about applying it to real life situations. 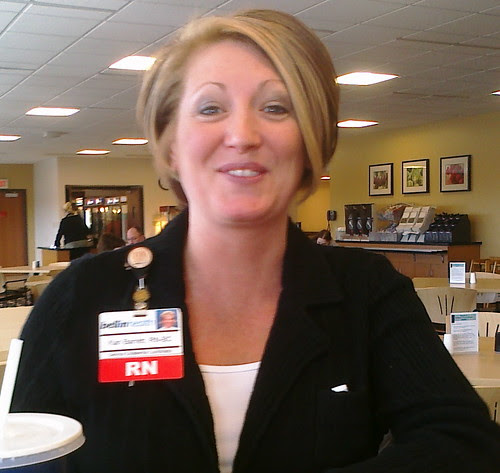 I also met with the amazing Kari Barrett, RN, who is involved in Patient and Family Participation and Femi Cole in Communications. We had a great conversation about the power of nametags. I mentioned my painting The Onion and the Orchid. 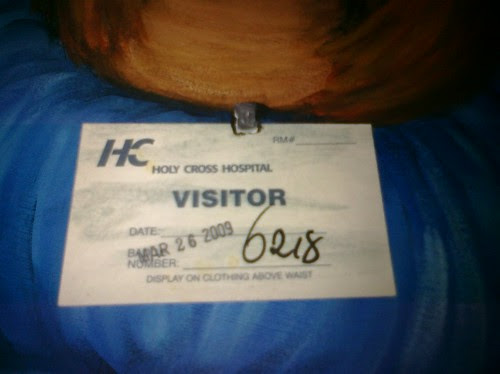 I mentioned that I include speaker’s nametags into my paintings as they let me reclaim my name -Regina Holliday. I also shared information about the wonderful nametags they print at LeBonheur Children’s Hospital in Memphis, Tennessee. They print your name and face on those tags, thereby showing a concern for security and respect. I am very proud of my LeBonheur nametag. 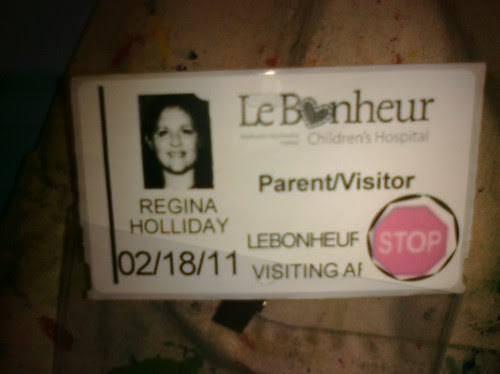 As our conversation continued, Kari shared that even the members of their patient advisors have nametags that are as professional as the staff tags. At that point, I shared one of my greatest concerns with institutional hospital nametags for staff. I call it “nametag flip.” It is the accidental or purposeful flip of the tag so that the patient cannot view the name of the provider. It drives me crazy. There is an easy fix for this. Even the folks at conferences like Health 2.0 know to make the tag double sided so the name always faces out. Femi mentioned it might be one-sided because of a magnetic strip or perhaps it was cost prohibitive. 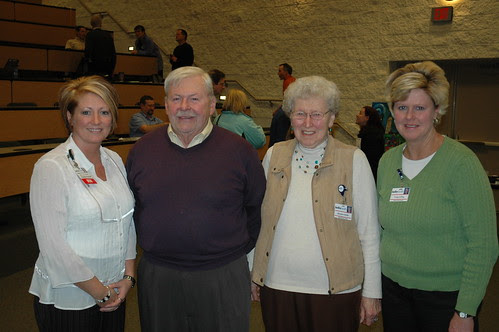 Then Kari mentioned it could be done as it already was done. Every patient advisor’s tag was double sided, so no matter where they went or if their tag flipped you always knew who they were and that they were patients or family.

I had so many wonderful conversations and saw so many great things at Bellin, but I was there to paint and speak. So on the morning of March 11, I began to paint the words that I had heard spoken at Bellin Health, and those words became the painting Quilting Bee. 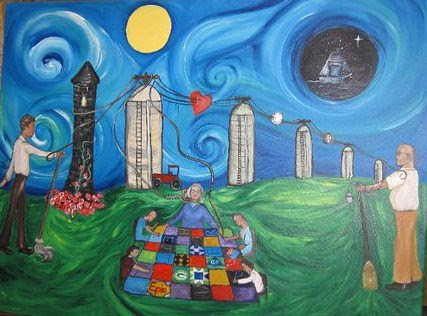 And as we already at 1,500 words… the explanation of that piece shall be a post for another day.

Posted by Regina Holliday at 8:28 PM