It's No Laughing Matter 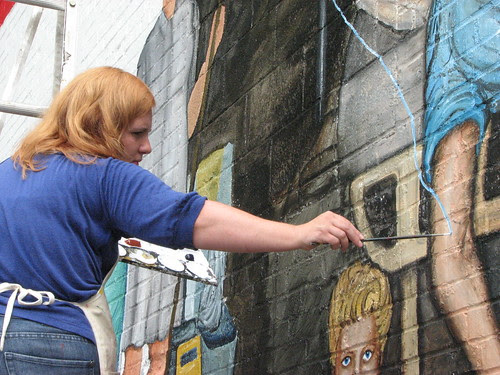 When I was a child, I knew sweat and thirst.

In Oklahoma, a summer day would often be 100 degrees in the shade. My sister, my brother and I would work for hours in the blistering heat, We would work either out in the vegetable garden or in my father’s flea-market stall. We were dressed for the heat. We wore long-sleeved cotton shirts, wide brimmed hats and work gloves. I would sweat so much that when I went inside for lunch the oil and sweat from my face could double as a soap for my hands. This was a good thing as the restroom at the flea-market often did not have soap to wash one’s hands.

I was probably eight years old when I begged for water one day. My Father said I was just goofing off and told me to get back to work. I told him I felt shaky and dizzy. He threw me the garden hose. I did not want to drink that water. The water rushed out warm and musty from the hose. It tasted horrid, but I drank it. I was so thirsty.

Life was very hard and we worked all day. But at night’s my sister and brother and I would often play games. We would play checkers, Monopoly or Operation. I really liked Operation. I did not play by the rules. I rarely used the cards or gathered money. I just liked to see if I could “operate” without causing the little man to buzz. Here too, I would perspire, but this was nervous sweat. I was trying so hard to succeed. I did not want injure my little pasteboard patient with his open metal wounds.

I had not thought of those long ago thirsty days for many years, until I painted 73 Cents. Washington, DC temperature does not reach the highs of my Oklahoma youth, but it does get hot in July and August. One day I was painting on my high ladder 20 feet off the ground with no breeze and a temperature of 96 degrees. I began to feel shaky and dizzy, but I had to paint. There was no time to stop. I painted on, becoming ever weaker. I was interrupted in my painting by a voice below. “Hey Miss!” A lady called. “Hey, Miss! I brought you some Gatorade. It is much too hot today to paint without a drink.” I climbed down carefully, my hands shaking as I descended. I smiled and thanked this stranger who was so kind. I chugged down the beverage and felt energy return to me so I could complete my task. I thanked her once again, and she handed me another Gatorade. “Here is another one, if you keep painting you are going to need it.” After saying that she turned and walked away. I was so thankful as I returned to my painting vigil.

A few days ago I read a post on the IHI Patient Activists Facebook Page. Every Patient Matters posted “Doctor humor at its best - sad, eh?” The post was from http://www.funnysurgerystories.com/model/full-story/id/50

And it stated “Be Careful What You Ask For?

One of our scrub techs who was known to be overly needy called out for a Gatorade to be brought in. Since he just returned to his case from eating dinner my nurse and I was not too worried about his need and decided to keep enjoying our time off our feet for a bit before getting his request.

After 10 minutes the request came again. So now we were on the prowl as to how to shut him up. Sitting on the table in front of us was a bottle of Tabasco. We got some yellow Gatorade and a cup of ice.

After mixing his drink to look more like orange gator aid we brought it to the room with a straw and gave it to the nurse. They happened to be doing a surgery that required a lot of concentration at that point so the room was really quiet. The nurse placed the straw in his mouth and he sucked down three big gulps.

His face went bright red with sweat popping out on his forehead. I ran from the room to release my laughter along with my nurse who was watching through the window. The look on his face was priceless as he couldn't say a word and had to "suck it up" during the case. He never asked for another thing from us again. FSS 3/4/11”

This made me so sad. When I needed a drink as a child my father showed as much care as these co-workers. Perhaps I seemed needy, and I was. I am glad as an adult, a complete stranger was willing to go out of their way to help me.

After reading this post on the IHI page. I dug out an old operation game, and I read those cards. Those cards I always ignored as a child. Do you know what one said? “It is no laughing matter, till you yank out the funny bone- $800.

I am glad even as a child I knew to focus on the right thing. The hundreds of dollars and cards with their jokes about surgery were not important things. The important thing was my patient and I would do everything I could to prevent the alarm’s sound during my surgery, even if it was just a game. 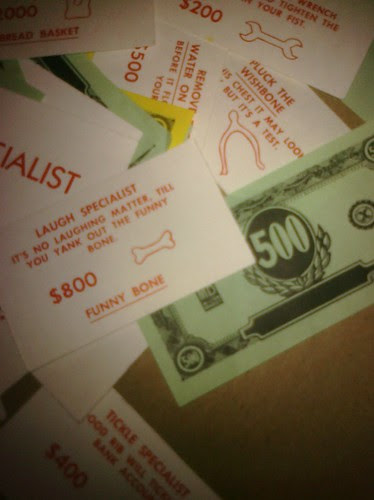 Posted by Regina Holliday at 8:39 PM