I worked at Barstons Child’s Play, a toy store in Washington, DC for 12 years.  My late husband Fred worked there for a year and a half.  We had very different jobs in the store.  I helped a lot of customers and Fred priced a lot of products.  He was amazingly fast with a pricing gun.  I was so proud of Fred, and he rarely made a mistake that beginners often made.  He never priced the product on the back.  Steven, the store manager, was very clear about his pricing expectations.  The price should be crisp and clear and on the front of the package.  Customers should never have a doubt about what was the price of a product.
This upfront pricing was so helpful.  It helped the customers browse the store free of worry.  I can’t tell you how many times I have seen concerned tourists pass by local restaurants in DC when the menu items are listed without prices.  The couples walk by those eateries and the old quote often attributed to J.P. Morgan seems to apply, “If you have to ask how much it costs, you can’t afford it.”
I am very glad we worked for many years at a store with clear and transparent pricing.  Occasionally, folks would come by with circulars from discount stores showing us deeply discounted prices on certain items that were loss leaders, but we supported a pricing structure that was reasonable and based on margin with excellent and knowledgeable customer service.
I was very disturbed by this lack of transparency when I began to delve into the world of medicine.  I also was dismayed by the different pricing structures based on insurance payments or lack of insurance.  For many years I was insured at my place of work, but we could not afford a policy for the entire family.  So, we paid out of pocket for every pediatric visit and every ER visit.  We would pay 100% of the bill for each appointment.  Pediatric sick visits would cost $125.00, check-ups with immunization would run close to $400.00 and an ER trip would be well over $1,000.  But as we would not know these prices until after we got the bill, each encounter was filled with the nervous worry: “How much will this cost us?”
When our entire family was insured with Fred’s job at American University, I began comparing the old rates we paid compared to the new ones with insurance.  Insurance paid at only 80% and the rest was written off.  As an uninsured family we had always paid 100% of the bill.  How is that possible?
I was further dismayed, in the spring of 2010 after hearing a presentation by a FICO group about fraud management.  They explained what a great service they were to insurance companies as they would track a hospital or physician practice for fraudulent coding that resulted in higher reimbursement then required.  This tracking could help insurers recoup funds or at least stop fraud.  I questioned the speakers, “Who is watching out for fraud against the uninsured or underinsured patient who is often paying at 100%.”  They looked at me quizzically first saying, “No one. Or if anyone was checking I would I guess it would be the DEA?”


I wondered who is out there representing consumers?  Who is demanding pricing transparency in Medicine?  Which practitioners are giving great service at good prices?  How do I even find out what prices are reasonable?  Then I met Alex Fair.
This is Fair Care: Alex Fair’s Jacket. 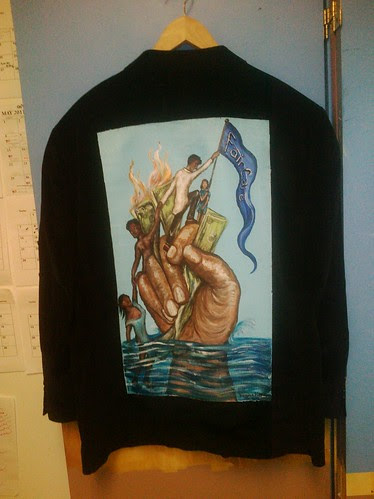 I met Alex at Health 2.0 Goes to Washington in 2010.  He walked purposely through the room.  Alex bristled with anger at a system so stacked against consumers so he designed http://www.FairCareMD.com.  It is an online resource that helps patients compare service options; they can negotiate and see which providers want to be part of a process of true transparency and access.  Alex created this vital service after trying to get pediatric wellness checks for his children, and finding out he was charged five times the price that he had been charged while insured.
Alex’s jacket depicts much of the anguish the uninsured, under-insured and those with a high-deductable plan feel while trying to get services.  I am sure you have heard of the phrase drowning in debt, but it most applies to those who have lost everything in an attempt to get medical care.  When I testified in March of 2010 about the great need for reform in our medical system, I met a very sick people who had sold all they had in an attempt to pay for medical care.  One of the saddest examples was a family in which both parents were sick and so was one of their children.  The father spoke to us from his wheel chair as he described selling their home and most of their possessions in an attempt first to pay for care and then to qualify for Medicaid.  The family was uprooted and had to move into a basement of a relative just to survive.
So within this painting a hand reaches out of the depths and clutched within his fingers are a few bills.  These bills are burning.  I have seen many pictures of money “burning” or “going down the drain.”  But those bills are usually $10’s, $20’s and $100 dollar bills.  This hand clasps a few ones and a five.  This is all he has and it is being destroyed.  When you live on the edge every dollar is so important.  Many times in my adult life money was so tight, that the only money left for groceries was contained within the spare change box on my kitchen counter.  I would sit at the table creating rolls of coins to pay for milk and bread, as Fred’s shoulders would slump in defeat at our economic status. 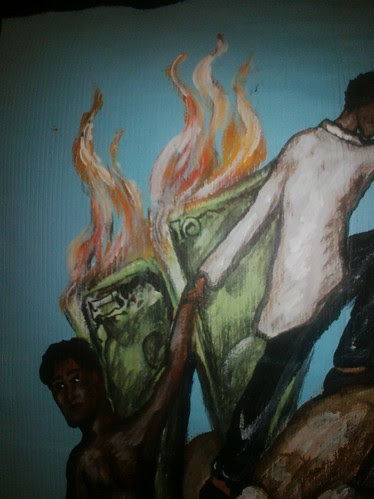 This is the reality of many of us in this nation.  Every dollar is important and 73 cents can be the straw that broke the camel’s back.
Upon this hand, a couple of figures climb.  Half in and out of the water a women tries to gain purchase.  Her hospital gown is falling off and her face is distraught.  Her husband grasps her arm.  He is naked, having literally  “lost the shirt off his back” in the pursuit of her care. 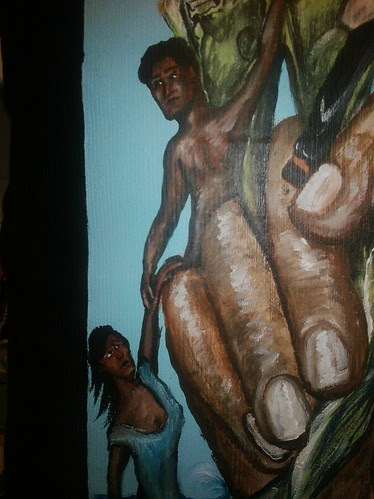 A doctor grasps the husband’s arm as he mounts the pinnacle of the hand place a battle pennant of FairCare.  Holding the flagstaff is a small girl.  She is our hope for the future.  Her face is lit with a small smile of joy.  She represents a future in which price structure is transparent, services are accessible, doctors are not hampered by excessive office paperwork and we all benefit by being healthier and unafraid to schedule appointments. 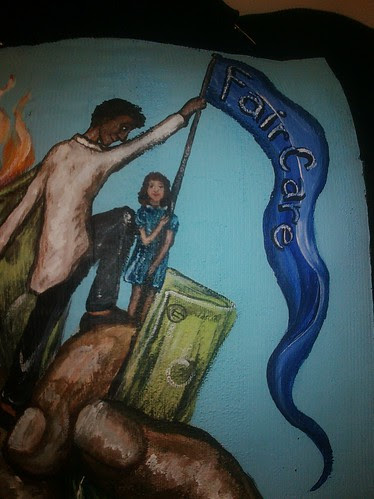 And that is FAIR.
Posted by Regina Holliday at 9:24 AM