This summer I participated in my first voter registration drive.  I stood on the street and attempted to engage with passerby as they hurriedly passed.  I spent most of an afternoon trying to reach the location for the registration drive. Then I stood having almost no success.  I asked Matthew Metz our team leader if it was always like this.  He told me it could be hard to get folks to stop.  But Matthew was relentless, and he did talk to a few interested parties.

Soon after, Matthew asked if I could cold-call some potential volunteers.  I told him I would try.  He gave the packet and script to read for the volunteer ask in the  Democratic campaign for Obama 2012 "Are you in?"

I wonder if the person who came up with that campaign slogan actually bothered to cold-call someone, on the phone, using those exact words.  “Are-you-in” is a run-on mass of vowels that sound very similar to the name of that girl elf in Lord of the Rings.  What was her name, that girl who was sort of despondent and pouty ... Arwen?  Yep, that is it.  Arwen.  Or Areyouin?  Where are the consonants?
Consonants are sexy.
Trust me, if you are cold calling someone on a summer Sunday afternoon you want some consonants to help you out.  So, after a few unsuccessful calls I chucked the script.  I made call after call.  I was able to get through three pages of names, and by the end I had four volunteers willing to help.  And though some were upset,  each of them mentioned how much they wanted to be part of the campaign and spoke of how they saw the big picture in national policy.  I had wished I had time to call more potential volunteers, but that was all I could do with two children at home on a Sunday afternoon.

The next day I dropped off the volunteer lists with Matthew.  He was excited to see how many volunteers I had found in such a short time.  I mentioned I had gone off script and that really helped.  I also told him l planned to do voter registration again, but this time I was bringing an easel. 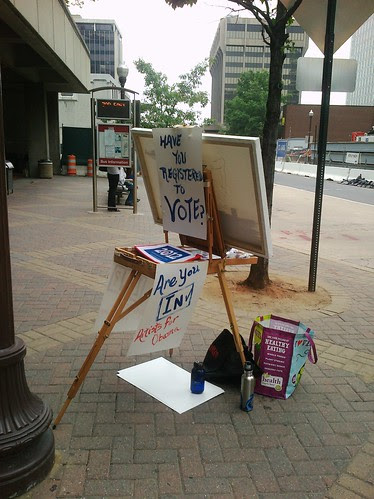 Using Google maps, I researched several different Virginia Metro stations to determine which one was best for some plein air art.  I decided on Rosslyn Metro station because it had access to the metro by a public sidewalk with a lot of pedestrian traffic.  Next, I decided to do some image research on Google to see what visuals the campaign folks were using to support this slogan.  I found nothing, just a blue box printed with the word "In."
So I began to think and I saw within my mind an in-box.  I remembered how happy I was to have my meager piles of papers representing volunteers.  I thought of all the power those volunteers represented and all the good work they could do.  The in-box  in my mind's eye was far beyond overflowing with papers, and those papers were volunteer forms.  So with my concept firmly in mind, I headed out to Rosslyn.
When I got there, I began to set up my easel and post signs all over it specifying two tings: Artist for Obama and Have you registered to vote?  This time I would not frantically follow the crowd, they would come to me.
Within minutes of beginning, a lovely young woman came over.  She was working with the folks at the flower stand.  Her name was Kryss Flores.  She said she would like to be in the picture.  I explained why I was painting the picture and asked if she would like to volunteer for the campaign.  Not long after speaking with Kryss, Matthew Metz arrived and began talking with other supporters. 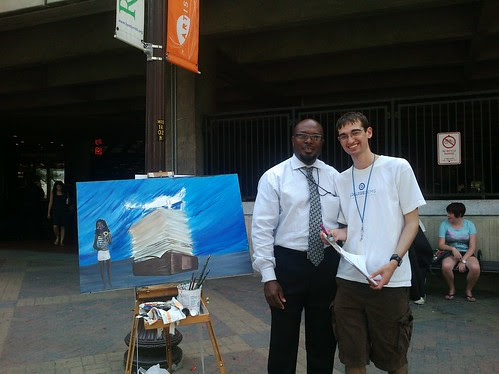 Matthew was so excited by how many people we willing to talk while I was painting.  It put folks at ease to watch shapes form and colors blend whilst talking about national policy.  It was far easier to converse without looking intently into far too earnest eyes.  It was much easier to paint and stand side by side of the eyes of the disappointed ones, who had hoped for so much more during this first term of office.
I continued to paint.  Above the massive in-box stood a community of volunteers holding a volunteer form aloft.  They are preparing to fold it into a paper airplane and send it on its way.  And to the right side of the group stands President Obama himself as one of the crowd. 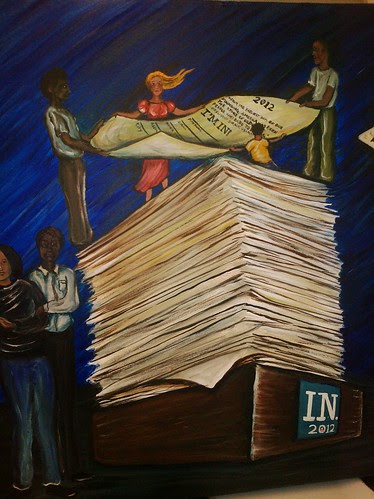 To the extreme right of the painting, a young man stands.  His body is twisted and it appears that the paper airplane will fly into his heart.   The young man’s arm is flung out and held within his hand is a smart phone.  There the image of the paper airplane form repeats.  This young man has joined the cause, the movement.  He is “IN” and he has a twitpic to prove it. 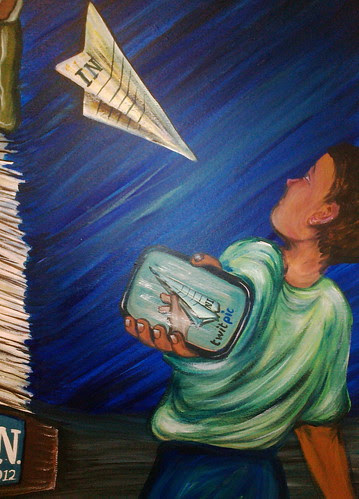 On the far left side of the canvas stands Kryss Flores with her flowers, and behind her others have joined as well.  I painted it this way because that is exactly what happened.  Kryss had friend after friend come over and volunteer.  She showed everyone the painting and her part in the big picture. 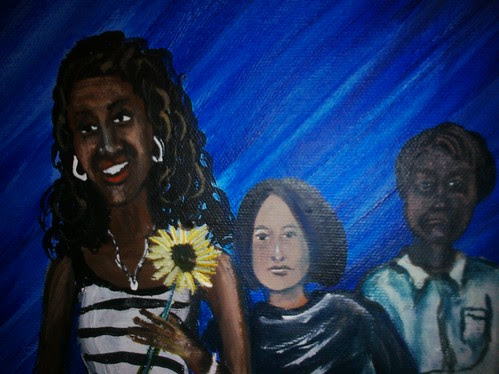 This is my vision of  “I’m IN!”  I hope the campaign is listening.  Because this is all we ask.  Paint us in the picture.  Give us a seat at the table.  We aren’t interested in robo-calls or OFA spam that asks “Can you donate just $15.00 dollars today?”  We want communication.  We want to be part of the vision. 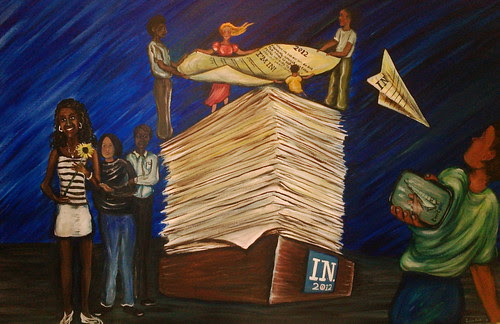 If you give us that, we will give you our talent, our time and our hearts. 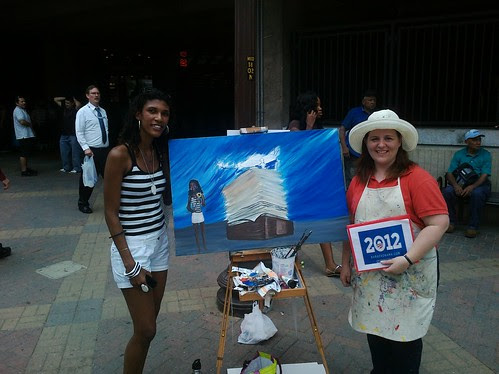 I brought the painting to the Democratic National Headquarters a few weeks ago.  Kouri Marshall said they would hang it up inspire the staff.  I am so glad that they did that.  It makes me very happy to know that they are looking at the flower girl from the Rosslyn Metro station every time they make a call and ask, “Are you in?” 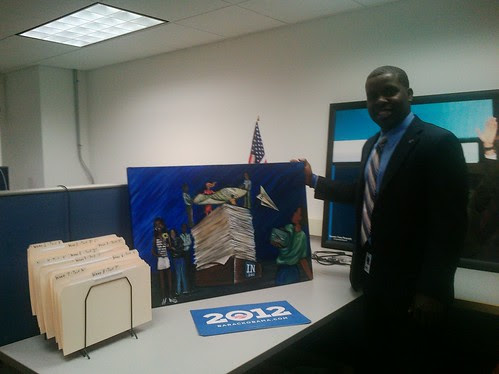 Posted by Regina Holliday at 2:01 PM

Email ThisBlogThis!Share to TwitterShare to FacebookShare to Pinterest
Labels: "Are you In?", "I'm IN", Democratic National Committee, Kouri Marshall, Matthew Metz, OFA