Attack of the Living Meme

The Holliday family had a great Halloween this year.  When my late husband Fred was alive, we had so much fun with this holiday.  I always made our costumes and they were very creative, complex and based upon a family theme.  There was an Egyptian year, a Marvel year and of course a Halloween theme around Doctor Who.  We would trick or treat down the avenue by the toy store where I worked as a happy family.

Then Fred died and it was so hard to enjoy Halloween. 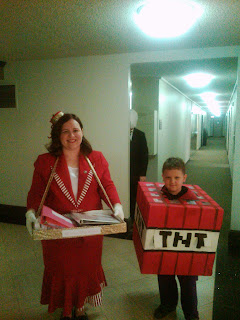 I would do my best to sew costumes with a large hole in my heart.  Last year I even missed trick or treating with the kids as I flew cross-country to give a speech in Oregon.  But this year Halloween was great!  Our theme was internet memes.  6-year-old Isaac was a TNT block from Minecraft, 14-year-old Freddie was a creepypasta known as Slenderman and I was “Binders full of Women.”

I wore one of my speaking outfits that is reminiscent of a 1940’s cigarette girl.  I created a carry tray of binders.  People asked me if the binders were full of women. I said, “Yes. Each binder was full of the profiles of women who are SpeakerLink speakers and major voices in Health Information Technology.”  Binders Full Of Women was a very popular costume idea this year, but I was excited to wear it because of an exchange on Twitter.

Many of you are aware that the hashtag #BindersFullofWomen became very popular on twitter on October 16th.  The next day I was tweeting from a conference in South Dakota, when I noticed that the mHealth summit in Washington, DC was promoting their keynote speaker line up.  I attended and enjoyed mHealth 2011 so I was following their posts closely.  I saw pictures of six men who were delivering keynotes, and not one woman.

So I tweeted, "Do not see any Women or Patient keynote speakers at @HIMSS @mhealthsummit mhealthsummit.org #mhealth #bindersfullofwomen #mhs12" 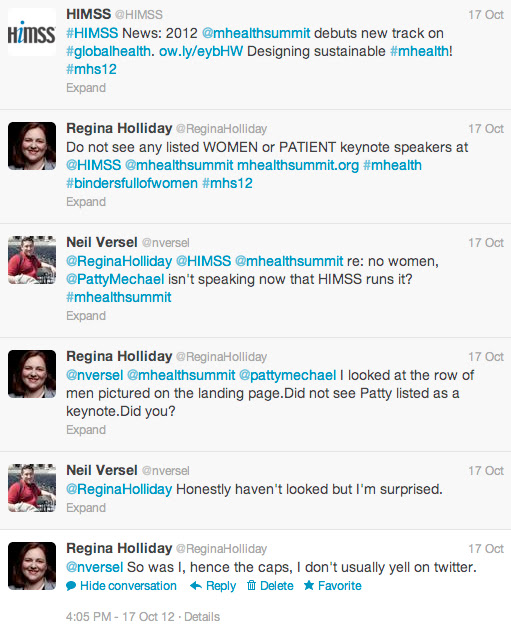 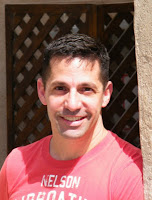 A conversation began about this issue on twitter between Neil Versel and I.  Very soon after Richard Scarfo, Vice President of Vender Events at HIMSS Media was messaging me.  He wanted to talk about my tweet.  We had a phone conversation about the seeming lack of women and/or patient speakers.  He told me they had reached out to many women but all of them declined for some reason or another.  He told me the schedule was not final and they were still looking for women speakers and would consider my recommendations for patient speakers as well.  I told Rich how happy I was that he had responded.  I told him about speakerlink.  Then I sent him profiles of several very strong women speakers who were patients, caregivers and focused on mHealth.

Soon I was able to tweet the good news.  The folks at HIMSS and mHealth were working with me and using @Speakerlink to ensure a greater balance in speakers.

From the profiles I sent Rich, he reached out to the MaryAnne Sterling, a local advocate well versed in elder care and patient data access. 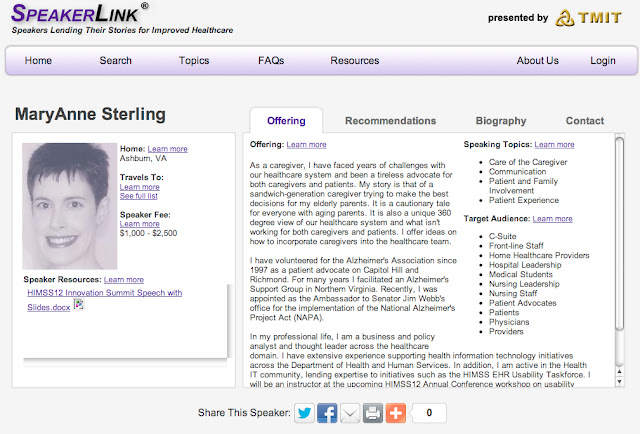 He also contacted Donna Cryer who is Patient in Chief to the oldest and largest advocacy organization focused on needs of those living with liver disease and she has a strong background in HIT. 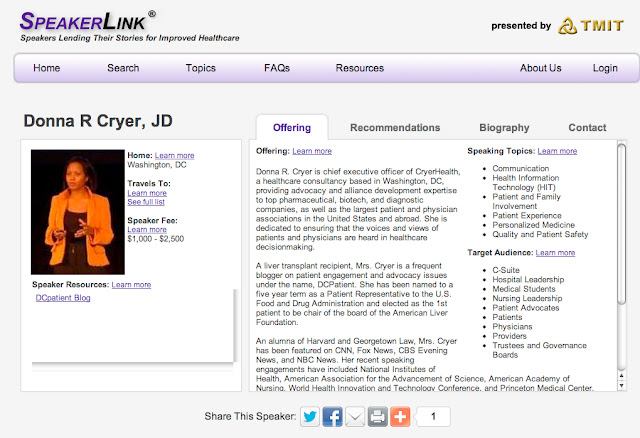 They both agreed to speak and will present on Tuesday, December 4th, at the mHealthSummit held at the Gaylord Hotel right outside of Washington, DC.  I hope you can attend December 3-5, 2012 and hear their wonderful presentations.  Thank you Rich for responding to a tweet and making the world a better place!  And for helping me have a very Happy Halloween! 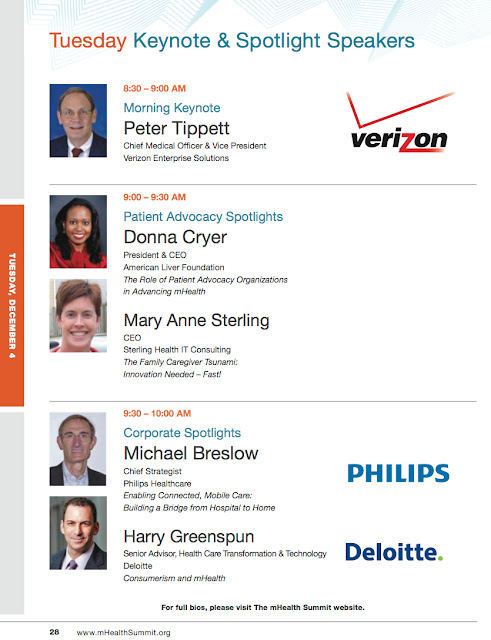 Posted by Regina Holliday at 9:50 AM