My late husband Fred and I were introduced to the theory through the book Fingerprints of the Gods in 1995.  This was a really edgy theory proposed by  Charles H. Hapgood.  Charles even shared his theory with Albert Einstien in the 1950’s and received his support.  Earth crust displacement theory was considered rather odd by much of the scientific establishment.  Unlike plate tectonic theory, the gradual movement of the continents, crustal displacement theory supposes that dramatic sudden shifts can occur.  Imagine if you will, the sections of an orange floating loose within its peel.  Imagine that peel suddenly shifting 155 degrees around.  That would be a polar shift.  Landmasses would be in completely new latitudes.  Antarctica could be temperate.

It was an fantastic theory almost 20 years ago when I first heard about it and I was amazed to hear it had garnered enough scientific interest in the years hence to be debated in the mainstream scientific press.  For many years, it had seemed that people were far more comfortable with the incremental change of plate tectonics than the rapid change in perspective required for understanding a polar shift.

I thought crustal displacement theory could easily be applied to the world of health care.  For many years the world of medicine was a slow world of focus groups and command and control.  But then social media came and the picture began to change rapidly.

Social Media is the reason I know Emily Hackel.  She lives in New York and works for Edelman, a global marketing and public relations agency.  I met her initially through Twitter.  I met her later in real life and she is a vibrant soul who lights up with intensity as she discusses health care.

She just joined the Walking Gallery and her jacket is  “The Sleeper.” 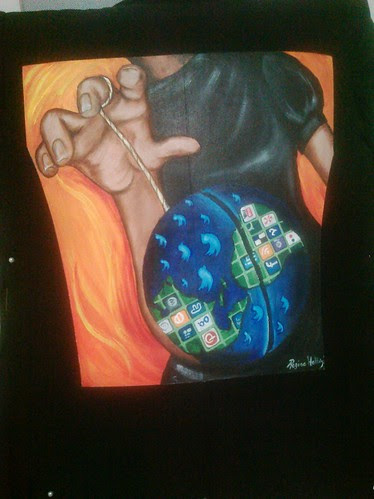 I named it thus, because in this painting Emily holds the world dangling on a string.  Here is the moment of tension; here is the yoyo move known as the sleeper.  It is that moment of taunt suspense before the next move begins and the world spins and shifts upon it axis.   Upon this yoyo world the continents are covered with well-known social media sites and the oceans flow with Twitter birds.

When my sister was in high school she wrote an original oratory “Life is like a yoyo, it has its ups and downs.”  I thought about that speech as I painted this.  In our fast world of social media, I see those ups and downs on a daily basis.  I see a world that is very rapidly changing.  Ideas and individuals that were considered too edgy are rapidly becoming mainstream.

I am glad to know amazing young women like Emily.  I would have never met her without Twitter and its currents.  I am glad she lives in time where she can talk about polar shifts and our changing world and be taken seriously. 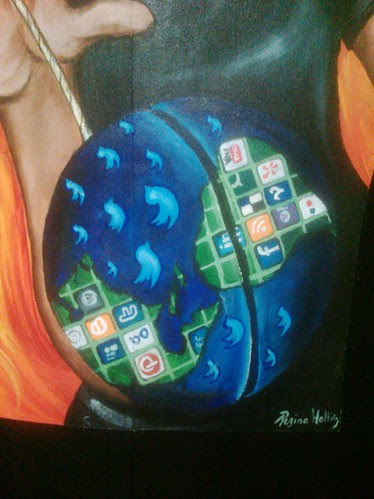 Posted by Regina Holliday at 6:13 PM