Half Past Midnight: Mark's Jacket

When my eldest son Freddie was born, my Mother-in-law Joan desperately wanted to create a name for him that was all her own.  So she began calling him her “little blue-eyed angel.”  That worked for a while, until he was able to talk.  He would often grimace or look at her with worry when she used her loving name for him.  One day he told her, “I’m not angel, and he is scary.”  Have I mentioned that Fred was writing a dissertation on the Buffy the Vampire Slayer at this time?  He was often watching episodes of Buffy and …Angel.  You know, the blood-sucking vampire who started out brooding, turned evil, and then went back to brooding?  No wonder, Freddie did not like the pet name his Grandmother had bestowed upon him, it was a matter of context.
Well a few years later Joan was given another opportunity; we had a second son named Isaac.  She began calling him her “little blue button.”  He too put up with it, until he could speak.  He told her, “I’s not a blue button, I’s an explosion button.”  Then he threw his arms up in the air to mime a massive explosion.  At that point Joan gave up.  I thought that was the end of the Blue Button.
But lives change, and children grow.  Yesterday, I talked of Blue Buttons again but this time it was with a film crew who are working on a short video for the Markle Foundation.  The Blue Button is currently used within the Veterans Administration to provide vets with a complete download of their medical records.  It is a major step forward in information access within the patient community. The VA developed the Blue Button working with the Centers for Medicare and Medicaid Services (CMS), and the Department of Defense, and the Markle Foundation's Consumer Engagement Workgroup.   I was glad to get a chance to speak with them as I was designing a jacket for Mark Scrimshire  (@ekivemark on Twitter) the creator of Health Camp DC for his participation in The Walking Gallery. 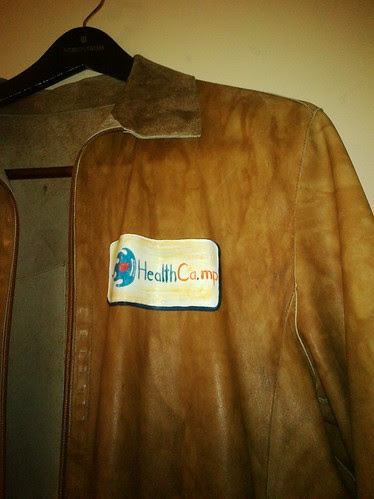 After the film crew left our tiny apartment, I celebrated my birthday by finishing the painting on Mark’s jacket. Mark’s jacket is leather one.   This is somewhat not quite the vision of The Walking Gallery, but it is a fine leather jacket, almost a business suit.  Mark loved this jacket, and was saddened when he placed a nametag upon it and ruined the front left lapel area.  The residue left a very obvious mark, and Mark’s beloved jacket was relegated to the dark inner recesses of his closet.  Then I told him about the Gallery.  The jacket was saved!  I painted a little logo on the front to hide the offending blemish.  Then painted the back with Mark’s message. 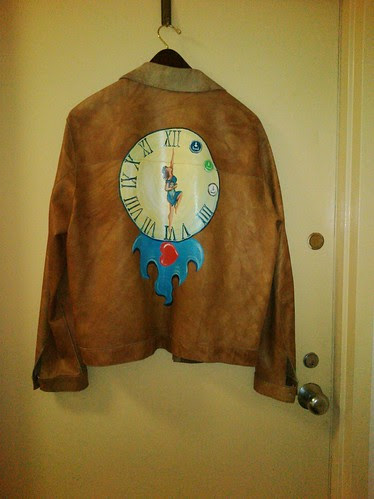 This is Half Past Midnight.  In this painting, time is flying.  The blue flames and heart of health camp are in the wake of the clock’s journey.  Numbers four through twelve on the clock-face are written in Roman numerals.  I wrote the numbers in this way to denote a file conversion and the toppling of an antiquated system of thought.  I learned how to tell time on a Roman Numeral Clock and remember the painful thought process as I converted the concept of time into a number sequence and then converted that into its Roman numeral equivalent, quite a heady brew for a five year-old’s mind.   I think it is a good visual of the translating challenges we face as we use ASKII files and claims based data and try to utilize them in a functioning personal health record. 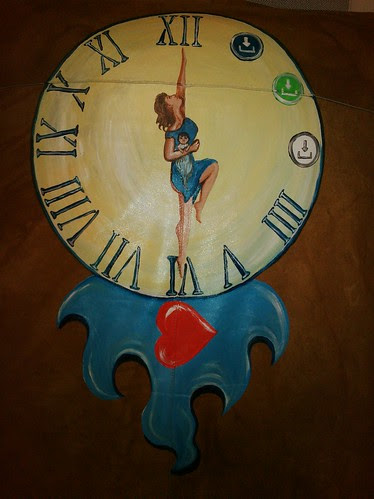 In the center of the clock face a female patient flies posed like Superman.  Her foot points down to VI, as her arm points to XII.  In her other arm carries a baby pressed close to her ribs.  The numerals I, II and III, have been replaced by buttons; First the Blue Button, next the Green Button and finally the White Button.  These buttons form the Rainbow Button Initiative. 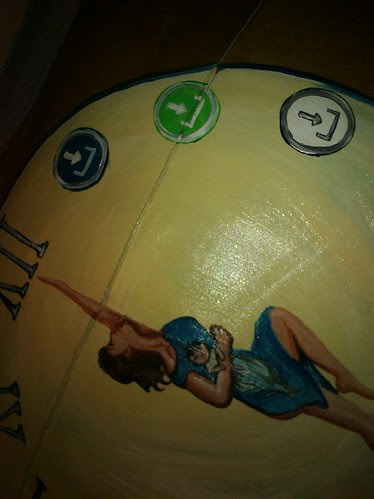 On March 21st 2011, Mark had attended Health 2.0 in San Diego.  There he heard a lot about the Blue Button.  But he also heard patient advocate Dave De Bronkhart speak about a potential new button:
“At a recent round table looking at Patient Centric Health Care. Dave DeBronkhart (@epatientdave) mentioned the idea he and some Health Change Advocates had proposed of the Green Button. The purpose being to allow people to easily share their health data in anonomized form for research and other purposes.  I mentioned this at the Patients 2.0 session and connected this with another initiative....”
#Patients20 @health2con The Rainbow Button Initiative- build on @toddpark idea.Hosted by Healthca.mp Foundation
by Mark Scrimshire
Soon after he added to the conversation with the concept of  a white button:
“The White Button builds on the concepts behind the Direct Project which is about creating "specifications for a secure, scalable, standards-based way to establish universal health addressing and transport for participants (including providers, laboratories, hospitals, pharmacies and patients) to send encrypted health information directly to known, trusted recipients over the Internet. The Network is a set of standards, services and policies that enable secure health information exchange over the Internet. The project itself will not run health information exchange services. Several Federal agencies and healthcare organizations are already using NHIN standards to exchange information amongst themselves and their partners. The Direct Project will expand the standards and service descriptions available to address the key Stage 1 requirements for Meaningful Use, and provide an easy "on-ramp" for a wide set of providers and organizations looking to adopt. At the conclusion of this project, there will be one nationwide exchange, consisting of the organizations that have come together in a common policy framework to implement the standards and services. This project is open government, and as such, contains avenues for a broad range of public participation. See below for more information on participation.
The simple idea is to take the concept of the Direct Project and surface it for Patients as a White Button.  When you put these together you have the Rainbow Button Initiative as a simple concept for Patients to manage their Health Data.  Let's work on these ideas under the auspices of the HealthCamp Foundation. We can progress the ideas at upcoming HealthCamps and provide an update at HealthCampSFBay and Patients 2.0 in conjunction with the Health 2.0 Conference this coming September.” ~Mark Skrimshire
So on this jacket, Mark’s Rainbow Button initiative begins.  His vision could change the way patients receive their data.  It demands timely access while channeling the flow in helpful ways.  And that is the difference between a tool that can help us and a button that leads to a random explosion of data.
Posted by Regina Holliday at 2:29 PM