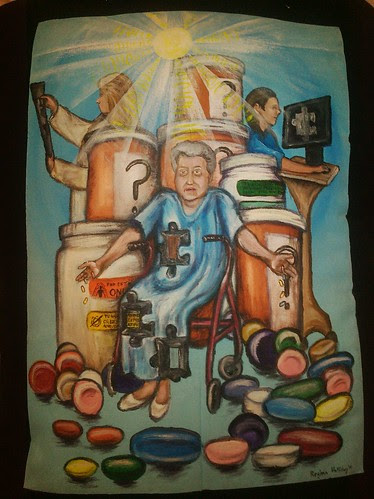 There is nothing more tragic than a missing puzzle piece.  At least, that is something my mother would think.  She loves jigsaw puzzles and every Christmas I mail her a new one.  Some of the ones she loves the best I have framed for her, and they are displayed upon the wall as art.  Even though my mother suffers from arthritis, I have seen her crawl upon the floor to recover that fallen puzzle piece.  I have heard her sad mutter and her anguished face upon discovering that within a 500-piece puzzle one piece is missing.  “It is ruined,” she says, “If even one piece is missing, it is ruined.”
Recently while talking to Ted Smith about The Walking Gallery and his jacket, I began thinking about mothers and jigsaw puzzles.  I met Ted Smith officially on Facebook on September 6th, 2010. Ted is Sr. Advisor, Innovations and Technology Transfer, ONC at U.S. DEPARTMENT OF HEALTH & HUMAN SERVICES.  In the fall, we were both asked to participate as judges of the Health 2.0 Developer Challenge using Community Health Data.  He reached out to me and asked to be my “friend.”  We spoke in person at the IFHC Patient-Centric Roundtable, on March 4, 2011.  He seemed kind and rather quiet in room filled with the large voices of the likes of e-Patient Dave, Ted Eytan and Alex Drane.  He stayed in touch with me in the months hence and I asked him to join The Walking Gallery.
The Walking Gallery is two weeks away, and so far I have danced around the edges of the sadness and the deep despair that informs so many of these jackets.  Ted’s jacket begins to plumb those depths of emotion.  This is Ted’s jacket: “Something Sacred.” 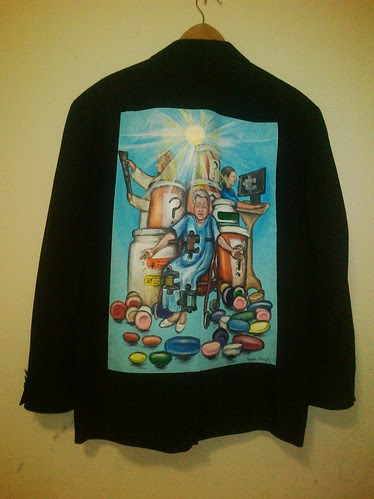 Ted’s Mother, Grandma Smith, sits in the center of the frame. Her face stares out at the viewer with the frank appraisal of those who are about to die.  “Why?” She asks us as multiple pills drop from her hands.  Her hospital gown covers her nakedness, whilst large chunks of her body have been removed.  The holes that are left behind form the shape of a jigsaw puzzle pieces. 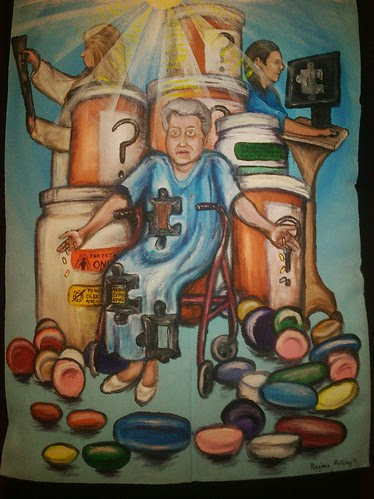 On either side of the frame two medical professional view the X-Rays of Grandma Smith.  Our left side doctor holds her x-ray to the light and decides with that piece alone she will prescribe a certain medicine. 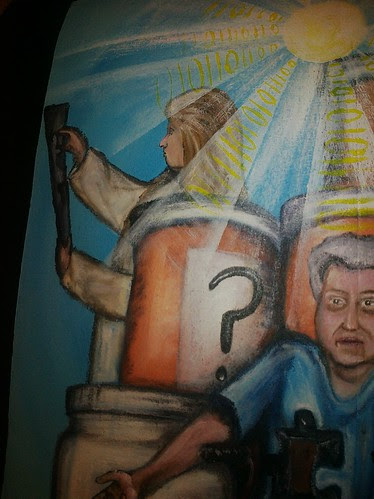 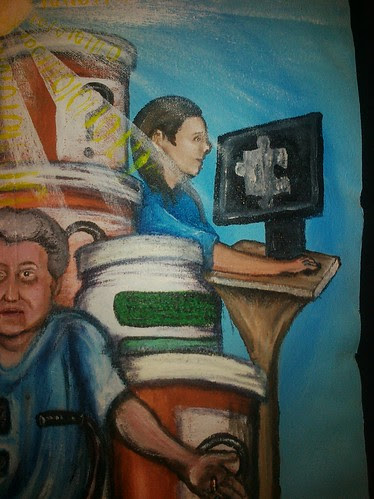 On the right side of the painting another Doctor views another puzzle piece upon a computer screen.  She, too in turn, will prescribe another drug to solve the problems of this symptom.  Neither Doctor will put the pieces together to treat the whole wonderful person that is Grandma Smith.  She would have no reconciled view of her past or current treatments and the cycle of side effects and symptoms would be larger than any doctor appeared capable of reconciling.
The drugs become a towering landscape that dwarfs the patient in its midst.  Label upon label is affixed upon jar upon jar of medicine.  All the while, the patient wonders why.  Alone and afraid, she sits besieged as the pills encroach.  So she suffers unnecessarily and expensively from the side effects of the treatment of a narrow range of disorders, all the while a rare and aggressive cancer was attacking her from within.
But there is hope within the painting, the beams of the sun pour down upon the terrifying image.  Those beams are made of the 1’s 0’s of binary code.  This is the data cloud that can save us.  This is all that is simple and transparent.  This is Ted’s hope for us.  Ted hopes for a time when someone else’s mother’s full treatment can be viewed in one place.  He envisions a future where a computer can deal with the simple stuff, i.e. drug interactions, and Doctors dealing with the harder stuff. 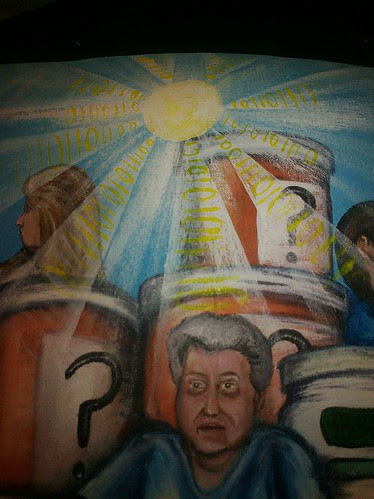 He sees a future where a person’s entire medical history is only a mouse click away; a future where the lack of one data set is considered just as tragic as my mother’s lost puzzle piece.
Posted by Regina Holliday at 11:42 AM