It has been almost a month since the first gathering of The Walking Gallery.  I have been asked, “When shall we gather again?”  Many of us have been walking in the past month.  I wore my jacket in DC before CMS, in Nashville before Premier and in Orlando before Avatar’s Patient One.  I have seen pictures of Keith W. Boone, Whitney Zatzkin, David Hale, Ted Eytan, Maumi JC Chatterton, Mark Scrimshire and Christine Kraft wearing their jackets at conferences in this nation and abroad.  The gallery is indeed walking.  Recently I spoke to Matthew Holt, Indu Sabaiya and Lizzie Dunklee at Health 2.0 and they have agreed to host the Gallery on the evening of September 25th after the Patient’s 2.0 session.  I am not surprised that Health 2.0 would support the idea of our little start-up, after all they have been doing that for a long time. 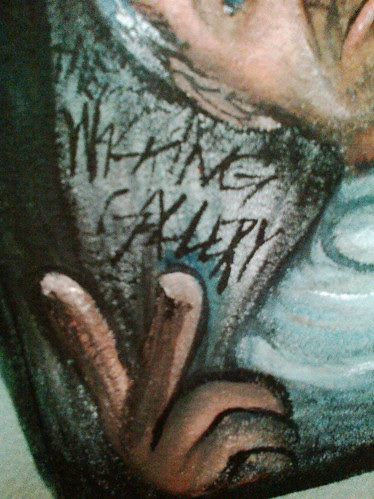 My first foray into the world of medical advocacy was during a “small” Health 2.0 meeting in May of 2009.  In that meeting, I learned that there are some amazing people working diligently to bridge the digital divide and help patients using the tools of technology.  And a little less than a year later I would meet Matthew Holt, a man who helped define the concept of Health 2.0.  In the spring, I would meet him at a small informal dinner in DC and would enjoy being part of the jovial conversation and listening to his lilting tone across the dinner table.  He was a gracious and kind host and made all feel welcome at the table. 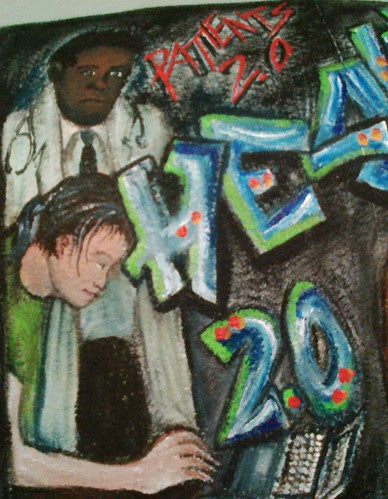 Matthew soon asked me to be part of Health 2.0 Goes to Washington in June 2010.  I would be a presenting patient speaker and would take part in a panel discussion on Meaningful Use.  It was an amazing day.  I was overjoyed by the welcome given to those of us representing the patient community.  Health 2.0 staff treated patients with as much dignity and respect as they would to any CEO, tech start-up founder or governmental employee.
The next event was the Fall Health 2.0 Conference in San Francisco.  On Wednesday October 6th 2010, Health 2.0 held a special pre-conference event called Patients 2.0.  That day scores of attendees and patient speakers assembled and spoke about the role of the patient in the world of Health 2.0.  It was an amazing session, and as Health 2.0 organizers were very cognizant that most patient advocates are self-funded there was no fee for participation in the Patients 2.0 session.
This was also the second time I painted on site at a health conference.  Matthew was so supportive of my work painting in the back of the room, and he let me close the conference with a short speech and explanation of the painting.
So at Health 2.0 San Francisco Sept 25-27, 2011, in addition to a second assembly of The Walking Gallery, I shall be painting again.  And so will you.  This year Health 2.0 will meet the street art movement.  We are asking all attendees to create their own “tag” or sticker to be part of a mural piece painted on site.  This painting will be another bridging concept as it will include many of the “old masters” in the world of medicine as they meet their Health 2.0/street artist counter points.
Why paint Health 2.0 folks as street artists?  As I explain in an upcoming article in Interactions: 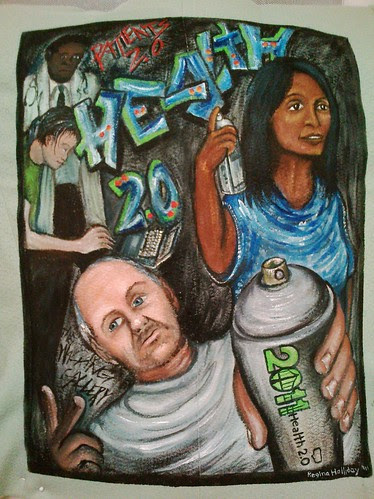 “I don’t know if healthcare strategist Matthew Holt (www.matthewholt.net) and other Health 2.0 friends consider themselves “street,” but the Health 2.0 movement has much in common with the street art movement. The innovators in health data often sidestep traditional institutional hierarchies in their attempt to create better medical care. Using a loose organizational structure supported by the tools of social media, these innovative thinkers post their work in the comments sections of online patient communities as well as in insider publications within the medical field. Their “Code-a-thons” mimic in participation and intensity the energy of a well-attended flash mob. The frequent rise and fall of tech start-ups within the Health 2.0 community, while regrettable, reminds me of the ephemeral stencil art of the gritty street. Their very short-term existence creates and fuels a type of graffiti  “tag.”  The abandoned start-up’s websites and forgotten healthcare logos litter the web.  They are like “Obey” or “Borf” part of a meaningless urban chatter when viewed alone.  View all of those tags together and they can lead to a data access movement.”
I will paint this vision with your help during the entire event, and on the last day we will finish the painting as we finish the conference.  The last session will be a panel of patients and the stage shall fill with a Walking Wall of the Patient Voice.
So who shall join us this fall in San Francisco?  Who is ready to be part of a movement?

Because you know what I say, we are all patients in the end.
Posted by Regina Holliday at 7:20 PM