Memory is a funny thing.  It can be so clear one minute and misty the next.  And I can remember so many things of long ago.  And as I go back to these first memories the things around me grow ever larger as I grow ever smaller.  I remember a trip, to a place in the Ozarks, with water and the wishing wells.  I am throwing pennies in wells.  I remember my older brother grabbing my hand as I strayed too near the edge, and telling me not to drink the water, for he was six years of age and he could read the signs.
I was only two. 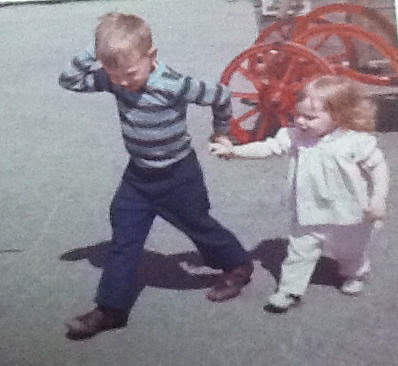 Memory is a funny thing.  And things that may not seem important are flash frozen within my mind, like that 2-liter of Pepsi.  I see it bounce upon the clean linoleum floor of our mobile home.
We couldn’t believe it. It was 1978 and we had purchased our first 2-liter of Pepsi.  And it was just like in the commercials, these bottles bounced- they didn’t break like the glass bottles.  And as my little arms lifted the heavy 2-liter off the floor, I marveled at the weight of it.  So this is what two liters feels like.
I was only five.
I remember the night I found my favorite fairytale.  I was to sleep in the spare bedroom in My Aunt Hilda’s house.  My sister and I were spending the summer with our spinster Aunt Hilda and our widowed Aunt Minnie.  We were far away from our loving Mother and a Father who should not spend long summer days alone with little girls.  I found my Aunt’s collection of Junior Classic Fairytales published in the 1950’s beside her sewing box.  Between the green linen covers of one book I found a Grimm’s Fairytale: Mother Hulda.  I love this tale.
It was a tale of a young girl who must spin all day for her lazy stepsister and stepmother.  She spins so much that she cuts her fingers on the spindle and covers it with blood.  Her stepmother commands her to wash the spindle in the well.  She tries to wash the spindle in the cool deep waters.   Accidentally, she dropped it into the depths.  She was filled with worry, but told her stepmother the fate of the spindle.  Her stepmother tells her to jump in after it. Filled with despair she jumps into the well.  Instead of splashing into the dark depths, she falls into another world.  It is a beautiful world with blue skies, green grass and flowers.  She walks a while and comes upon an oven full of bread.  The loaves call out, begging to be removed before they burn.  The girl removes the loaves.  She walks further and comes upon an apple tree.  The apples beg her pick them as they are ripe.  The girl picks the apples.  The girl walks even further and finds a cottage with and old woman inside named Mother Hulda.  She serves the old woman for weeks and weeks.  Mother Hulda rewards her for her labors by showering her with gold.  The girl returns to our world, and her stepsister is jealous so she jumps into the well.  She doesn’t save the bread and she doesn’t pick the apples.  She does a poor job of helping Mother Hulda.  In the end, Mother Hulda covers her in tar.
I loved to read this story in my bedroom at Aunt Hilda’s.  It was unlike any other story I had ever read.
And I was only ten.
Memory is a funny thing.  I don’t remember when I first heard of Helen Haskell.  Oh, I can look back on an email thread and see her name for months before I knew her and what she represented.  I remember in the fall of 2009 Lisa Lindell telling me about Helen’s campaign to make sure all medical providers wear clearly marked nametags as to who they are and what is their job.  In the summer of 2010 when I was researching the painting “Give Us Our Dammed Data,” Helen gave me a list of potential authors for the piece.   She is an amazing resource and advocate in the patient safety community.  And as I got to know the story of Helen I got to know the story of Lewis: her wonderful son who died as a result of medical errors.
And he was only fifteen.
This is Helen Haskell’s Jacket:  “A Wishing Well in Never, Neverland.” 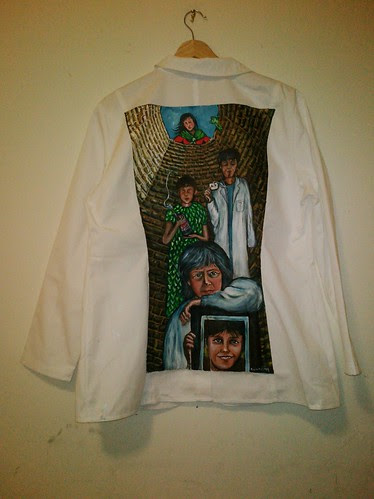 I wanted to finish this jacket in time for the Walking Gallery, but that did not come to pass.  I look at these jackets in my closet, and I pull them out as the vision of what should be depicted flows freely in my mind.  And when I see Helen’s jacket and read her son’s story, I feel like I am looking up from inside a deep well.
Have you ever wished so hard, then threw the coin within?  Have you ever prayed at night that this was just a dream?  Have you, constant reader, stopped the tale and closed the book, before the bad thing happens?   I know that nightly Helen and I gaze within the well.  And one day when the pain became too much we jumped inside and became advocates.  We landed on our feet in another world.  And daily we pick the apples and save the loaves.  We send out articles and speak at conferences.  And Helen does it because Lewis should not have died.
Lewis Blackman is in this painting twice.  He stands within the piece as the boy in green tunic of Peter Pan.  He is dressed as Peter because he will always be remembered as a boy.  Did you know that the character of Peter Pan was modeled after the author J.M. Barrie’s 14-year-old brother David?  David died when he was only 14 due to an accident.  His mother grieved deeply for her lost David, and   Barrie’s life was defined by this experience and it helped create his Neverland. 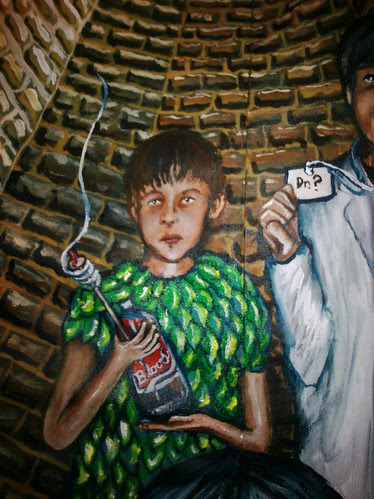 Due to the death of Lewis, Helen is creating a very different Neverland.  Folks like Helen and The Leapfrog Group coined the phrase “Never Events.”

These are things that should never have happened, these are tales that cannot be told without a wince or a gasp.  Lewis is holding a 2-liter plastic container in this painting, but it is not Soda.  It is blood.  And I think of the weight of that 2-liter, with all the memories of a child.  Helen’s child laid in hospital his abdomen filling with three liters of blood as he died in excruciating pain.  That memory echoes in the mind.
It bounces. 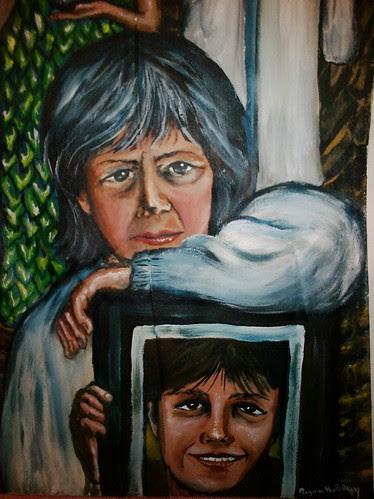 Below and to the right, Helen clutches a picture of Lewis.  He is happy within the frame in direct contrast to the deep sorrow on Helen’s face.  Lewis was brilliant.  Lewis was a scholar.   He was on the fast track to attend Duke University and for his light reading while hospitalized he brought Dune and Julius Caesar.
He went into the hospital on a Thursday, and his parents had no idea how dangerous a hospital can be on weekends.  They had no access to see a medical record with a nurse’s note that “he was not producing urine.”  They had no access to a medical reconciliation report that would have listed the dangerous side effects of Toradol, a drug that is diluted by urine flow.  These were really important facts.  These were data access points that could have saved a life.  Lewis was given 17 adult level doses of a drug that ended up killing him within four days. 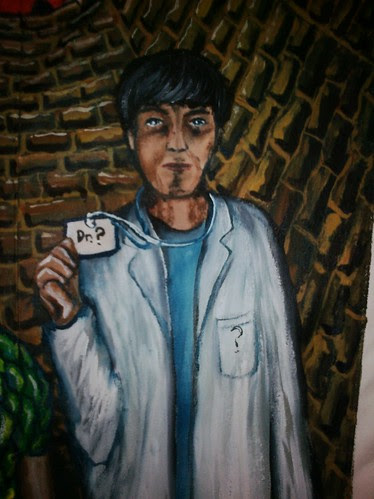 All along Helen asked to see a Doctor.  Instead residents working 36-hour shifts attended Lewis.  She asked again and again to see a veteran doctor. Finally a man appeared that she thought was an attending physician, instead it was a chief resident.  Helen didn’t understand this, as she did not see any nametag making his position nor experience level clear.  She would spend years supporting legislative change in the sate of South Carolina that would require all doctors to wear identification tags.  The Lewis Blackman Hospital Safety Act was passed due to her efforts in 2005. 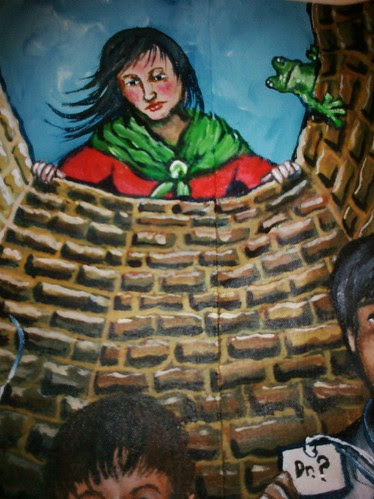 Above and looking into the well, is a frog.  The frog looks concerned and braces its front foot against the inner lip of the well.  Is this the frog prince?  Is this that doctor who appears as someone they are not?  Or is this the Leapfrog?  Is this the refusal to accept the status quo; is this the deep desire to create a Never Event land?
I am so glad I met Helen.  In patient safety advocacy circles, she is often viewed as a mother to us all: the lady in the well of tears, the founder of MAME, Mothers Against Medical Error.  We shall work so hard with her to create this new world of Never, Neverland.
As a child I loved Mother Hulda.  I loved her even though I did not know her other names: Holle, Hel, Hilda, Holda, the Goddess in three parts (Maiden, Mother, Crone), the Guardian of the Netherworld, the protector of children, the Goddess of the storm, the leader of the Wild Hunt.  Mother Hulda waits at the bottom of the wishing well.  First and foremost she is the Goddess of spinning.   She is making a mighty web.  And when I think of Helen, I think of this web, for Helen is spinning too.  She is making a mighty web of advocacy that I am honored to be part of.
Posted by Regina Holliday at 8:47 AM