Master of Ceremonies, Backstage at Meaningful Use: Josh Seidman's Jacket

For 12 years I worked at the toy store Barston’s Child’s Play on Connecticut Ave in Washington DC.  Over the years I helped so many local folks.  My customers included many of the great people I work with now, but then I only knew them as really nice customers.  These days, I know them as Eva Powell at the National Partnership for Women and Families, Christine Kraft at Perfect Sense Digital, Claudia Williams with the ONC(Office of The National Coordinator of Health Information Technology) and Susannah Fox with Pew Research.   Another customer was Josh Seidman with the ONC who leads the Meaningful Use Division. 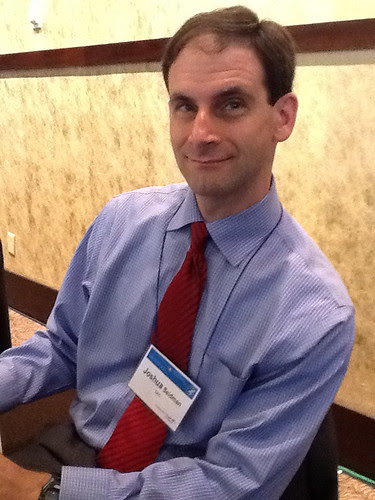 Now, these wonderful people see me dressed in skirts and business jackets speaking on the stage, but once upon a time I helped them wearing old t-shirts, sneakers and jeans with holes in both the knees.  There is a really good reason for the holes.  At Child’s play we kneel to help you.  We kneel constantly to talk with our young customers or to price product and display it upon our shelves.  We even interview potential new-hires seated upon the floor.  So when I see holes at the elbow or the knee, I know I just met someone who works.  Someone who does hard physical labor.
Last week, I had the honor to paint four jackets for The Walking Gallery while attending the 2011 Regional ONC Meeting in Philadelphia.  I started with the one I brought along belonging to David Sides from Cerner.  Then I cornered Anita Samarth from Clinovations, I got one of her jackets.  Then I asked Josh Seidman for his.  During a break he rushed back to his hotel room and brought down his spare jacket.  As I mounted the jacket upon the easel, I could not help but notice Josh works very hard. 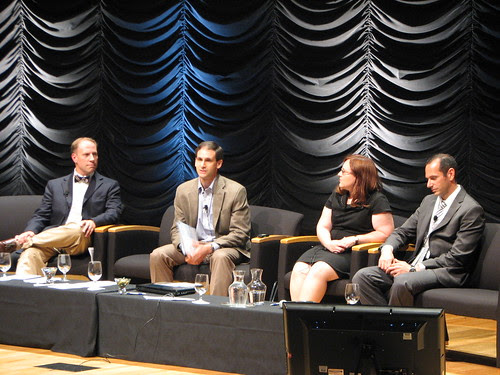 Both elbows had the tell tale holes left behind by long hours at conference tables.  Yes, Josh labors on Meaningful Use often as a servant leader.  He is quiet and thoughtful.  His head is often ducked in thought, and he thinks so carefully before he speaks.   I have presented twice with him on panels and he always has something profound to say.   He maybe the Master of Ceremonies at Meaningful Use, but he is humble and his jacket has holes in the elbows and that means so much to me.
But his story means even more, because Josh is a Father and Josh is a Son.  And Josh knows in a very real way the power of patient and caregiver access to the Electronic Medical Record.  This is Josh Seidman’s jacket:  Master of Ceremonies, Backstage at Meaningful Use and I painted this as Josh spoke on stage before the assembled crowd. 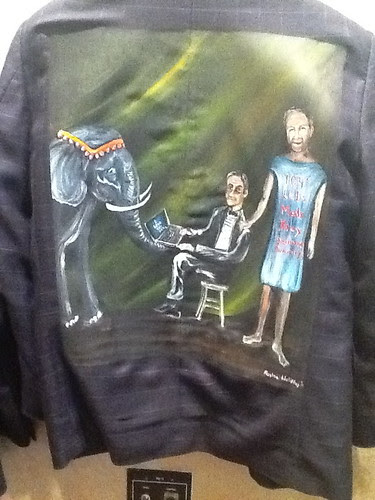 Last fall, Josh wrote a personal blog: Meaningful Use Expert’s “Virtual Bedside” EHR review
about his long distance experience with his Father’s hospitalization.  Josh’s father was admitted to the ICU 500 miles away in Boston.  With consent, Josh was able to log into the hospital patient portal.  He was able to view lab data, active/inactive medications, x-rays, cardiology reports, ECG’s and blood cultures.  After discharge, Josh was able to view the discharge summary as well.
The portal was not perfect, it could have been more user-friendlier, but it was access.  And as I Josh can tell you, family members and patients suffer great emotional anguish if they have no access to timely communication during a hospitalization.
Also, there were important pieces of information left out of the portal.   There were no progress notes nor CT scan results nor any way to provide secure messaging to the care team.  But the access that was available was better than being alone in the dark worrying.

So in this painting, Josh is backstage and the curtain is drawn.  He sits upon a circus stool.  He is wearing the Ring Master’s uniform.  He has a slight smile with tired eyes.  He is working on a Laptop trying to access needed information.  Beside him stands his father.  Writ large upon his Fathers chest are the elements of his clinical record. 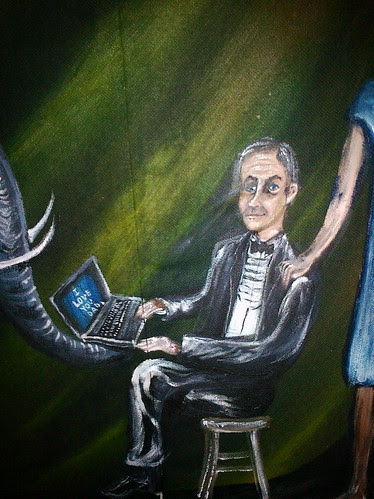 To the far left stands a circus elephant stoically, patiently supporting the laptop computer with his trunk.  Here is the elephant in the room.  This is the emotional elephant that is such a large part of information access.  But it is also the patient/consumer/caregiver as the elephant. 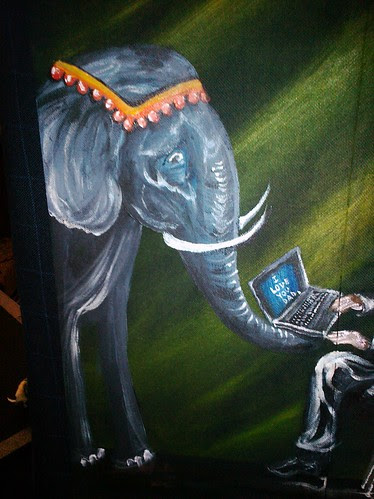 A major aspect of this meeting was the continual mention of engaging the consumer.  And like a good advocate friend of mine said recently, “I don’t want to be engaged, that is after the fact, I want to be on board from the beginning.” 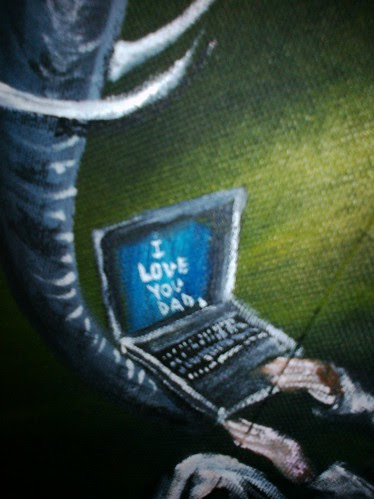 You see, I could have written any clinical fact on this laptop screen, but I didn’t.  Because the most important part of timely access to the EMR was summed up in four words, “I love you Dad.”   And that day Josh wasn’t the Master of Ceremonies of Meaningful Use, he was just backstage, part of the cast and crew sitting in darkness and praying for a little light.

I saw Josh heading home on the slow train to DC.  He was wearing his jacket.  He was leading with his patient story.  This is the true vision of patient participation.  Thanks Josh for all you do.  You help all of us who are wearing thin within our advocacy, by all you do and say to support the mission of the Patient Voice in Meaningful Use. 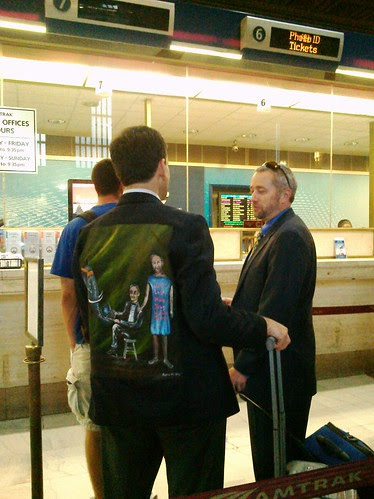 Posted by Regina Holliday at 8:46 PM