I was in first grade in Oklahoma in 1978.  I had the most beautiful teacher named Mrs. Buckley.  She had long shiny black hair and wore red lipstick.  She would sit in her teacher’s chair as we gathered around on the carpet in a room filled with sunlight from windows overlooking the playground.  She would open a very big book with the most colorful and happy pictures.  She was teaching us how to read and the book she was using had three characters: “Sally, Dick and Jane.”  I never really caught on to the reading part, but I loved the pictures and I can pretty confidently state that those images have affected my art ever since.
I was in the last first grade class to try to learn to read using Sally, Dick and Jane.  This system of sight word reading had been in use since the 1930’s but was in massive decline in popularity by the 1970’s.   I vividly remember my one-year of instruction in the method, but I still did not learn how to read.
I failed first grade.
The next year my teacher was named Ms. Harmon. She had short brown hair and suffered from a boil on her neck.  She tried to teach us how to read in an over-flow classroom in the basement of the school next to the boiler-room.  It was very dark in the room and our windows showed a view of the asphalt on the surface of the playground. She was teaching us using the P-H-O-N-I-C-S method.  She used books illustrated with the abstract flat art styling’s of the 1970’s.  I found the instruction in two different methods in as many years terribly confusing.
I still did not learn to read.  In second grade they put me in a learning disabled group, back when that was a very bad place to be.   So, mostly I spent my time drawing.  I tried to create story pictures as beautiful as my memories of Sally, Dick and Jane.
All of these memories came to me as I thought about the jacket design of Jane Sarasohn-Kahn for her place in The Walking Gallery.  This is her jacket: “See Jane Think.” 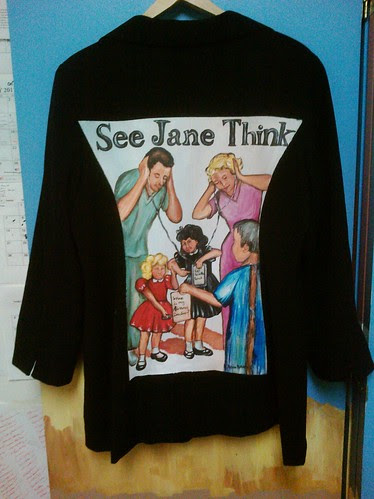 Do you know Jane?  She tweets as @HealthyThinker on Twitter and blogs at Think Heath and Health Populi Blog.  She is an amazing patient advocate and I have been honored to see her in action moderating panels, micro-blogging and speaking in the past year.  Often she is doing all three at the same time.  She is a powerful connector with an amazing network.  And though she often cuts through idle chatter in HIT circles like a hot knife cuts through butter, she does it with a sense of grace and dignity that leaves her with friends and supporters rather than enemies and detractors.
So within her painting, I paint Jane in the center wearing her signature black clothes.  She is Jane the child in this image and she will teach you how to read… data sets and patient stories.  She has her I-pad before her and she points to the phrase “Let Patients Speak.”  Plugged into her I-pad are two sets of ear buds and two practitioners are listening with a gentle countenance to the recording on Jane’s device. 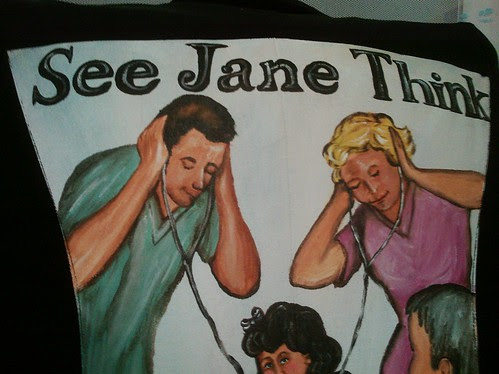 Beside Jane, stands Sally wearing a red dress.  She holds a smart phone and is ready to use mobile health to improve care outcomes.   She stares at the patient in the foreground.  Here stands Dick.  He is both and old man and a child within the piece.  He holds out a paper asking, “Where is my advance directive.”  This patient represents Jane’s own father who lived hours longer than was his wish.  You see Jane’s father had signed an Advance Directive specifying no intubation, but the Doctor on duty could not find that piece of paper.  So Jane’s Father suffered needlessly, as did the family, from the want of an accessible medical record. 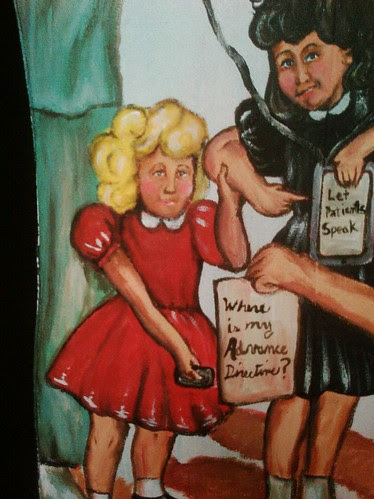 I bet Jane’s Father learned to read using Sally, Dick and Jane.  Perhaps he was one of the first classes while I was in one of the last. But in all the decades between we are connected by stories.  When Jane wears this jacket I am sure she will continue a grand tradition of creating higher literacy levels while using clear phrases and simple words supported by crisp illustration. 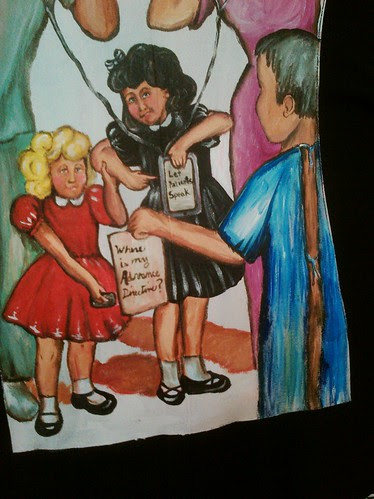 She is helping us tell a story, and I know at Health 2.0 I will be overjoyed to see Jane think.  Not long after finishing this jacket I received an email from Deb Linton at Health 2.0.  It was presented as concisely as any Sally, Dick and Jane book.  I hope to see you there...
Register for San Francisco's Patients 2.0 this weekend 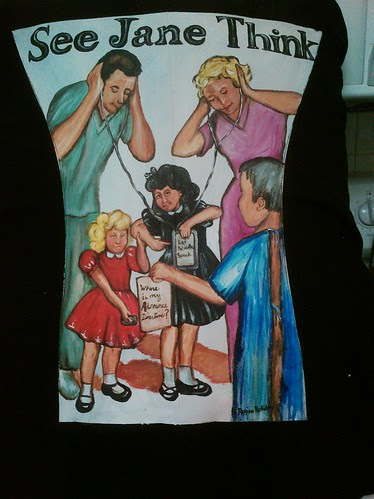 Posted by Regina Holliday at 8:49 PM