On Tuesday I had the opportunity to speak at AHRQ for the first time. Their annual conference was held once again in The Marriott conference center near the White Flint Metro Station in Rockville. I realized I had been there once before. This was not the confused deja vi of a weary conference traveler, I seen Ted Eytan speak here a year before.

The Marriott had a sort of creepy sleepy stillness about it. It did not help in the least that I had just watched the most recent episode of Doctor Who: The God Complex. That episode was set in a hotel decorated with the same type of eighties opulence as this Marriott. Within that episode, each room contained a personal horror designed to break the faith of each unexpected guest.

In this hotel, attendees walked by leisurely as they chose which presentation to attend from the multitude of those offered. They opened doors, they walked within and disappeared. I paused, glancing at the different signs looking for my room. Whilst wondering if little Miss A should enter track B, Jon White found me. Jon works for AHRQ and had invited me to take part in his panel. Cell phone in hand, he gestured his awareness that I was present and then rushed away. His team member Heather soon appeared and began guiding me to the presentation room.

En route we ran into Ben Miller, also known on twitter as @Miller7. It was so exciting to meet such a great social media voice in real life. His physical person is as slight and lively as his twitter voice. I offered to paint his jacket immediately, but as it was a full matching suit with vest he declined in favor of continued marital accord.

I really enjoyed presenting with my panel. We had a nice size crowd in a small room. Though we presented at 3:30 in the afternoon, I did not see the tale-tell head jerk of the the seated sleeper. Ron D Hays and Keith McInnes had such amazing information to present about CAHPS questions relating to HIT questions. It was an honor to follow their thoughtful presentations. As the session ended, Ben asked me to come back the next day to attend the 3.5 hour town hall on mental health.

I said I would attend, and I would paint. 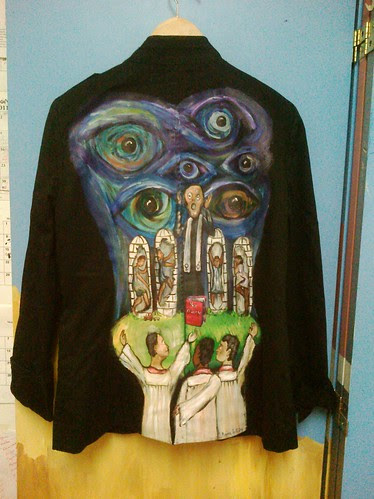 After bundling both of my children off to school, I lumbered, French box easel in hand, back to the Marriott. I had been assured that there would be space for me even if it were standing room only. I quietly let myself into a room as large as a grand hall. 300 seats were arranged before a the stage. A selection of speakers including Dave DeBronkart sat upon the dais A film crew was filming every moment as the event was being live-streamed.

There were only 49 attendees seated in the audience.

I was dismayed. As set up my easel dismay turned to anger. I felt as though I should check my vision and compare my expectations. I quietly removed myself and peeked into the next great hall. Here the room was full. I walked away and reentered our room. The empty one, the room whose empty chairs gaped like the holes within a lotus pod. Furiously I began to paint.

This is Katerina's Jacket: The Stream. 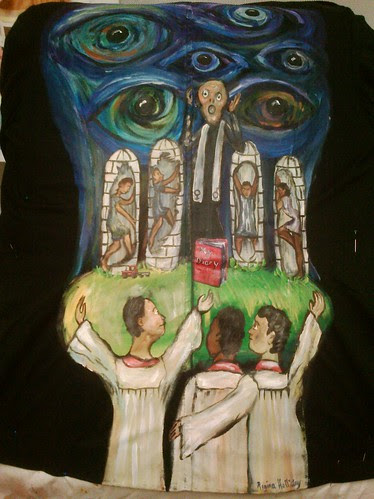 I can assure you that if Katerina Jackson-Suchkova had been in charge of that session every seat would have been filled. Katerina works for Lifetime Health Diary. It is a PHR company that contains and aggregates years of personal health data and uses a personal visual health construct on each users landing page. I love it, it actually has a picture of health.

I got to know Katerina when she organized a round table on health in DC. She was brilliant and had such an organized mind. She put together an excellent panel that day.

But this was another day, at other panel and I was painting eyes. The back of Katerina's jacket is littered with eyes. They fold blue within blue, the swirling tones of facebook and twitter look upon the viewer; for this is the stream. These are eyes of the countless viewers who watch the stage while far away in some other room. 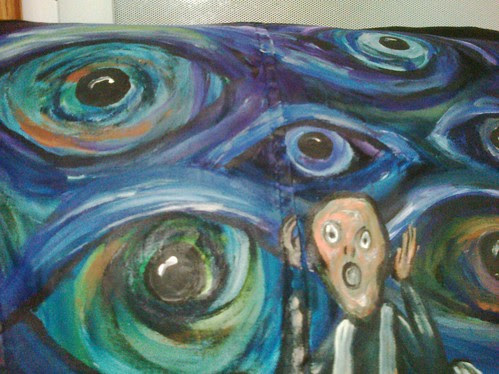 Below a sky of eyes, the green grass is a horizontal capsule. How can we talk of mental health without bringing up the subject of drugs? Sprouting from the capsule are four silos. Each silo contains a figure garbed in a short and straining patient gown, trying desperately to escape. 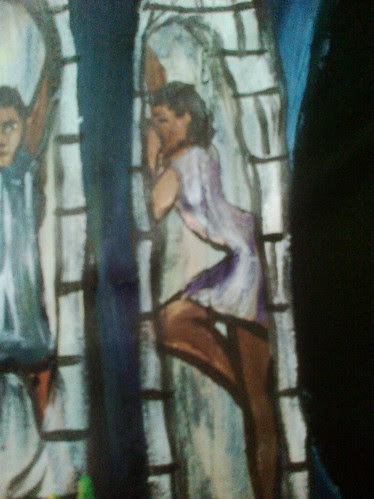 In the center stands the epitome of fright: the Scream figure by Edvard Munch. He yells at the viewer while wearing vestments arrayed upon his gown of black. The vestments are embroidered with scientific symbol for male and female. He is speaking to all of us while he preaches to the choir. 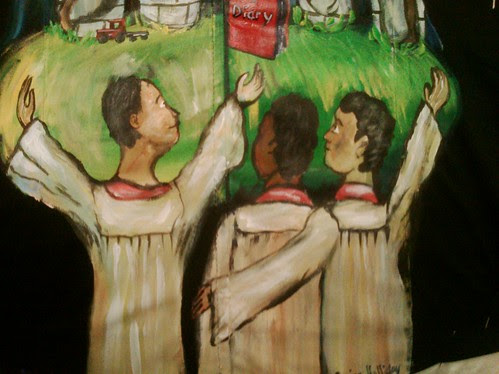 Below the frightened figure, the choir raises their hands in concerned praise. They agree whole heartedly that we need to have more transparency in mental health between patients, providers and communities. But the choir is so very small.

Finally the saddest part, the part that makes this Katerina's jacket. A doctor on the dais recounted a tale of a young lady who took her own life. "She seemed so happy" he said. But then they read her diary. They read her words of all consuming anguish stemming from her infertility. 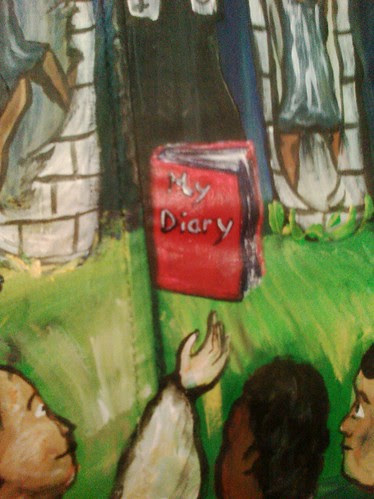 If only they could have read her diary before it was to late.

Do you see the life-saving beauty of an online health diary? As a widow who has data-mined a year of her own late husband's Facebook status lines, I can attest that the words we write are powerful things. They are powerful for the individual and for the aggregate. They show us patterns and mark the tide of years.

Can you imagine a different ending for the lovely lady with such a diary? Can you see her enter another room that does not end in broken faith?
Posted by Regina Holliday at 9:41 AM