My husband Fred had a favorite story about John Ford, and Steven Spielberg told the tale. The story was an account of the day that Steven Spielberg met John Ford.
The story went something like this. Steven was really young and had been making a few super 8 movies and he had the opportunity to meet John Ford in his studio office. After waiting for about an hour, Mr. Ford came in and Steven Spielberg began to speak with him for a few moments. Mr. Ford said, “So, you want to be a picture maker.” John Ford then gestured at a series of pictures on the wall. He asked Steven to describe what he saw. Steven started to describe the Native Americans and objects within the picture. That was not what John Ford was looking for. “No, no, “ he said. “Where is the horizon?” Steven said that it was at the top of the frame. Mr. Ford asked Steven to describe the next picture. Again Steven began describing the Calvary and elements, and again Mr. Ford was frustrated. “No, no. Where is the horizon?” Steven looked and said, “It is at the very bottom of the painting.”
John Ford said “When you are able to distinguish the art of the horizon at the bottom of a frame or at the top, but not going right through the center of the frame, when you are able to appreciate why it is at the top and why it is at the bottom, you might be a pretty good picture maker. Now, get out of here.”
That is a great story and Fred would tell it to his college film students and I would tell it to my pre-k art students for years to come. I loved that story because it makes it very clear that the angle from which you view things has an effect on how you view things.
This idea was reinforced yesterday at Isaac’s follow-up doctor appointment at the new Kaiser Permanente building by Union Station. He was meeting with a Nutritionist and was sitting in the waiting room section for internal medicine. Within the space, a kiosk had been placed to go online free of charge. Isaac walked over. He was very excited to find an accessible computer, but was quite disappointed when he tried to use it. The angle of the screen was set and fixed at an upward facing position. Isaac tried to adjust it as he would at home on our Mac, but the screen would not budge. He walked away his shoulders slumped.
Isaac had just been placed at the bottom of the frame. 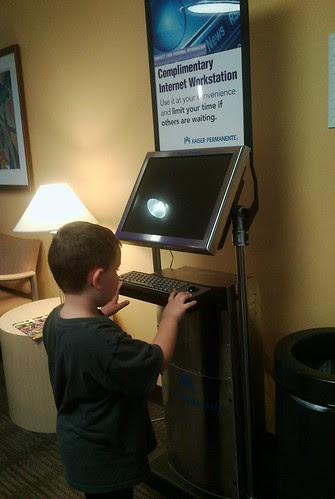 I thought of all these things in relation to the jacket I was creating for Andre Blackman. Andre can be found on twitter as @mindofandre . He writes and speaks about the power of new media, social media, health 2.0, public health, mobile health and disparities. He sees a new future where the old tools of public health 1.0 are discarded and the power of Health 2.0 embraced.
So, I painted a new vision for Andre, a lady Justice for our time. This is “SOCIAL media JUSTICE.” 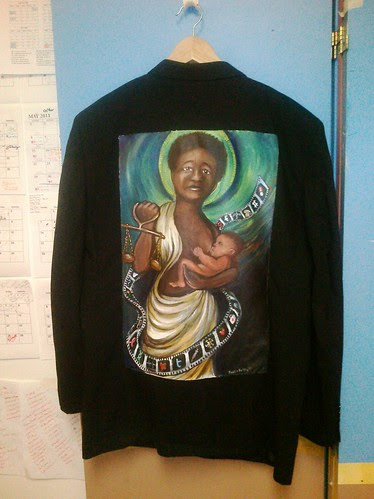 In this painting, an African American woman stands proudly. In her right hand she holds the scales of justice and in her left a suckling babe. A halo of binary code encircles her head and she is wrapped round within a golden cloth. Twisting around and behind her is a segment of film depicting icons from health, our life and social media.
Look at how she hefts the scales. This is not a dainty Roman deity with her hand lightly holding a tool of measurement. No, this lady hefts the scales as a weightlifter would, for justice is heavy. She looks unflinchingly down upon us, as she is slightly elevated within the frame. She is real and powerful. She is far removed from the artificial beauty that is often slathered on the faces of young women in our world. She is our future and represents all the wonderful regular people/patients who are joining a worldwide conversation on health. 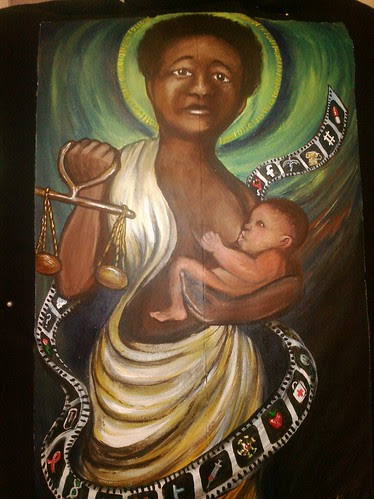 The babe in arms suckles in contentment in his mother’s embrace. He feels safe and secure, held by an arm that so often holds a sword in other depictions of justice. Why a babe and not a sword? We must change the way view problems and populations. Our tangled healthcare web is not a Gordian’s knot to be sliced through. It is a tapestry, now tangled, that must be rewoven upon the loom. 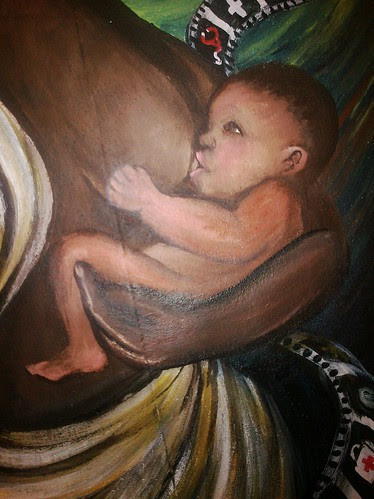 What tools will knit our raveled sleeve of healthcare? Twitter, Facebook, e-patients, new apps, and old medicine are tools we use combined. We must activate doctors, playwrights, musicians and techies and splice them onto the same reel. That is how we heal the child. That is how we heal ourselves. 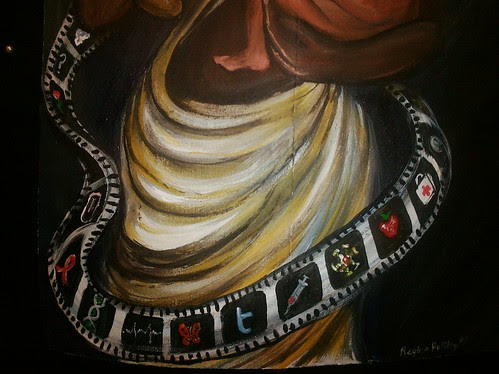 Only by working together can we create great change. By finding and embracing this concept of Justice, we can set a new horizon.
Posted by Regina Holliday at 10:56 AM