When I attended e-Patient Connections last fall I met an amazing and diverse group of people.  There were techies, patients, representatives of the pharmaceutical industry, doctors and even a comic book writer amongst the attendees and speakers.  I painted the entire time I attended the conference and it was the first time I painted onsite.  I must thank Kevin Kruse for his great suggestion that I paint.  While I painted in conference attire, a very nice man introduced himself as Craig Lipset and he told me he worked for Pfizer.   He added that Pfizer had an office in New York that showed art on a regular basis and he would inquire to see if they could show mine.
A few weeks after the conference, Craig contacted me online to inform me, alas, the Gallery was booked through 2012.  And that is all I heard from Craig until the night he attended The Walking Gallery on June 7th.  He was quite taken with the many wonderful jacket stories on display.  He asked if I could paint him one as well.  I was feeling quite joyful and tired that night and smiled at him, telling him of course I would paint a jacket for him.
A few weeks later he emailed me asking if the offer was still on the table, or had I offered to paint while infused with the good intentions of wine and exhaustion.  Once again I told him, Yes, I will paint your jacket.
But which story should I tell?
Should I tell his patient story?  Should I tell the world about his life as new father in 2006? He had a lovely baby and a very bad cough.  Now, many new parents do not get enough sleep, but Craig coughed so much he could not lie down to sleep.  After visiting a doctor and undergoing 9 months of tests: 2 chest CT’s, 2 PET scans, 2 Cardiac MRI’s, 3 pulmonary function tests and 3 holter monitors.  Craig was diagnosed with pulmonary sarcoidosis.  He now has 50% lung function and is fairly stable.
Sarcoidosis, that sent chills down my spine.  I painted a Walking Gallery Jacket for Leroy Jones depicting his mother’s 20-year struggle fighting sarcoidosis and was aware of her eventual death from the disease.  I knew Craig had quite a personal story to tell.
But, that is not the focus of this jacket.  Instead of focusing on his personal story he decided to focus his jacket in engaging patients as participants.  Craig’s work has been about enabling two-way sharing of data with patients for research.  As Craig states, “We have historically treated the patients that participate in research as “subjects”- we look at them, assign them a random number, we remove any identifiers and we extract data from them to put into a data base.”


This is Craig Lipset’s Jacket: “Subjects.” 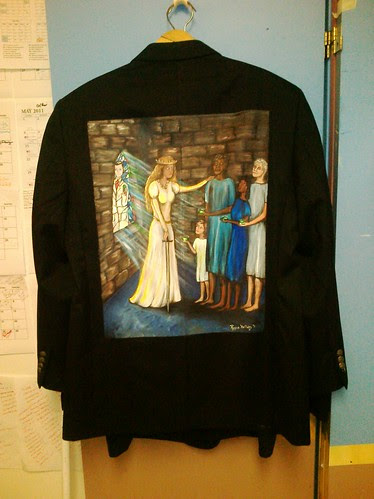 This painting is homage to another's work entitled “The Accolade.” Edmund Blair Leighton painted "The Accolade" in 1901.  He was an English painter that specialized in the medieval genre and his painting has become synonymous with the process of being knighted.  In Leighton's painting, a Queen with sword in hand bestows a knighthood upon a kneeling subject. 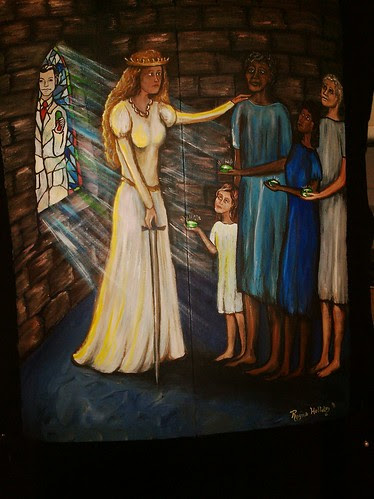 In “Subjects,” the relationship has changed from a depiction of ruler and subject to an exploration of care among equals.  The Queen has dropped her sword to her side and her other hand rests on the shoulder of a patient as she looks at him at eye to eye.  Other patients/subjects gather round and each appear to be offering a green button to the Queen. 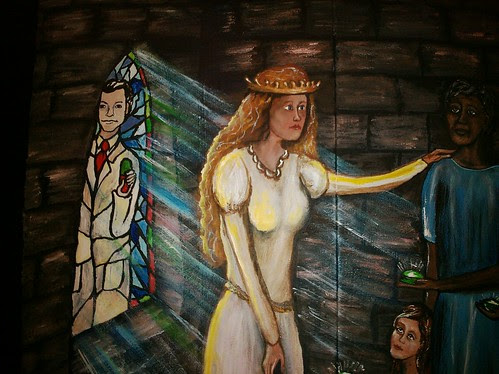 This is the Green Button Download.  This is the concept that I, the patient, can share whatever health information I want.  It can be scrubbed or not.  I share this with you to help others and aid in the aggregation of data.  And all I ask of you, is that you do the same for me.  I ask you to share the data and conclusions that you have reached.  I ask that we come to the table as equal partners in patient care and I will share with you.  I may be dying, I may be well, but let's crowd source this.  Let's put this in the cloud, let's open up my data set and that of all my willing brothers.  Let's code-a-thon tell dawn and make greater strides in hours than is often seen in years. 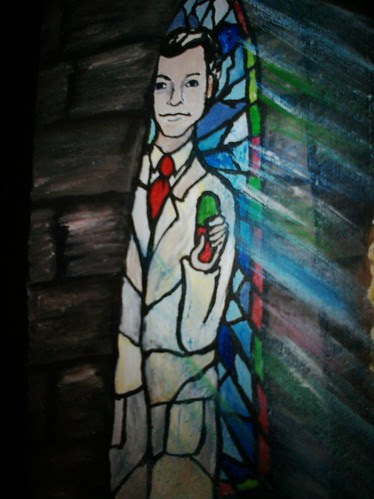 Do you see that dawn breaking through the stained glass within this picture?  Do you see Craig, sacred and still, holding a pill where his heart resides?  Here is the new tomorrow shining through the colors of the rainbow button initiative. Here the blue button combines and grows.  It spawns green for sharing, red for selective privacy and white for directing your data.  Where this light falls, health is revealed and shadows melt away.
We are no longer subjects.  We are partners in care.  Let patient’s help, that is all we ask.
Posted by Regina Holliday at 10:41 PM