I rose early on February 23rd and weighed down with luggage and painting gear trudged through the hotel lobbies and casino floor to the room in which I would be presenting my speech at HIMSS.  As I walked along, I noticed that the man in front of me had the tailor’s tacking stitches still in place on his suit.  I mentioned it to him and he thanked me profusely as he wanted to make a good impression that day.  Not long after, a woman mentioned to me that my large backpack was causing my skirt to rise in the back.  I readjusted skirt and bags and thanked her.  My son would say that’s karma.  I would say it is taking care of one another.

I was so excited to see many members of the gallery filing in to attend my session and was uplifted by their well wishes
As I arrived in my presentation room, I said hi to David Collins from HIMSS.  Then immediately began setting up my easel to paint that day.  I was the first Keynote in the session called Leading From the Future. Fellow Walking Gallery member Donna Scott introduced me.

View more presentations from Regina Holliday
I presented my speech combining together our personal patient story with the world of HIT using icons of pop-culture and images of art.
The next keynote was Regina Benjamin, and I painted her Journey to Joy.
Soon there was a break for lunch, which I enjoyed in the company of Mary Ann Sterling.  Then I ran over to the room where Todd Park was supposed to speak, as I wanted to hand him his gallery jacket. 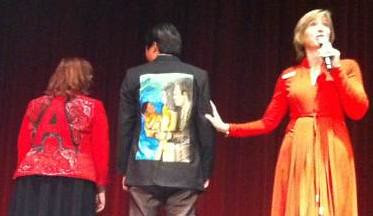 When I arrived I saw Wil Yu from ONC speaking with HIMSS Staff and I asked if I could hand Todd his jacket backstage. 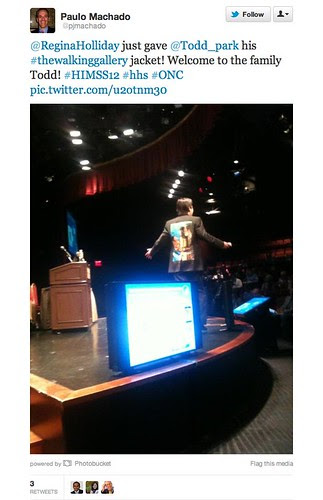 They thought it would be even better if I handed it to him onstage.  So I surprised Todd with his jacket right before he began his speech.  It was a beautiful moment.  Then I went back to paint the next panel at in the Leading From the Future venue.
I began the painting “The Island of New Jersey” based on the presentation "Creating a Framework for Patient-Centered Health Information Exchange."  Linda Reed, RN, MBA, FCHIME, Vice President/CIO, Atlantic Health System, Robert Irwin, CIO, Robert Wood Johnson University Hospital and Lou Hermans, VP & CIO, JFK Health System delivered this presentation. 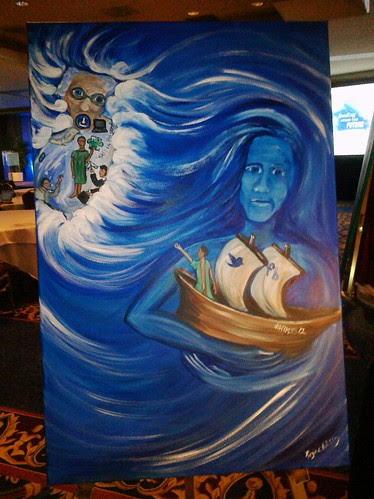 I listened to member after member stress the name New Jersey far more than the concept of HIE (Health Information Exchanges) and so I began to paint a lonely island.  The focus of the speech was supposed to be: “The exchange of health information is important to our healthcare system, but more important still is helping patients become engaged, active participants in their care. As organizations exchange information, how can they ensure that the patient remains at the center of the HIE?“
Well, that was supposed to be the focus… 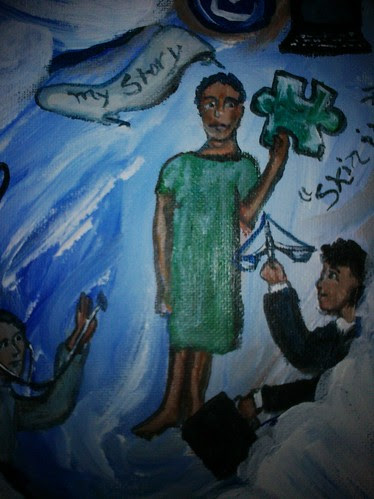 I began by painting a patient in the center of the island.  He looks slightly worried and is holding a puzzle piece.  He is the missing piece of the puzzle of HIE.  The panel spoke of the importance of e- prescribing, and coordination of the care team and so I began painting pills and doctors.  Then they spoke about the importance of some kind of patient portal and I painted a laptop computer, the blue button symbol and a scrolling patient story.  One member stated that patients could provide another set of eyes if we just let them see the medical record.  I painted a set of eyes to represent this concept.
Soon Q & A began and things got really interesting.
Ileana Balcu or @yogileanna asked questions from the audience about the poor communication of the current system.  The panel answered broadly suggesting portal solutions for facilities in general.  Ileana then made it very clear that she was a patient in New Jersey using their system and it did not work well.
The conversation devolved into a conversation about legal ramifications of data sharing and a lawyer entered the picture.
Then a member of the panel uttered the phrase I absolutely detest: “Patients need more skin in the game.”  So I wrote that phrase upon the Island of New Jersey.  Then I painted skin.  I painted skin around the eyes above and surrounding the blue button.  Now it seemed as though the blue button was less of a portal, than it was a ball gag wedged between the lips of a patient.  It is not enough to pour data into us; we must be able to respond back. 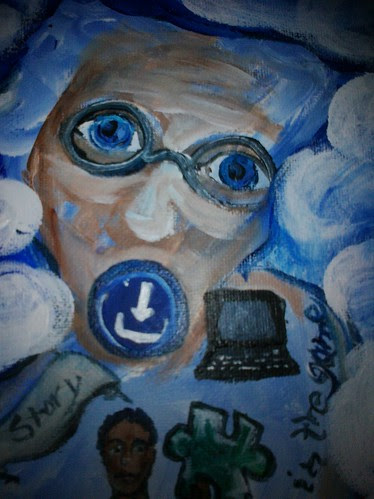 An HIE must function as an exchange between provider-to-provider and patient to provider.  The data waves pound upon the Island of New Jersey and surround it.  How will it communicate with the outside world filled with patients?

He described a new concept called AEIOU a recipe for engagement.  Actionable, Easy, Immediate, Open and Unobtrusive. So in the painting I created #HIMSS12, a ship of social media propelled by the twin sails of facebook and twitter.  Upon the ship a patient reaches out to the island of New Jersey and tries to communicate.  The ship is embraced by the data waves.
Finally Rick Skinner, VP/CIO of Cancer Care Ontario, Cancer Care Ontario finished the day by telling us about healthcare providers who are engaging their patients through social media and other strategies.  Then the attendees filed out of the room.  I spent the next hour finishing the paintings as the tech team worked around me on the next day’s presentations and the custodial staff threw away the detritus of a conference.  Around 6:30pm I cleaned my brushes and said good-bye to the nice fellows running the sound system.  I was alone with my luggage preparing to spend an evening in the airport before my red-eye back to DC.
Then Antonio Fernandez from the Puerto Rico REC called me.  He asked if I would join the Puerto Rico team for dinner. I said yes and we had a lovely evening talking about what health is all about: friendship and community. 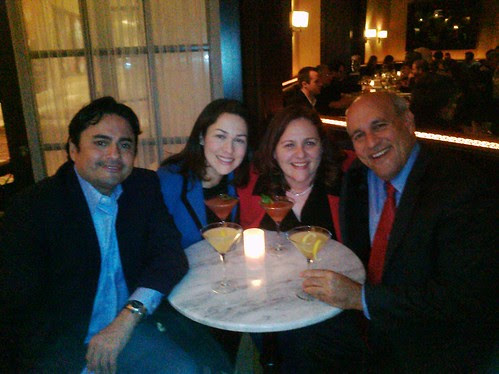 Posted by Regina Holliday at 2:21 PM