Out of Reach: a jacket for JoAnn Klinedinst

JoAnn Klinedinst strides tall through the corridors of HIMSS.  She is the Vice President of HIMSS Professional Development.  She is accomplished and muti-talented, able to compose works of great beauty with the keys of a computer or the keys of a piano.  She holds multiple degrees, and not much in life is out the reach of JoAnn.  But this was not always the case.
This is JoAnn’s jacket for the Walking Gallery: “Out of Reach.” 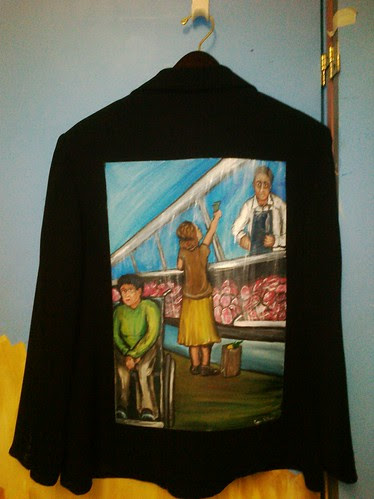 When JoAnn was a little girl she ran and played like other girls.  When she was nine years old her stable world was rocked with a diagnosis. Her mother had MS.  JoAnn’s mother was only 38 year old and terrified.
When JoAnn was 11 her mother could no longer walk, and she was confined to a wheel chair.  Little JoAnn had to take on adult responsibilities.  Her father worked during the day and cared for his wife at night.  JoAnn would do the cooking and cleaning and the shopping for the family.  He mother would send her to the market to get cheese and meat.  The counter would loom high above her and she could not see over it. 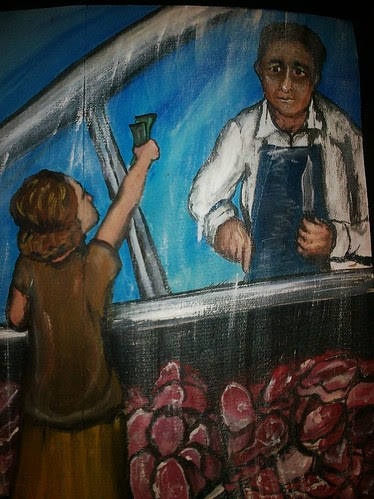 There I stuck her in a painting. 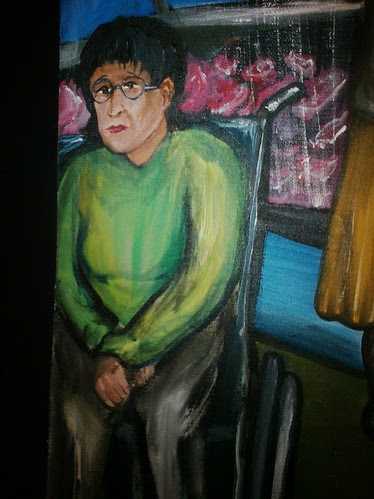 She is always reaching and is too small, whilst her mother’s shoulders hunch in sorrow for her little girl.   This was not the way it was supposed to be.  JoAnn should have her parents at her side.  The mother should walk with pride those few steps to the counter.  The world should be a brighter place of with sunny years filled with school concerts and two parents clapping in the audience.
But that is not JoAnn’s story.  Her story is standing tiptoe to reach up to a counter and returning home to mother who cannot do all the things that mothers do.
The years past and JoAnn married at 19 with her mother’s blessing.  “Go, live your life, “ she said.  JoAnn moved to Chester County, PA and she went to college.  After four years she graduated and both her parents attended commencement exercises.  JoAnn was so happy.
The years went by and JoAnn had two children of her own.  She would gather up the children and “Grannie” for field trips to the Mall.  Toward the end of Grannie’s life, she was confined to a nursing home.  Her body was now paralyzed but her mind knew no bounds.  It would soar, her beautiful soul brought joy to all those around her.
JoAnn’s mother left this world on April 11, 2008.  She left a prison of pain and paralysis.  She left a little girl, now a woman grown.  She left a little girl who could play a piano.  She left a little girl who loved her so.
That little girl walks the halls of HIMSS inside a woman’s body, and nothing is out of reach for her. Nothing.  And she will dedicate all her days to helping little girls and mothers in their patient journey and she will do it with the music of data.
Posted by Regina Holliday at 5:37 PM