When my husband Fred was sick we met with quite a few doctors.  At the first hospital there was a doctor that seemed very nice.  He was the internist. He would talk with Fred frequently.  And Fred really liked him.  They were the same age, and both had three-year old children.   I suppose I will call him Dr. Mango.  One day as I begged him for in-depth information, he said that I was not behaving typically.  I should be in a corner crying, like his wife would do if the situations were reversed.  I stopped writing down notes.  I said, “Dr. Mango, you really don’t know anything about me.  You don’t know what has happened in my life and no idea what I will do to protect the ones I love.”
Three weeks later on the day we left the hospital, Dr. Mango came to see us.  He told me the transfer didn’t make sense.  We weren’t going to a higher quality hospital.  We were making a “lateral transfer.”  I said it did make sense, if you were trying to get a second opinion.  Dr. Mango then shook his head sadly and then went to sit with Fred.  His shift was over and they talked of their children and of books they had read.  Dr. Mango promised to visit Fred and said someday we would have a picnic with all of our children in a park.  And then he left.
Weeks later, when I sat at Fred’s side in hospice, he turned to me and said, “Dr. Mango lied.  He never came to visit.  There will be no picnic.”  No, often life is not a picnic.  And I could not help but think Dr. Mango has not had the kind of life experiences I have had.  He has not suffered through the kind of events that teach you to be true and brave and courageous.  No matter how small or disempowered you are.
When I was in fourth grade, my father killed a man.  He got into a late night knife fight in the parking lot of the Sapulpa flea market.  Tendons were severed in his hand and his gut was ripped open, but he won the fight.  He drove himself to Bartlett Hospital, and as he was somewhat delirious with blood loss, he entered through the employee entrance.  This wasn’t actually too odd, as my mother worked there as a housekeeper.  He was used to this door.  He left a blood trail all the way to admissions, whereupon reaching triage they decided to life flight him to St. John’s Hospital in Tulsa.
The next morning was Easter Sunday. My mother went to work and mopped up a corridor filled with blood, not knowing it was her own husband’s.  While she was doing that task, I was hiding Easter eggs in the back yard.  The phone rang, and my grandfather bade me to answer it.  I did and it was Virginia Beaverson, the nice lady who ran the flea market.  She said, “Honey, I got some bad news.  Is your momma there?”  I told her no, and she proceeded to tell me that there and been a knife fight overnight and that my Father was badly injured and the other man was dead.
I hung up the phone and told my older brother and little sister.  And we waited.
Over the next few days my father had multiple surgeries to save his life.  The teachers in school told my sister and I that they were praying that he would make a fast recovery.  But my sister and I could not do the same.  Dad had been abusing us for years.  So even though we loved God and wished to do his will, we could not pray that Dad would have a fast recovery.
Our father eventually recovered and went to jail for several months.  I must say those were some of the best days of my childhood.  He was tried and convicted of manslaughter, which is a felony. He could no longer vote, be part of a jury … or buy a gun.
Which is why I shot and purchased a gun at the age of twelve. 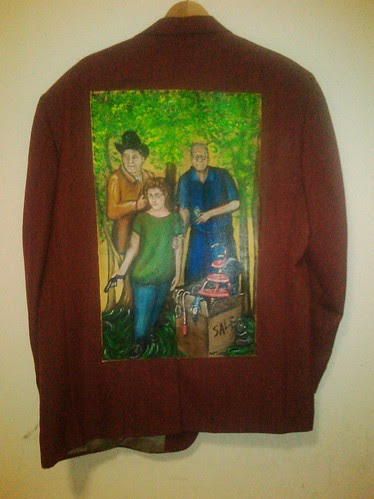 This is Ladd Everitt’s jacket for The Walking Gallery.  It is entitled The Gun.  Ladd Everitt is the Director of Communications of the Coalition to Stop Gun Violence.  In this position, he is responsible for developing and managing a wide range of communications activities in support of the organization’s overall mission. Ladd also serves in a volunteer capacity with the D.C. Crisis Response Team, a group that offers comfort, support and referral services to victims and survivors of homicide in the District of Columbia.
Ladd relocated to the District of Columbia from New York in September of 1993 to pursue a Masters degree in U.S. Foreign Policy at American University.  And that is how I met Ladd way back in 1994 as a friend of Fred’s.  He was fun and boisterous and generally a great guy.  We lost touch with him over the years.  Then Facebook brought us back together, just as Fred was becoming ill.  Ladd had remained my friend in the ensuing months after Fred’s death.  As I became more deeply invested in social justice, patient activism and public health, I became very interested in the work Ladd was doing in DC to stem gun violence.   I invited him to speak at Social Justice Camp in January; he presented a stirring speech on the subject.
I asked him to participate in The Walking Gallery and told him I had a story to share. 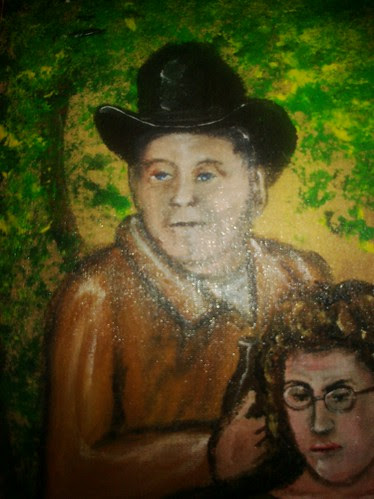 When I was twelve, I was working in the flea market stall, when my father came over with a man in a hat.  They told me to step into the woods with them away from the traffic of the booth.  I was very frightened.  No good can come from stepping into the woods.  My father said, “This man here is looking to sell a gun, and seeing how I am a felon, I can’t buy it.  But you can.”  I looked into my Father’s eyes and saw little crinkles of anger at the edges. 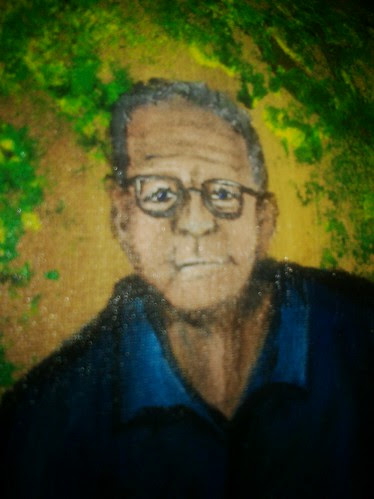 I looked at the man in the hat.  He handed me the handgun.  “ Now, careful darlin,’ it’s loaded.  Your daddy said you might want to try it out.  You can shoot it right over there into the ground.”
Now, I remember many things within my life with Kodak clarity.  The bowl of yellow cornflakes I ate with my grandfather when I was not quite two years old.  I still see within my mind the lovely red yarn that was tied to a present from Aunt Mabel when I was but five.  And I can close my eyes and see the graphite sheen of gun metal, as I pulled the trigger and shot the earth.   The gun worked.  My Father handed me the wad of bills and I bought a gun. 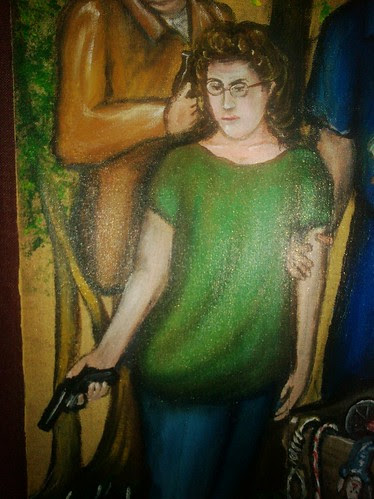 For the next five years, my dad would threaten to kill us with the gun I bought.  Each year he would sink deeper into alcoholism and violence.  By the time I was 17, I was certain he planned to kill us all.  That night he sat at the kitchen table drinking, and spinning the gun in lazy circles on the melamine tabletop.  My mother washed the dishes at the sink with silent tears running down her cheeks.  My 15-year-old sister tried to study, and I went back and forth doing the laundry.  He finally passed out close ten pm.  It was enough.  My little sister and I were going to run away.  I called a crisis hotline number from Katie and Angie Berg's house.  Katie and Angie had been my best friends in childhood. And from their house, I called a number I had saved since fourth grade, just in case things ever got so bad that we must escape. 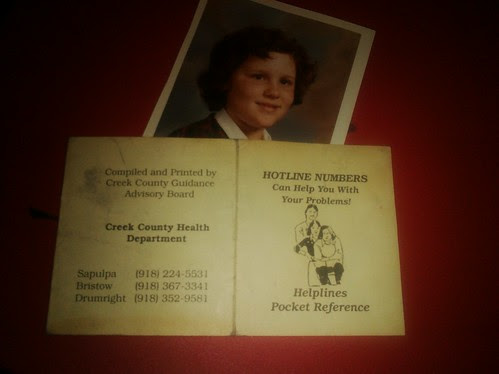 We were told to go to a local youth shelter. Our friend and fellow student, Robb Fulks, drove us to there. We spent a couple weeks there, and our mother had to choose between her daughters and her husband.  She chose us, and dad had to leave the house.  And everybody lived.  We spent the last two years of our youth in a home without the constant threat of violence.  Dad realized he needed to get in control of his alcoholism, and lived for ten more years.
Now, some folks might think this story has nothing to do with health, but it very much does.  There are the obvious negative emotional effects of living in constant fear and the physical marks from whips and beatings.   There is the public health concern that the 12-year-old daughter of a felon could buy a gun.
But most of all, when Fred was sick, the oncologist in charge of Fred’s case was as horrible to deal with as my father.  I did not escape one tyrant so many years ago to watch another let my husband die.  I was forced once again into the role of a victim.  We should not “complain” as it would only make it worse.  We should wait in silence for a treatment that never comes.  And only when the realization came, that death was truly eminent, when the gun began to spin, was I released from silence to secure our escape.
If I could leave one thought with you it would be this: there are patients and families throughout the country suffering in silence, and their suffering feels exactly the same as that of an abused child with a gun to her head. 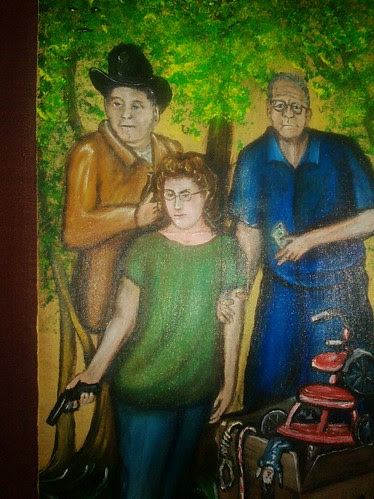 Posted by Regina Holliday at 10:34 PM