If you have ever seen me paint, you are probably quite aware I don’t tend to sketch.  I don’t believe in a do-over, and I do accept organic change within a piece.

I use pigment and brushes and look within, and then begin the painting.  My mind is sort of like that scene in Inception where the landscape changes and morphs into the finished design.   But before I design, I must SEE.  I close my eyes and look back and sometimes sideways or forwards, to find those pictures that create the image; that tell the story.  I see the images roll by like some kind of frantic calliope.  “That one,” I say.  “I will use that dart I played with as a child within this painting.  I will use those warm comfy socks upon her chilled and bloodless feet.”
And so I paint, often on site, within a swarming crowd or upon a city street or at a busy conference.  And I see them out of the corner of my eye: the watching ones.  My peripheral sight warns my animal mind of impending attack or possible collaboration.  My intellectual mind says all those reassuring things.  “Don’t worry they are only watching.”  Occasionally I will spin around upon those too close at hand.  My nose slightly flaring, my eyes dilated.  I see everything.
The eyes are so important.
Anyone who studies health and medicine must greatly depend on their eyes and the eyes of those they care for.  They depend on their vision to accurately diagnose patients and to foresee impending problems.  I remember Fred’s eyes before they closed forever.  Such beautiful eyes, when they looked at me through love, I could fall forever in those black depths. And they were such scary eyes when they constricted as tightly as a python through a haze of opiates.
Sometimes I focus on the scary eyes.  And that phrase heard on television time and time again echoes in my mind: “Pupils-fixed-and-dilated.  Pupils-fixed-and-dilated.” It rolls off my tongue, like letters recited by a child: “l-m-n-o-p.”  It has been said so often together that it has become one word.
But let us dissect this.  Pupils fixed: not responding to light.  Dilated that was nine days ago when Near Miss Mom gave birth to her baby.
For this is a jacket story.  And I want you to look into these eyes. 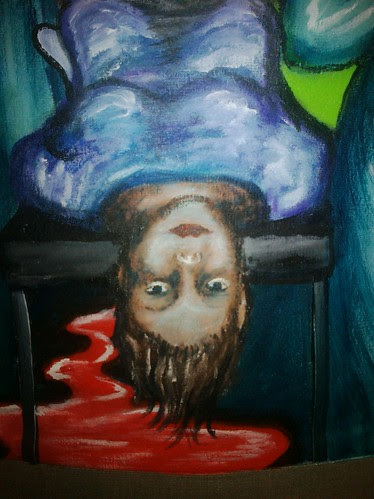 This jacket is a story of birth and consequence: the telling assisted by a midwife.  This is @midwifeamy’s jacket or as her local friends know her Amy Romano.
I met @midwifeamy on Twitter on September 14th 2009.  I enjoyed her tweets about woman’s causes and childbirth.  She is a powerful patient advocate.  I met her in real life about nine months later.  We were on the same patient panel at Health 2.0 Goes to Washington.  I told Amy I would blog my birth stories sometime soon.  But time and life got away with us and my Isaac’s story remained untold.
You see when Fred went to the first hospital where we fared so badly, I was already familiar with it, as I delivered Isaac there.   In January of 2006, I was trying to maintain my pregnancy.  I had begun pre-term labor before Thanksgiving, and was carefully watching for contractions.  My OB told me that as long as I drank water constantly and didn’t lift anything I should be able to make it to 36 weeks.
In late January, I woke to find Freddie sick and I needed to go to my OB appointment.  So I took the bus and then the train to my appointment, where I was told that I was beginning to dilate but had not dropped.  I took the train and the bus back home to find Freddie running a 104-degree temperature.  I called the pediatrician to make an appointment.  They fit him in that afternoon and told us he had a bad case of the flu.  While at that appointment I felt the contractions begin.  So we drove across town to the OB, who determined I had dilated quite a bit more, so he recommended I go to the hospital.
In rush hour traffic my worried husband and my sick little boy, drove me to the hospital where they deposited me on the curb.  I waddled in the hospital by myself and went to stand in the line for submitting insurance information.  After triaging me they said my blood pressure was too high to walk around as I had done in my last labor.  I was told to lie on a gurney in the labor triage as they waited for a room to open up.  After enduring few hours of ever increasing contractions with no relief via movement or distracting company, I was finally transferred to labor and delivery.  I had already made it vey clear during the entire process I wanted natural childbirth.
As I labored without my husband or a friend to advocate for me, I saw something from the corner of my eye.  A nurse was doing something. I whipped my head around and asked, “What are you doing to my line?”  She looked over at me nonchalantly and said, “I am adding pitocin to speed up labor.”  “No, you are not!” I said.  “I had my first son in five hours and I will have this one in less and don’t you dare touch my line.”  She left in huff and I was once again alone in the room.  Everything happened very fast after that.  Fred finally arrived, as my mother-in-law was able to drive up and watch our sick little boy.  Within thirty minutes my water broke and we had Isaac.  His face crinkled in dismay at being born and Fred immediately said he looked like a little old man.  Fred was right.  Looking at Isaac was like looking at miniature version of my father.
They took Isaac to the NICU, but he seemed to be doing pretty well considering he was barely 36 weeks.  Fred looked at me lovingly and said, “I brought you something to read.”  It was Stephen King’s book: Cell.  I loved that book, and I agreed with its premise and thought I would never own a cell phone.
The next day the NICU staff said they wanted to send Isaac home.  He was slightly underweight with an elevated bilirubin.  I was upset.  His brother was a 102 degrees and vomiting.  Our tiny one bedroom was completely contaminated.  I had not even been allowed home yet to clean.  The staff suggested we could always go to a hotel.  I walked away and called the pediatrician’s office.  A couple of hours later the NICU director told me, “I don’t know who your pediatrician is but she just tore me a new one.  Your son may stay for two days.”  I checked out and went home.  I ate some take out, expressed some milk and then began disinfecting the apartment, as my mother-in-law comforted Freddie and my Fred went back to work. 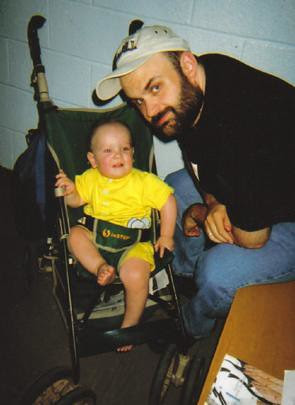 We brought home Isaac to a clean apartment and little Freddie wore a facemask for a few days to prevent infecting his new little brother.  That was our birth story, and though it was fraught with frustration it does not compare to the story depicted on Amy’s Jacket for the Walking Gallery. 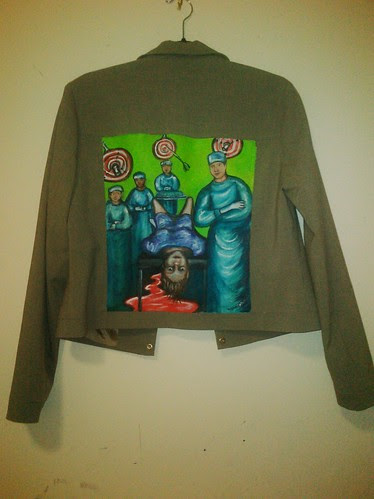 Near Miss Mom almost died.  She almost died after delivering nine days before because she almost bled to death in an ER.  She waited for an MRI and bled.  She waited for a pump to express her milk, and found there were no pumps in the ER.   Her friend left her side to go to a local drug store to buy a pump.  Then Near Miss Mom expressed and bled some more.  She bled so much that it welled above her thighs and filled her sheets, twice, while in the ER.  She bled so much it required 11 bags of blood to save her.   And she was awake and realizing all of this until it was almost too late.  And the last thing her eyes saw as she was going into surgery was the surgeon and nurses all lined up and staring at her.
This is the story delivered to me.  I had no pictures of the players, only Amy’s words to guide me.  I began to paint and I focused on the eyes.  Near Miss Mom’s eyes stare at the viewer as she is bleeding to death.  Her face is serene, as though there is so little energy left for the fight. 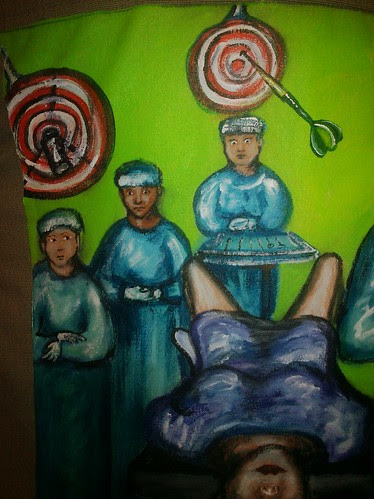 The lights above have become bulls-eyes and a dart is imbedded in one of them.  Below the dart, a medical practitioner stands behind a tray of tools.  His eyes are shocked and staring at the gushing blood.  Beside him stands another man, who seems to swallow in disbelief.  Beside him stands the woman, who eyes dart to the side as if laying blame upon the tall man to the right. 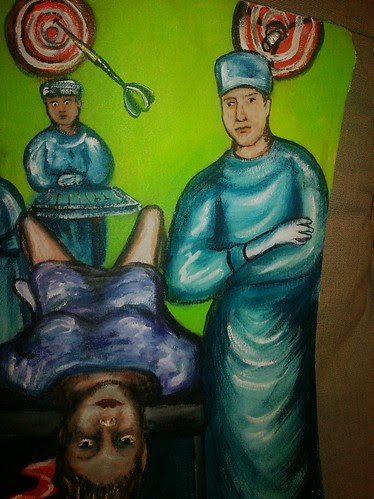 To the right the surgeon stands.  His arms are crossed defensively and he stares with uncertainty into space.  And anchoring the red bulls-eyes on the ceiling into the composition, the floor pools with blood.  And this blood is so bright, so present; it almost forms another player in the scene.
I dare you to make sense of this painting if you took the eyes away.  If those little blobs of white and dark were gone would this be the same tale?  The eye is a window to the soul.  I looked within and I saw Near Miss Mom.   And at The Walking Gallery I held her in my arms.  As our eyes filled with tears, I could tell… I had gotten her eyes just right.
Posted by Regina Holliday at 2:28 PM