On July 21st, 2007, I stood upon the sales counter at the toy store Barstons Child’s Play.  It was 11:45 at night and I was cloaked within a witches robe.  I was performing a dramatic interpretation of  J.K. Rowling’s Harry Potter and the Half-Blood Prince, the sixth installment in the series.  As I performed the dialog between Professors Snape and Dumbledore, I looked into the glittering eyes of the hundred plus customers who crowded every isle of our tiny store.  Then it was midnight, my performance ended, and the crowd grabbed the new book: Harry Potter and the Deathly Hallows. They had been on our pre-order waiting list for over two months and eagerly awaited their chance to begin the book.  We locked the doors and the staff and customers melted into the inky summer night.
Fred and I read Harry Potter and the Deathly Hallows very rapidly, mostly reading for plot.  Years later after Fred’s death, I would read it again.  It was an amazing book, and dealt so very well with immense journey one undertakes after the death of a loved one.   I suppose that is very understandable as J.K Rowling based a lot of Harry’s journey on her own experience with grief after her mother’s death in 1990.
Yes, Fred and I had waited eagerly for book seven.  But that was not the only book we were waiting for.  In October 2005 George R. R. Martin had published A Feast for Crows, the first in a two-part installment.  The second part A Dance with Dragons was supposed to be published in the summer of 2007.
That did not happen.
Harry Potter came and went, and still we waited for A Dance with Dragons.  And so passed 2007 and 2008 with no new book.  In 2009, Fred became very sick with kidney cancer and though he got to read the not yet published Stephen King’s Under the Dome, he did not get his chance to read A Dance with Dragons.  Just days before his death, he was still venting his frustration that George R. R. Martin had failed him in this.
And so it came to pass that this July 2011, both the long-awaited second part the film Harry Potter and the Deathly Hallows and the long-awaited A Dance with Dragons became available for viewing and reading pleasure of their dedicated and enduring fans.
And as I read A Dance with Dragons, I thought of Fred and the ceremony of bread and salt.  The ceremony of bread in salt is an ancient one that is part of the mythos of George R.R. Martin’s Seven Kingdoms and our own world today.  If you visit Slavic countries you will still see this ancient custom of hospitality.  For if I eat your bread and salt I am safe with you and yours and we have a pact of truce between us.  No one would violate such a hospitality pact, without risking the wrath of God.
So within this reverie of reading, I received an email from another kingdom asking me to speak.  The email came from Louise Schaper PhD in Australia.  She is CEO of the Health Informatics Society of Australia.  She said “About 2 hours ago I watched a TED talk by "e-Patient Dave" deBronkart and he mentioned you in his presentation.  Thanks to the wonder that is Google, I have now perused your blog, subscribed to your twitter feed and watched your talk at the Cerner event last year.”  She then asked me if I would be willing to speak at their event on August 1-4, 2011 in Brisbane, Australia.  I said that I was so sorry but would not be able to attend this year, but would love to next year.  And I said I would paint her a jacket so she could join The Walking Gallery.
This is Louise Schaper’s jacket: HIT Passion: Bread and Salt. 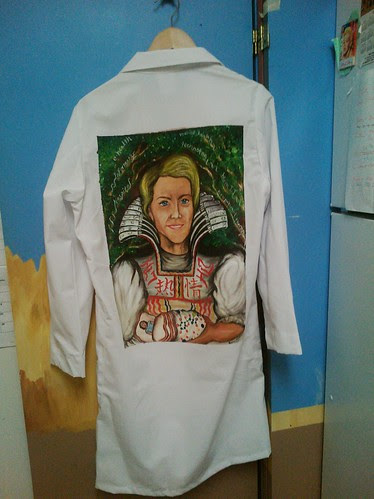 Louise told me a little about her personality and her passions.  She is a self-admitted geek so I hope my wrapping her story up within a tale of myth and fantasy is acceptable.  I saw her as the maiden in a tale.  I saw her as a participant in an ancient rite.  She is dressed in a modified Slavic gown.  Upon her breast is embroidered HL7 as well as the Chinese characters for passion. 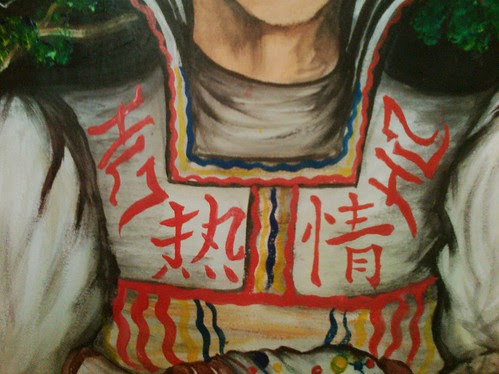 For Louise is passionate about informatics and data access. She told me of how even as a youth she had an analytic mind and loved typing crisp rows of information using her electric typewriter.  So Louise’s collar is set in type within this image. 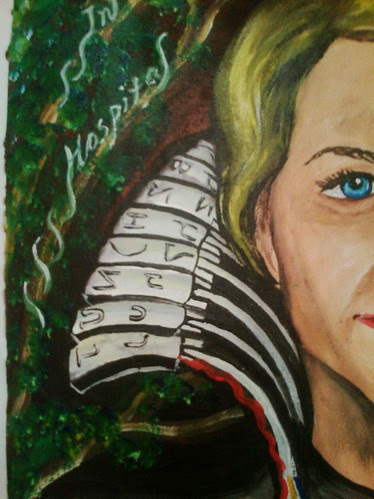 Behind her is a dark forest wrapped in letters and words like e-health and occupational therapy.  She comes out of that forest to offer us welcome.  She is carrying a loaf of bread.  But instead of a hearty loaf of homemade bread, this is a plastic wrapped loaf of Wonder Bread.  The bright dots of color upon the packaging form the structure of penicillin.  Sandwiched within the slices is a dying patient. 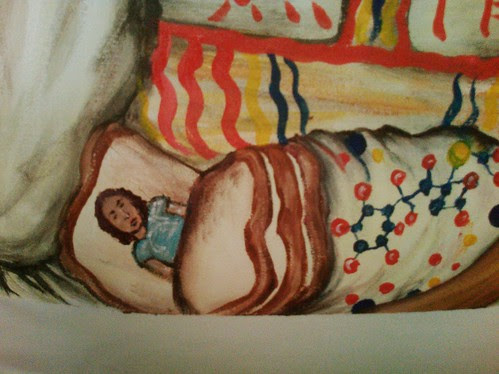 Louise’s cousin died while under anesthesia for a routine procedure, because the team that cared for her had no idea that she was allergic to penicillin.  This is the kind of thing that should never happen.  This is a breach of the laws of hospitality.  This is the kind of horrible never event that EMR systems are designed to prevent.
And so within my mind Louise represents one of the most important elements of the Game of Thrones book series: You do not kill the guest you have shared bread and salt with.
And Louise is passionate that it should never happen again.   And Louise knows the sorrow of J.K. Rowling and Harry Potter.  Sometimes we lose the ones we care for even though we dedicate our lives to that which is right, rather than that which is easy.

The month of July 2011 was a good month for geeks. We saw the last film of Harry Potter, we read the next book by George R.R. Martin, and many a self-admitted nerd made it Comic-con arrayed in their full Cosplay glory.  As they walked the streets flying their freak flag they did it with their peers.

Louise is wearing this, to a conference of her peers as the only Australian Member of The Walking Gallery.  Thank you Louise for being brave and for being passionate. 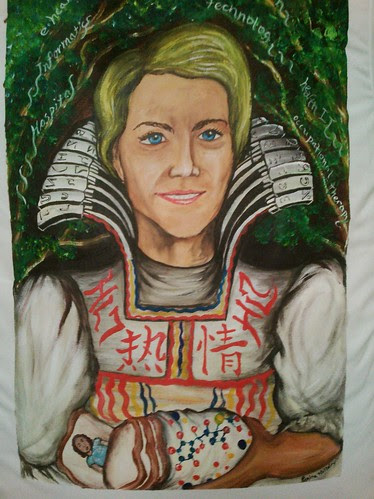 Posted by Regina Holliday at 11:59 AM