Do ever think of animals or fictional characters can well represent the personalities of new people you meet? 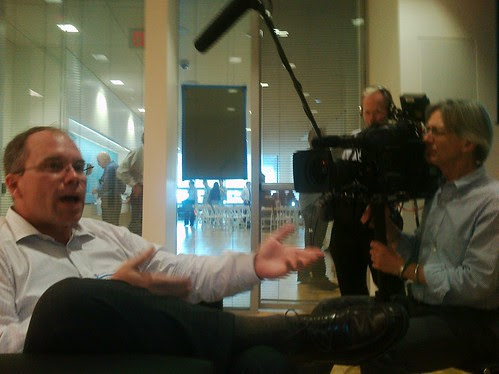 I often do.  It helps me remember them and their personality.   When I first met Matthew Browning it was on Twitter and I knew him by his description: Founder YourNurseIsOn.com, CEO Targeted Instant Communications, Inventor IntelliBlast Communications System, RN, MSN, FNP, Healthcare 2.0, Husband & Daddy, :-)  When I met Matthew in person I thought of the 1984 film: The NeverEnding Story.  In particular I thought of the character known as Rock-Biter.  This character is tall and strong with a deep rumbling voice.  It was a perfect fit for Matthew.
I have always loved that character for his kindness and his strength, but most of all for his sad perplexed look during the climax of the film when the nothing takes his friends away.  He explains that he tried to hold onto his friends, that he held them in his hands, yet the force of the nothing took them.  This mountain of a rock man looks down at his hands and says.  “They look like big, good, strong hands, don't they? I always thought that's what they were.”
This is the way I saw Matthew and until he told me his story I did not know why.
This is Matthew Browning’s Jacket: “Both of Them.” 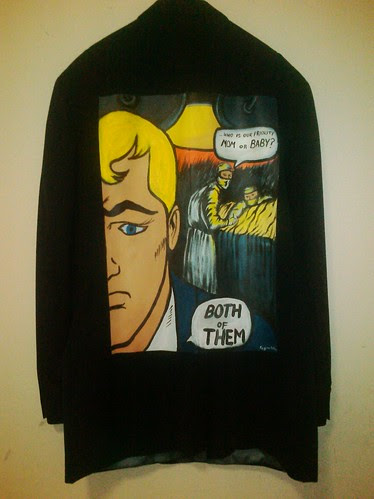 This is Mathew’s story:
“Just over 3 years ago, late on a Friday night in March, my wife- who was 31 weeks pregnant-experienced difficulty breathing while we were in Florida. We were on a "rub the belly tour," so that our families could celebrate her pregnancy and impending birth of our first child. Upon arrival to the local ER, we were informed that she was eclamptic and we would have to deliver our baby TONIGHT, right now, no delays! “Whoa!!! Hold on a second, you mean right now?” I said in disbelief.
The doctor came and explained that they needed to operate as soon as possible, the risks involved for my wife and my unborn son, and the real possibilities of very poor outcomes. I explained that our doctor in Connecticut would need to speak with this doctor due to my wife's rather complex medical history and significant risk factors.
They, the doctor and assistants, made every attempt to dissuade me about the need for that consult and the need for this doctor to review her medical history BEFORE operating.  I was resolute, and at 6am on a Saturday morning, we received a fax of my wife's medical record and two consults, one from her OB and one from her hematologist.  These actions likely made all the difference in our outcomes.
Phoebe's hematological risks complicated the procedures, planning and course of the emergency C-section needed to deliver our son in the safest manner possible. Proceeding without this information would have been very dangerous and likely life threatening.
Relieved that we had done everything we possibly could to ensure the safety of Phoebe and our son, I gave Phoebe a kiss and she was wheeled into an emergency c-section. As the doctor and I followed behind her, the doctor pulled me aside and said, "this is a very risky procedure with a complex patient- if there are any complications during the operation…who is our priority? Mom or Baby?"
In my 10 years of professional nursing, through countless life and death emergency situations, I had never been so completely unprepared for a situation, so at loss for words nor so completely devastated as I was in that mille-second of indecision. How do you answer that? What could I say? Why was the room spinning, why were my knees buckling and why couldn't I see straight? OMG! Here was the WAY to real possibility that my wife, my son, or possibly both would not make it through the morning! In disbelief, I struggled to gasp "BOTH OF THEM!" 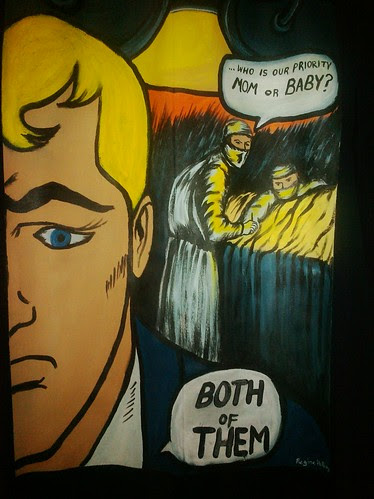 With a grunt, the doctor wheeled about and left me standing in the empty hallway, slumped against the wall, disoriented, distressed and summarily dismissed- drowning in my uncontrollable tears and the inhumanity of our healthcare system.
AJ Browning was born at 31 weeks, 3 lbs 11oz, after nearly a month both he and Phoebe were able to leave the hospital and come home. He is a 44lb 3 year old in the 97th% and Phoebe is healthy and expecting our second child in October 2011."
I painted Matthew’s jacket in a very different style than my usual work.  It is loosely based on the pop art of Roy Lichtenstein and the comic art in the Marvel periodical of the 1970’s called Night Nurse.  I chose this format, as our culture often under-appreciates the emotional power of the graphic image.
So in this frame I imagine the frantic nature of the surgery room.  The larger than life version of Matthew’s head takes over the frame.  He is voicing his refusal to choose between his child and his wife.  He tells the room, he tells the world, to save both of them.  Then he sinks into despair.  I wonder if he looked upon his hands as Rock-Biter had.  Those strong hands had nursed so many, had helped many others, but at this moment they were empty.   And Matthew was so very alone.

I am so glad that Matthew joined The Walking Gallery.  Each Day he walks in his jacket he will spread his story and spread awareness of the potential of advocacy and the importance of treating people with compassion.

He is one of many.  We are no longer alone in our suffering.  We are a great and mighty wall. 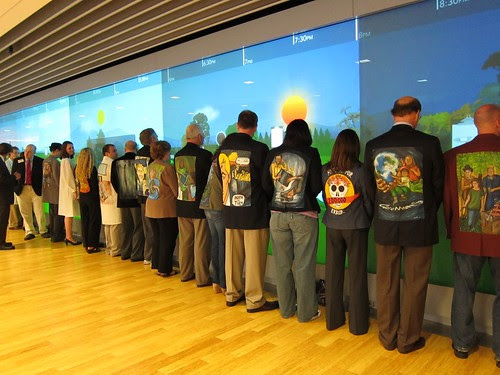 Posted by Regina Holliday at 7:31 PM