Last winter I presented a speech before Centers for Medicare & Medicaid Services (CMS): Quality Net Conference in Baltimore, Maryland, on Thursday, December 2, 2010.  That day I met two very important people: one was Dr. Charles Denham and the other was Carolyn Scott, V.P. of Performance Improvement & Quality, Premier, Inc.  She gave a great presentation.
And my speech followed her performance.  Not long after the event she told the staff of Premier about my speech and suggested they contact me about delivering a keynote. Karen Holtz, Director of Collaborative Execution soon called me up.  I told her I would be honored to speak.  But in addition, I would love to paint onsite.
On Monday at 2:00pm, Carolyn Scott gave a marvelous speech.  She began with a slide that that combined a Nascar Race with the Logo of Quest.  During the entire conference the motif of a race would be repeated throughout. As she spoke, I immediately I began visualizing her words.  I call her painting “The Turtle’s Path.” 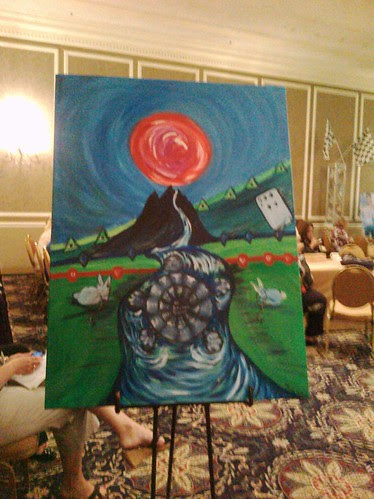 In this painting, a blue sky is filled with a crimson sun.  It is the magic hour.  It is sunset or sunrise, but any picture taken now will be amazing.  The Sun within the painting swirls with the emotional intensity of the crowd listening to Carolyn’s speech.  Below this sun, three data lines rise forming the horizon.  This is the chart depicting Case mixed adjusted cost per discharge. 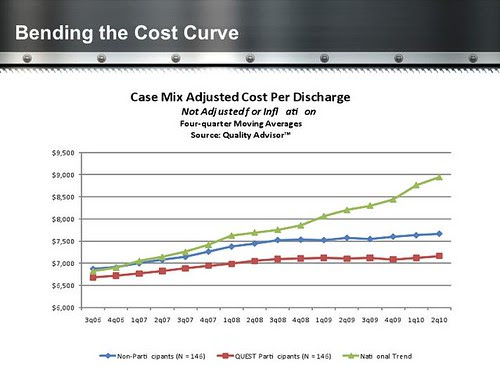 The first line is the national trend from Carolyn’s Slide Set.  This line is green with a series of triangles.  On these triangles I painted little eyes and they represent the dollar. 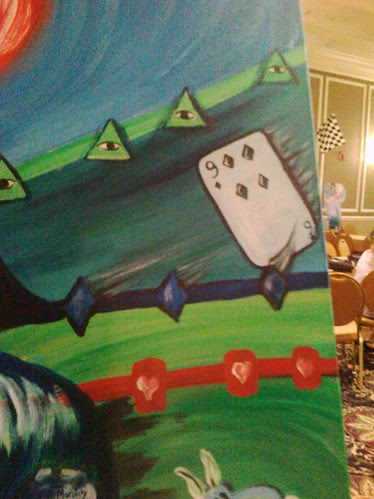 The next line is the compare hospitals that have not adopted Quest.  Blue diamonds represents this line. There are five diamonds on the line that have descended from the playing card: the Nine of Diamonds.  This card is often called the Curse of Scotland as legend has it as it represented the coat of arms of Sir John Dalrymple, First Earl of Stair who authorized the Glencoe Massacre in 1692.  Finally, there is the red line representing Quest hospitals.  This line is a series of squares with hearts upon them.   These hearts represent the great care Quest hospitals wish to provide for their patients. 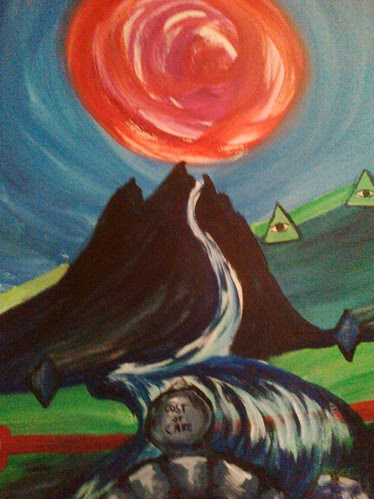 Amidst these data lines, a mountain rises.  This is the logo for Quest.  A river pours down the mountain into the foreground of the painting.  In the center of this river is a Turtle.  Carolyn used an info-graphic in her slide set that looked just like a turtle so I painted it as one. 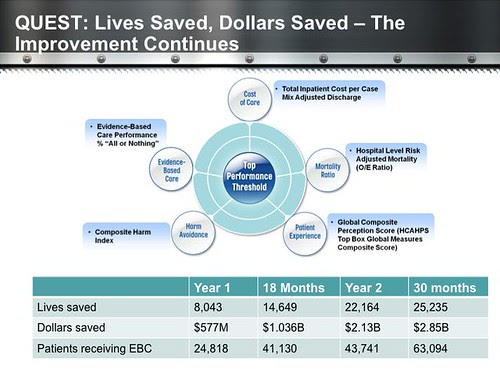 This turtle swims upstream against the current.  This turtle represents all of those hospitals that are trying to make things better for patients. 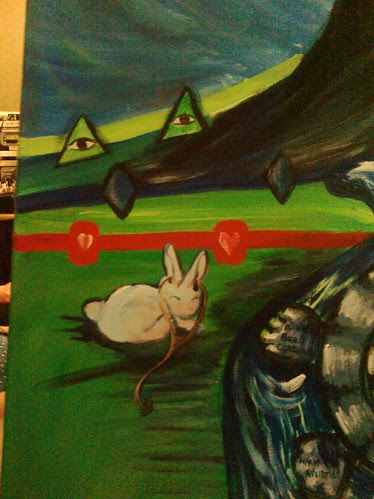 Beside the flowing banks of the river are rabbits wearing stethoscopes and they are asleep.   They are the providers who come out of the gate running, leave the conference inspired, but six months later have nothing to show for it.  The Quest providers are the turtles and at this point there are over 250 turtles.  As one Quest member from Hawaii explained, the Turtle is mighty and wise.  Or as Stephen King writes in the Gunslinger Books, “See the Turtle of Amazing Girth, on his shell he holds the Earth.”
And speaking of Stephen King, I spoke after Carolyn.  I spoke of Fred and our love, Buffy, toys, art, Stephen King and Autism.  I spoke of electronic medical records access, end of life care, the speak-up campaign, hand washing and The Walking Gallery.  I ended with my poem “The Wheals on The Bus.”  The audience cried and laughed.  And just like the last time I spoke with Carolyn, the audience rose to their feet.
The next speaker was Blair Childs, Senior Vice President, Public Affairs, and Premier Healthcare Alliance.  His speech was entitled “Pay-For-Performance: Are you prepared?”  He had a lot of interesting things to say.  Later in the evening I debated with him about patient participation and it’s meaning in within public policy.
On Tuesday June 14th, I was so excited to hear Julie Kennedy, RN, Coach, Studer Group speak about HCAHPS in her Plenary Keynote.   I would get to paint about HCAHPS once again.  This is a painting about her speech and it is entitled: “Generational Health Care.” 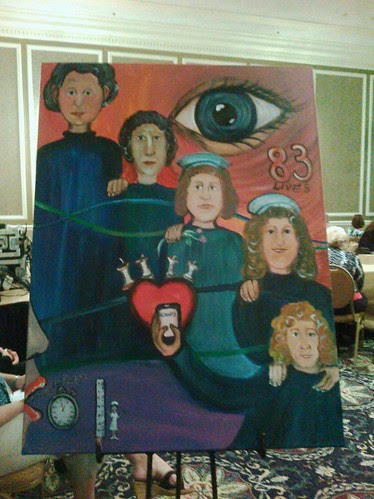 Julie began her speech talking about her medical pedigree and credentials.  I began to be frustrated as insistence on credentials and academic language can often create barriers for patients.  But Julie began talking about an entirely different type of credentialing.  She is part of five generations of medical professionals.  So in this painting is her Great-Grandmother a midwife, her Grandmother an herbalist, her mother a nurse, Julie a nurse and her daughter who is in training to become a nurse.  Each body is depicted as rising rectangles: they are a bar chart.  One of the key elements within Julie’s speech was the realization that every bar chart and graph represents real lives and real deaths.  As she stated, “Remember… the Numbers have Faces.” 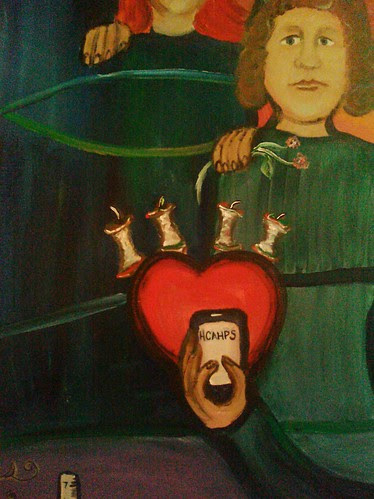 In Julie’s daughter’s hand is a smart-phone with a HCAHPS app displayed.  She is helping create a culture of always.  This is the heart of rounding.  HCAHPS coupled with core measures will create better patient outcomes.  Hence the smart-phone is framed with a heart and surrounded by a halo of apple cores. 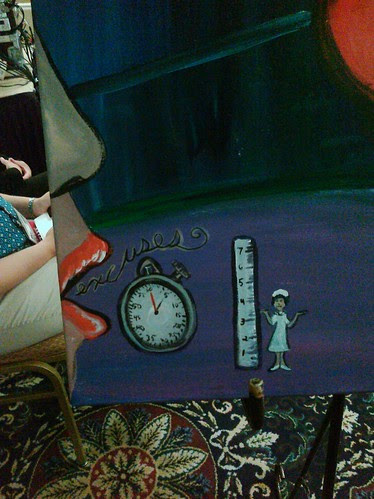 In the lower left side of the painting, lips exhale the word “excuses.”  Julie continued her speech by saying a culture of always was possible and the common excuses were not acceptable.  To often she hears “We don’t have time for that” or “We are short staffed.” I depicted this in the painting with an image of a stopwatch and a very tiny nurse.

To the upper right of the painting is an eye.  This is the patient’s eye, the caregiver’s eye, and the nurse’s eye.  This is the oversight that makes rounding and HCAHPS work.  And finally, the number 83 is painted upon the canvas representing the amount of lives saved at another facility’s due to their decision to embrace harm avoidance protocols.
Next, I attended a break out session on UTI’s.  I very much wanted to attend this session as Fred suffered greatly from lack of proper urinary track care.  This session was called “HARM: Using Lean Strategies to Reduce CA-UTIs” it was presented jointly by Laura Bell, Assistant Vice President and Genia Odom, Director Process Management East Alabama Medical Center.  This session inspired the painting  “Avoiding CA-UTI.” 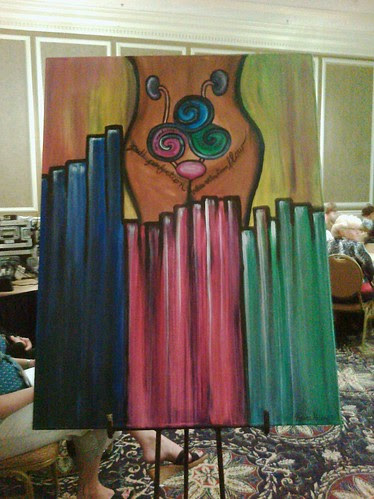 Again the bar chart motif repeats within this painting, but this time it almost appears to be a fence separating the provider from the patient. In the center of the painting a woman stands.  Her bladder and kidneys are clearly depicted.  During the speech an info graphic resembling a Venn diagram was used.  On that diagram were the words:  strategy, epic capability and culture change.  I turned the Venn diagram into a triskelion symbol as I thought it more in line with the kind of culture change that Laura and Genia were promoting. 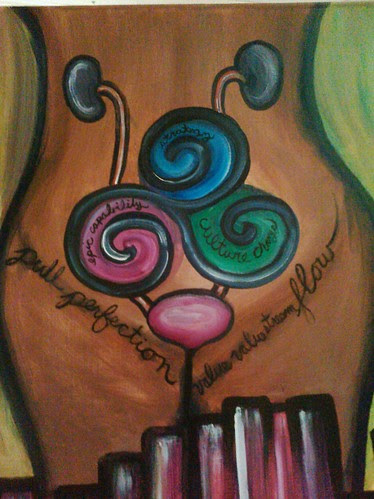 During their speech they showed a wonderful poster depicting the proper placement of a catheter bag on a hospital bed.  During the Q&A, I asked them “Do you place that in every patient room that a patient is currently using a catheter, so that the patient and caregiver can insure proper use?”  The answer was no.  They had not thought of doing that, but because a patient was part of a Q&A they are thinking about it now.
A speed networking session began at 11:00am and continued until 12:30pm.  It was brilliant!  It was like speed dating, but between facilities and providers and from that session, I created my favorite piece from the conference:  “The Three Iris Eye.” 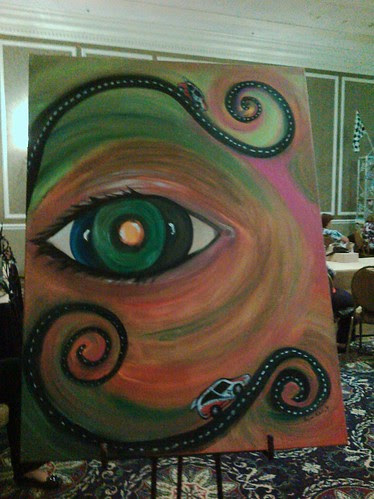 There are three different irises because each person met a great number of new contacts during this session.  The pupil in the center is a camera lens.  Hopefully, some of the participants will utilize their photographic memory and remember the brilliant ideas of their peers. 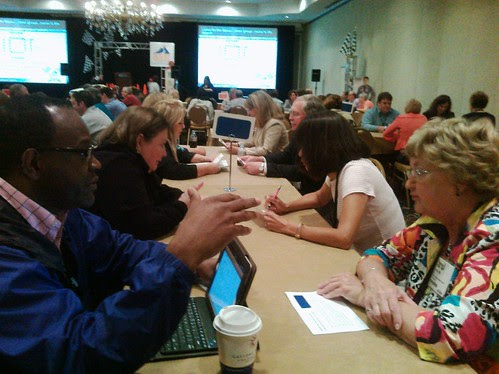 Each session was over in a matter of minutes and the sound of a revving engine would encourage each pair to separate and find another match.  So in this painting there are two Nascars one is painted with the logo for Christus St. Vincent Regional Medical Center and the other is Saint Louise Regional Hospital.  As I painted these two different yet similar logos, I thought about the race we had talked about for the past two days. 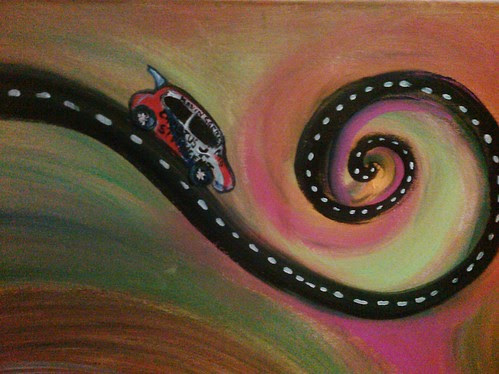 As I painted I thought of my favorite Bible verse that for the past three years has graced my Facebook page, “Do you not know that those who run in a race all run, but only one receives the prize? Run in such a way that you may win.” 1 Corinthians 9:11 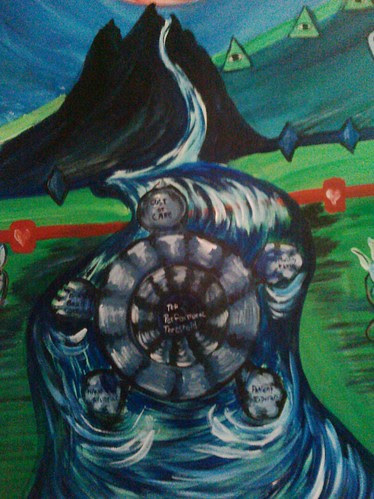 The wonderful folks at Quest may be turtles, but slow and steady shall win the race.  And trust me I have watched them speak and have painted their souls.  They run is such a way that they shall win. 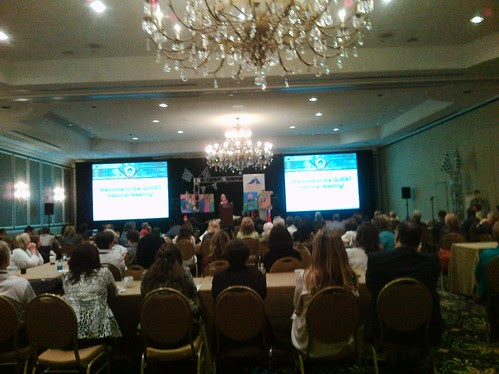 Posted by Regina Holliday at 3:57 PM